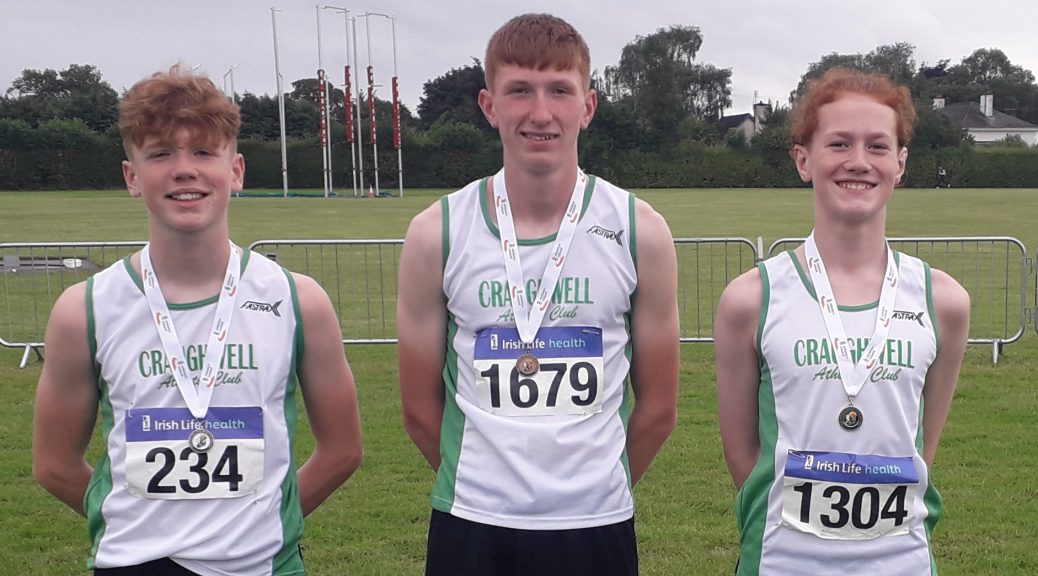 As Mayo were knocking Dublin out in Croke Park, Craughwell were engaged in some giant-killing of their own in a wet and windy Tullamore on day 4 of the National Juvenile Track and Field. As usual there were massive highs and lows and the standards were sky-high. Craughwell had another superb day winning a total of 5 medals – one Gold, two Silvers and two Bronze to take our total medal count to a whopping 15 so far – no Connacht club has more!.

The race of the day or perhaps the championship featured Conor Penney in an all-out sprint hurdles battle with Sean Hoade. The two training partners qualified with runs of 12.22 and 12.38 respectively and really brought the best from each other in a cracking final. Direct link to watch the final in the video below:

Just like in the Connachts, pushed each other to the wire, but this time the order was reversed as Conor edged Sean out by the slimmest of margins – 12.04 to 12.05.

Oisin Davis and Sean Cotter lined up for the 1500m in a large field. It started out a slow and tactical affair, passing 300m in 51s, at which point Sean took the lead for about 200m with Oisin tracking a couple of places behind on the rail. As the race moved through 700m the two lads found themselves in bad positions as athletes came around the outside. Sean was in 4th at this point and Oisin in 8th and both were quite badly boxed in.

Stuck in the crowded position, Oisin took stock and made a smart move between the 700m and 800m mark, deliberately slowing up to allow a few more past him until a gap emerged which allowed him to move out without getting into any energy-sapping argy-bargy. Even though he had dropped a few positions, it enabled him to move smoothly up the outside from 10th to 3rd over about 80m. The race was anything but slow at this point! With 350m left to run, Oisin threw caution to the wind and went for it. After a brief attempt to catch McGinley in the lead, he settled for the “bird in the hand” and held onto second with a nippy 58s final circuit to win his first national individual medal, in his last ever Juvenile track race! Clutch!

Sean held on strongly to finish in 8th in 4:10.26, a very solid performance given he has had some broken training recently with work and studies. Sean has a stack of national medals at home and is hungry for training so won’t be long adding to them!! Watch the race in the direct link video below:

In the u18 Girls, Emily Miskella had a strong run to finish in 7th position with 5:13.66. The time is deceptive – after a slow and tactical first lap and a half, this race wound up tremendously over the final two circuits and this change in pace didn’t quite suit Emily today. 7th in the all-Ireland is a solid result and definitely something to build on coming into the cross country season!

U14 Declan O’Connell came into the championships with good expectations, and for very good reason – he won the Connachts in such dominant fashion with an incredible 4:31 clocking which would typically medal easily in the championships. He took the lead early today and it was only then we learned how strong his age group really is as he found himself in the unfortunate position of having a large field of talented runners on his shoulder for most of the race.

They went through 300m in 51s and he was still doing all the work as he stretched the field through the bell in 3:22. It all changed over the last 200m as Declan started to fend off several energy-sapping challenges and the ultimate winner of the race came through them all with an absolutely storming last lap of 64s to win. Declan tried valiantly to hold his position but it is nearly impossible to fend off multiple waves of attackers as the surges are hard work and he ultimately slipped to 6th in 4:34.95. Declan is a phenomenal talent and his day will definitely come as he learns from this! It’s clear now he has an exceptional age group to challenge him which can only be a good thing – nothing good comes easy!!

Jump success for Jade and Evan!!

If there were a national medal table for Jumping, Craughwell AC would have crushed the rest of the country – winning twice as many medals as the next most successful club (Leevale AC) and this continued this weekend with two more to the tally.

In the Long Jump, Evan Hallinan won a terrific Bronze medal to add to his double-medal haul of last weekend. Evan cleared 6.27, just a cm off Silver and two cm off Gold!!. Evan Quinn came 13th with a fine clearance of 5.14. Grace Keaveney was 7th in the u16 Girls Long Jump with 4.45 and Holly Shaughnessy was 12th with a leap of 3.67m.

Andrew Power made some fine throws in the U17 Boy’s Javelin and finished 7th with a best of 31.35.

Here is a picture of that hurdles finish again – magic stuff from both lads!