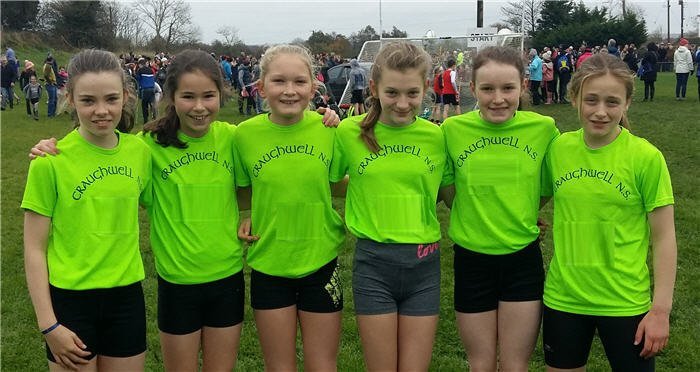 Craughwell NS continued a fine tradition of success in the Connacht Primary Schools Cross Country Championships which were held on the impressive grounds of St Brigid’s GAA club in Kiltoom, Co. Roscommon at the weekend. The school’s excellent record in these championships goes all the way back to 2003 before any of this year’s athletes were even born when the Craughwell Senior Girls team claimed the Connacht Cross Country title for the first time with Cathriona Farrell 10th, Ashley McDonnell 13th, Yasmine Tobin 24th, Rachel Kenny 41st, Cianna Greene 44th and Jane Healy 51st.

Last Saturday saw Clodagh O’Meara join an elite group of athletes from the school when placing 9th in the race – the highest position ever achieved in this race for an athlete from the school and a fantastic achievement for a very hard-working athlete. Clodagh led her team to the team silver medals with Aisling Whyte 24th, Grace Keaveney 37th, Chloe Hallinan 58th, Siofra Davis 59th and Erin Kelly 69th all running strongly to produce a great team result. Fauve Aylmer also put in an amazing run for Coldwood NS when placing 7th in the race with a storming finish, one of the highest ever finishes in this race by an athlete from the club and a just reward for another hard-working athlete. And in the Senior Boys 1200m, Daniel Galvin (Ballymana NS) had a super run to claim the final individual medal when taking 15th place in a race that continually features the highest standard of running in Connacht for these age groups.

For Craughwell NS this was the 8th time in 15 years that the school has taken team medals in the Senior Girls race and the 7th time in 12 years that they have done so in the Junior Girls race – the most successful school in Connacht in girls’ cross-country in the last 15 years. Full details of past performances and athletes finishing positions are here. I will try to compile similar information for other local schools. Official results from the weekend are here,.