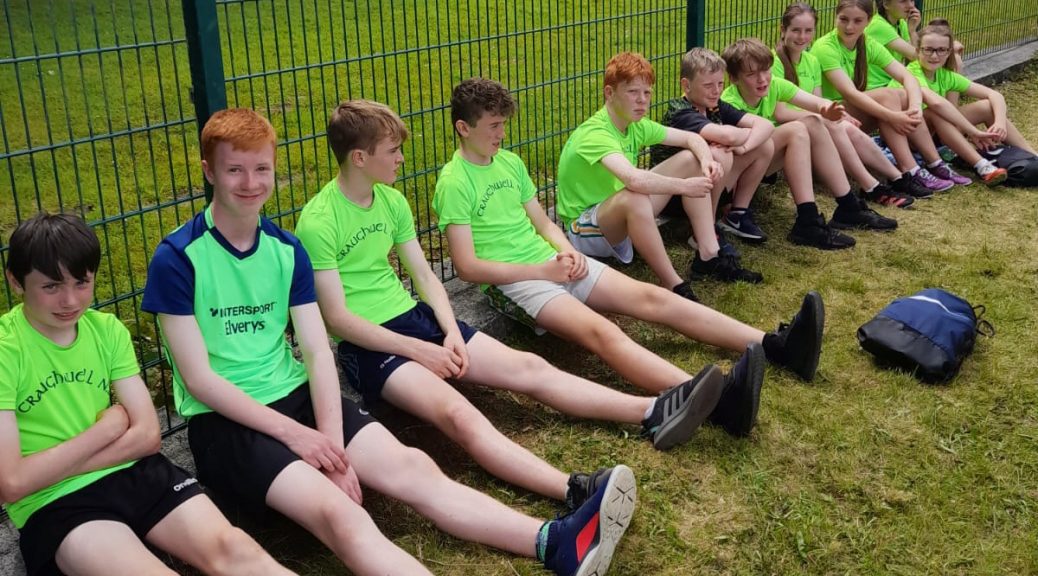 Craughwell NS has had many a fine day at the Galway City Sports since first taking part all the way back in 2005, featuring on the podium countless times including 10 times in 2010 and again in 2015.

But yesterday in Dangan the school enjoyed its finest day yet, making the winners enclosure on no less than 16 times during the day including a clean-sweep of the gold medals in the 6 relay races. It was an astonishing performance and underlines the depth of talent in the school at the moment.

Huge thanks to Stephen Casserly and his colleagues in Cumann na mBunscoil for a superbly organised event. Check out also John O’Connor’s brilliant pictures of the day on his Flickr/Edenhill77 page.

The day kicked off with the heats of the distance races with Alan Hallinan and Zack Keane first into action in the U13 Boys 800m. Alan comfortably qualified for the final with Zack unlucky to miss out with a 7th place finish when top-6 went through to the final. In the Girls 800m, Emily Hewitt and Jenna Brady had great runs to place 8th and 9th in their semi-final. In the U11 Boys 400m, Darragh O’Donnell and Noah Kinneen both ran smart races to make the final as did Niamh Keaveney and Sophie Meehan. And in the semi-finals of the U9 400m, Kaci Madden and Orna Murray both had super races to make the final while Conor Mannion and Jack Hibbitt comfortably qualified for their final.

Next up were the sprints which would be followed by the middle-distance finals – with the U13 sprints first, then U11 and then U9. Oran Collins and Rian Middleton both got through round 1 of the U13 Boys 100m as did Beth Glynn and Kayleigh Rabbitte in the Girls 100m. Ruby Maher, Emily Raftery and Ethan Beattie repeated that feat in the U11 80m with Edward Donoghue unlucky not to progress, just missing out in 4th place by the slightest of margins. In the U9 60m, Taylor Flood and Aaron Burke qualified with great runs in their heats, with Roise Beattie and Isabel Maher also having great runs and making it into the semis. It was very difficult to get out of the semis with only 2 qualifying from each race – but super runs from Oran, Beth and Kayleigh saw them through to the U13 finals and the same for Taylor and Isabel in the U9 races.

The finals were next – 3 races within an hour now for these tough athletes – with Beth and Kayleigh first in action where they had an absolutely magnificent run for Beth to take the silver medal and Kayleigh the bronze in a very close fought battle amongst the 7 finalists. Oran went one better in his U13 100m final, tearing down the track and taking the gold by around a metre – a fantastic achievement. And in the U9 60m, Taylor had a fantastic run to take the bronze medal in a blanket finish of the top 6, while in the girls Isabel very narrowly missed out on the medals with what looked like a 4th place finish.

What a start to the day for the school with 4 sprint medals!

Onto the middle-distance finals and Alan Hallinan was again up first where he settled into the pack for the first lap. In around 6th place at the bell, Alan just shifted gears with around 300m to go and ran away with the race, taking the victory by at least 50m with a super performance to the rhythmic chant of “Alan-Hal-inin” from his classmates. Darragh and Noah were swiftly into action next in the final of the U11 400m with both getting off to a strong start and Darragh breaking away with a leading group of 3. With around 200m to go, Darragh moved into 2nd place and looking like he was going to overtake the leader. But the leader got another burst of energy to just about maintain his lead with Darragh racing to a super silver medal and Noah a little further back. The U11 girls were up next with both Sophie and Niamh again getting good starts. Sophie took an earlier lead after 100m, a lead which she never relinquished – adding to it as the race went on and finishing 10m or 15m clear at the end to take the gold.

The U9 Boys 400m was off next with Conor Mannion and Jack Hibbitt proving again why they are All-Ireland Champions – moving into 1st and 2nd from the first bend and literally racing away from the field in a massive battle between the pair of them for the Galway title. As they reached the finish line, Conor just edged Jack in the battle by about a metre and with over a 50m gap back to the rest of the field – an incredible performance from 2 super athletes. And in the last of the distance races with the U9 Girls 400m, Orna Murray and Kaci Madden both had super races with Orna racing to a brilliant bronze medal.

Incredible performances – 3 titles from the 6 middle-distance races as well as 2 silver and a bronze.

And the final events of the day were next with the 4x100m relays with U13 Girls then Boys, then U11s then U9s in action.

The U13 Girls lined up for the semis with Kayleigh Rabbitte passing to Sarah O’Gara passing to Saoirse O’Donnell passing to Beth Glynn, with sub Melissa O’Connor waiting in the wings should any injury befall the starting quartet. The girls qualified comfortably winning their heat. The boys were up next and did likewise with Eoin Middleton to Callum-James Payne to Jack Doyle to Oran Collins, with subs Jack Cahill and Eanna Morrissey.

Next the U11 Boys with Eoghan Boisclair to Ethan Beattie to Danny Cahill to Darragh O’Donnell and subs Brian O’Gara, Rian O’Donnell and Noah Kinneen, following by the U11 Girls with Emily Raftery to Ruby Maher to Cerys Johnston to Sophie Meehan with subs Isabelle Behan, Evelyn Hewitt and Niamh Keaveney. Again both teams qualified for the final as winners of their heat. Final relay heats with the U9s. And again both teams won their heats with the boys having to do some hard work in the final leg to take top spot. The girl’s team was Blanka Cygan to Roise Beattie to Abigail Machaj to Isabel Maher with subs Kaci Madden and Orna Murray with the boys team Taylor Flood to Jack Hibbitt to Jack Melia to Conor Mannion with sub Aaron Burke.

So all the relays through to the finals and all winners of their heats!

The girl’s final was up first with the same quartet as for the semis – it was neck and neck the whole way with the team marginally in 3rd place as Beth Glynn received the baton at the final changeover and had a storming finish to take the victory on the line by less than a metre – a fantastic finish!

For the boys U13 final, we made 1 prearranged change to swap Jack Cahill in for Callum who had had a brilliant run in the heats but knew we were resting Jack’s knee for the final as he regularly gets injured. And in the final the boys again had superb passes to be in the lead coming into the final changeover and handing off to the individual sprint champion, there was no doubt about the results as Oran Collins raced down the home straight to take another relay gold!

The U11 Girls were next with another prearranged swap with Isabelle Behan swapping in for Emily Raftery as the first runner and the girls absolutely blitzed it to take another relay gold with fantastic baton changes and Sophie Meehan crossing the line as a comfortable winner.

We had already surpassed our best ever relay performances at this stage, never having won more than 2 gold medals in the relays in previous championships.

Onto the U11 Boys 4x100m where again we stuck with the same format as for the heats and another incredible performance with Darragh O’Donnell receiving the baton in a tight 1st place and racing home to victory to continue the winning trend.

Two relays to go – with the U9s Girls first where we had another prearranged swap with Kaci Madden swapping in for Blanka Cygan as 1st runner. And again, an absolutely fantastic performance saw Isabel Maher receiving the baton in first place in the final changeover and racing to victory.

And the final race of the day where we possibly had our strongest team with 3 of the team having medaled in the individual events – but also the toughest race as we knew from the heats where we had a big battle to win the heat. We again stuck with the same format and the race proved even tougher than the heats with 2 teams ahead of us when Conor Mannion got the baton in the final changeover but he powered down the home-straight to overtake the opposition and take the victory by around 2m.

It was some performance by all of the teams – perfect changeovers, perfect sprinting, perfect focus and perfect behavior by all the athletes. They are an absolute credit to the school and their parents and we in the athletic club are supremely proud of them. They are not all in the club but most have been at some stage or other during their school years and our coaches should take a big bow too as without the tireless work they do every week, this couldn’t have happened.

And a massive thank-you to the school and Mr. Mitchell for the great support of athletics. It’s an assembly line of athletes for the club, many of whom have gone on to win All-Ireland titles and represent Ireland internationally. And a final thanks to Janeanne Meehan who helped with myself for a few coaching sessions in the school and with the team selection and brought her winning-ways with her!

Check out the attached for the history of the school’s performances and some of the elite athletes who have featured in the past.