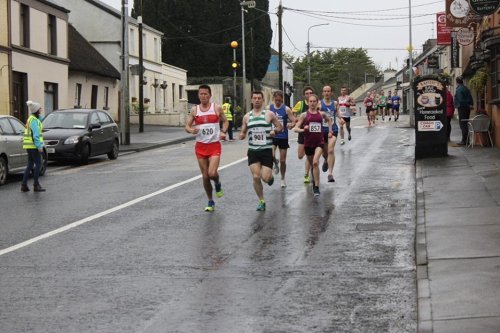 Craughwell 10 mile road race Sunday March 19th, 2017
by winner Laura shaughnessy
The Craughwell 10 mile 2017 race will forever be etched in my memory for all the right reasons. I had heard good things about this race since its inception but, at 10 miles, a longer distance than I had ever raced previously, I had been advised not to do it until I was ready.
Last year I was just getting back into structured training at this stage after a long lay-off with injury. I had also worked a 24 hour shift on call the night before so it wouldn’t have been wise to race! I’d have to bide my time for another year. Where did that year disappear to? 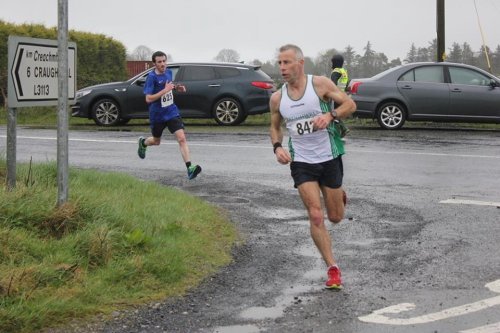 I think runners always question their preparation but this time, I felt I had nothing to lose so when the Craughwell race was mentioned after the Fields of Athenry, I pencilled in my next trip home…
My first 10 mile race was a step into the unknown but one that I’m glad I took because I really enjoyed the entire experience. I had a rough idea in my head of what time I’d like to run but I knew that I would have to start conservatively in order not to jeopardise the later stages of the race.
I ran approximately the first 3 miles with the lead pack of the South Galway AC pair of John Whiriskey and Greg Lundon, host clubs Tom Prendergast, Rob Lennon of Castlegar and Gerry Carthy of GCH.
I felt very comfortable but knew there was a long way to go but the lads encouraged me to go for it so I pushed on and didn’t look back. I kept my eyes on the lead motorbike and enjoyed the novelty of running on the country roads with only the cows in the fields mooing me on!

At Kilconieron church a pocket of supporters were surprised but supportive seeing a girl in the lead. When I rounded the corner at Dunsandle cross, another group of supporters told me that I had a good lead and that I looked strong. I was encouraged until I was hit hard by the head wind that I had to battle to the finish line. At that stage it didn’t really matter, the miles were flying by and I knew that, even if I was reeled in, that I had ran a good honest race (my favourite type instead of tactical affairs!) and I was happy with my effort.
A stitch in the last mile was annoying but probably the best time for pain – when you’re expecting it!
Coming in to the final stretch, I could hear the praise of Mary Porter on the PA system and I could see the gantry clock ticking towards 58 minutes. I crossed the line in 57.59 and one of the first people to congratulate me was Tom Finnegan, whose family gave me lifts to training and races throughout my time with Loughrea AC. It was nice to celebrate the moment with someone who had encouraged me in my early athletics days. 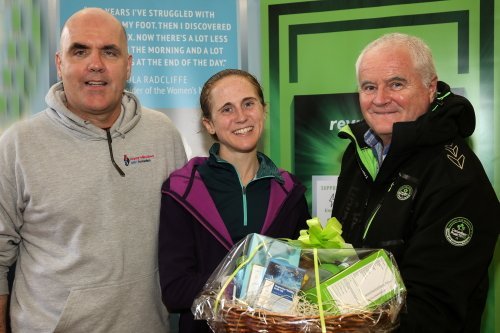 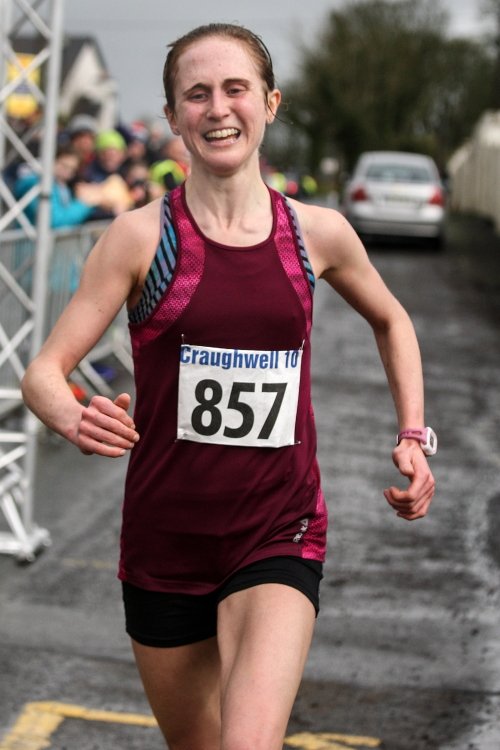 I quickly caught my breath and started walking back up the final stretch to cheer on my friend who had travelled from Dublin. I hadn’t long to wait and we were both delighted to have survived and not struggled as much as expected!
Returning back to the community hall, we couldn’t believe the reception, between the kind words of congratulations and the feast of food that club members had contributed to the post-race spread!
It was great to chat to Galway athletes that I hadn’t seen in ages over a nice cup of tea and treats.
Thanks to Craughwell AC, Revive and other sponsors for the lovely hamper and prize that I will put to good use. I definitely intend to return to race the Craughwell 10 again and, with a bit of luck, I will run faster at subsequent attempts over the distance.

Congratulations to Craughwell AC and all involved on staging a super race!
many thanks to andrew talbot , john o’connor and anne lyng for photos in article.
Comments are closed.