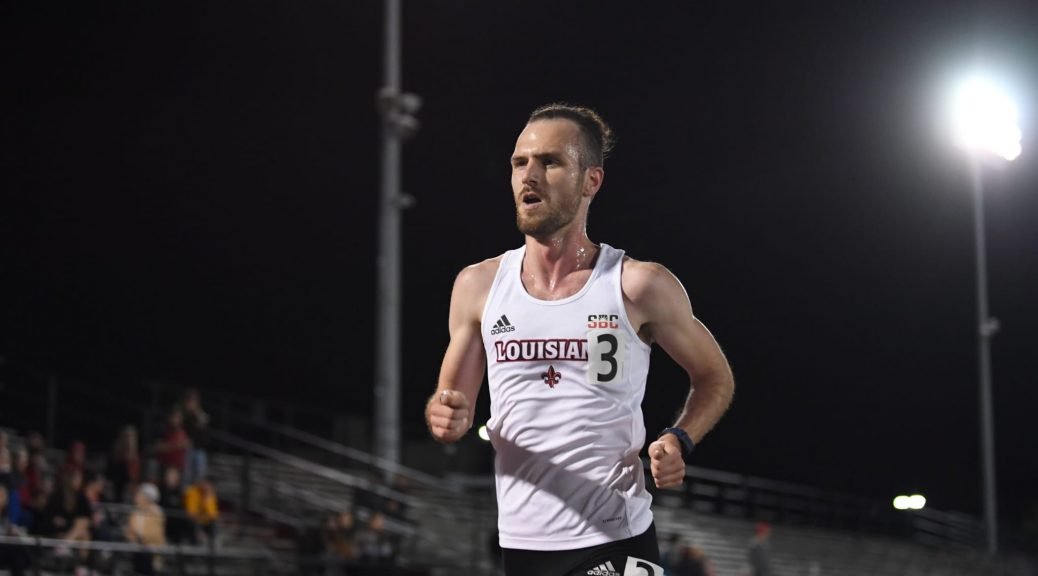 On a windy weekend in Lafayette, Louisiana Damian O’Boyle was back in action for the Ragin’ Cajuns for the first time after a couple of poor seasons in Track and Cross Country since 2021 plagued by chronic Achilles problems. It’s been a long journey but after platelet injections, three different therapists and two different orthopedic specialists, “the old man” as he has become affectionately known as in Lafayette appears to be well back on the right track.

The Ragin’ Cajuns opened their outdoor season this weekend at home in Lafayette, LA with the annual Louisiana Classic. Damian lined up in the 10,000m on Friday night with a pretty strong field and proved his training of late with a controlled and measured performance over the distance recording a new personal best and club record time of 31:13.04, breaking his own club record by a staggering 40 seconds set 4 years ago at the Southland conference meet. Not to be out done by the current squad of Craughwell young guns who appear to be breaking records all around them on an almost weekly basis, Damian lined up again early Saturday afternoon in the Steeple Chase just to shore up one of the only other club records he still holds.

After getting out well this race definitely looked to be a much more exerted effort on the now,
man-bun sporting poser. Likely exasperated by the race that was still in the legs from less that 16 hours earlier. Damian still managed to record a personal best in the event running 9:53.80 a shave off the old record of 9:56 that he set all the way back in 2014.

By all accounts Damian clocked up a total of 25 miles over the two days between racing and warming up/cooling down. Hopefully this is the start of a fresh bout of consistency from the 25 year old and shows great progress from a man who struggled to break 9:10 for the 3000m metres only a mere 8 weeks ago.