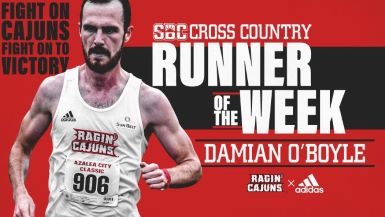 Damian was awarded weekly honours this week by the Sun Belt Conference after a fine performance to take the title for the Ragin’ Cajuns at the ULM Warhawk Invitational Monroe, LA last Friday, being named Athlete of the Week, for the first time in his collegiate career over the last 5 years. The award is given to the athlete with best performance from any institution within the conference, so Damian was the top performer from all 10 schools this week.
In true American fashion the field was small, and the course was fast and flat for the meet held last week in Monroe, with only three schools on the start line in both the men’s and women’s events. Damian led the charge for the Cajuns with a fine display of measured tactical running to take the men’s title over the approximate 4-mile distance in a time of 20:33.
In the men’s race the entire team of athletes from LA Tech broke fast and controlled the pace and the race through the first mile and a half, only to slowly be reeled in by Damian, and teammate Key Alfred who finished fourth on the day. As they approached the two mile marker the Cajuns finally split the field with Damian beginning to put the pressure on as he made a move for the front only to be tracked mercilessly by the lead athlete from LA Tech. They battled back and forth over the last 2+ kilometres with Damian pushing the pace faster with every turn until finally winning the mental battle with little over 400 metres or so to go, allowing him to cruise to the line in first place, if somewhat cautiously as he checked over his shoulder, to lead the men’s side to their second silver finish in as many meets thus far this season.
Might be worth mentioning that this is also only the Third time ever that Damian has led the way to the line in a Cross-Country race and the first time to do so stateside. The first occasion having been as an U14 at the Galway Championships all the way back in 2010 and the second when he took the title at the North Connacht Schools for Ballinode College of Sligo in 2016.
Three weeks prior Damian showed a similar display of leadership bringing home team silver on that occasion at the Azalea City Classic which was held in Mobile, AL which was a preview of the course which will host the Conference Championship event this year. A little sluggish and rusty for the first race of the season, Damian was the first Cajun to the line in 16:11 over the 5k distance which placed him seventh individually on that day. Similarly, to last week’s race Damian was measured off the line, breaking from the chasing pack earlier in this race to tag onto the back of a six-man pack of leaders from hosts South Alabama. The lack of any competition since February evident as once carving out this position he was unable to move forward from this position and maintained this seventh position all the way to the line.
Damian and the Cajuns, are now in the backend of their season for this year with their first taste of the 8k championship distance coming in two weeks’ time when they travel further north still, to Little Rock, AR for the Little Rock Open. This is sure to be a solid precursor for the coming Sun Belt Championship meet, set for October 31, with a selection of conference teams expected to attend. This will then bring down the curtain on the US collegiate Cross-Country season for 2020.
Finally to mention that Hurricane Delta, the first ever Greek lettered storm to make US landfall in history, did so late yesterday evening as a Category 2 in Louisiana between the cities of Lake Charles and Lafayette both of the cities where Damian spends much of his time stateside. This is the second Hurricane to make landfall in the region in only six weeks after Hurricane Laura smashed through the same region which was still recovering from the damage with many homes still without workable roofing, tarps and debris still litter the city of Lake Charles which caused great concern ahead of this storm which prompted another evacuation order. Early reports have 800,000 without power across the state of LA, with thousands more outside the state reporting power outages. This storm appears to have dumped rain and flood water along its path, with a reported foot of rainfall near Lake Charles and an estimated storm surge of 9ft just south of Lafayette, the full extent of the damage is still to be assessed.
Comments are closed.