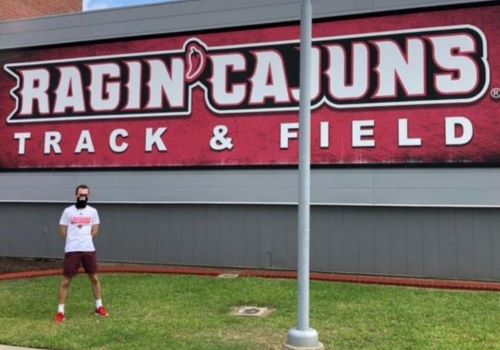 As the curtain closes on what has been an interesting outdoor track season here at home and around the world, we can now begin to cast an eye forward to what is sure to be a similarly interesting Cross Country Season, especially so on the far side of the Atlantic for Damian O’Boyle currently on his second Scholarship at the University of Louisiana in Lafayette.

First point of interest is that many of the conferences and colleges in the USA and the NCAA itself have already cancelled all sports for the fall semester amid concerns related to COVID-19. There will be next to no conference championship events hosted this fall stateside, including zero national or regional events. However, Damian is now attending one of a small number of schools in an even smaller number of conferences (The Sunbelt Conference) that have decided to implement a stringent COVID-19 limitation, reduction and testing policy within their athletic department. This sees athletes screened every day and tested for the virus on a weekly basis in order to allow them to go ahead with the regular fall sports line-up this year. We will see Damian in action at the end of this week when the Ragin’ Cajuns travel to Mobile, AL to open their season at the University of South Alabama’s “Azalea City Classic”.

And thanks to a ruling by the NCAA in response to the large number of institutions cancelling fall sports, we will see Damian return to the Cross again next year in 2021 with yet another year of eligibility!

All of this on the back of Hurricane Laura, a strong Category 4 Storm (150mph winds) which caused an evacuation order and battered the southwest coast of Louisiana, to be recorded as the strongest hurricane ever to make landfall in the state and the most brutal storm in over 150 years. While the city of Lafayette, where Damian is now based, managed to avoid much of the damage experienced, the city of Lake Charles which hosts his alma mater McNeese State has been devastated by the storm. With much of the essential infrastructure being compromised and both commercial and residential property taking severe damage, the city has been brought to its knees and is still without power and water as a result, with many of the city’s residents still displaced across the South.

Our hearts are with all of those that have lost so much to this storm and we wish the city and its people all the best in their rebuilding efforts and hope that they come out of this tragic occurrence stronger for the experience.