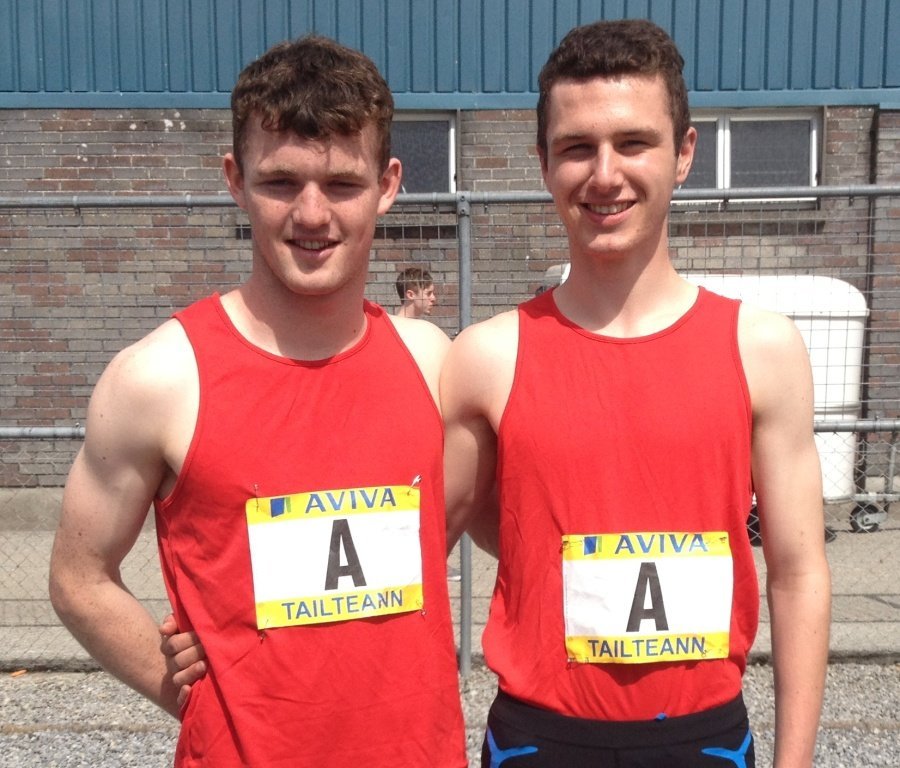 It was a fantastic day last Saturday for both Damien O’Boyle and Nicholas Sheehan who put in towering performances in the Tailteann Games which earned them selection for the Irish Schools track & field team that will compete in the Schools International later this month.

The Tailteann Games has existed in various guises over the years, being an ancient Irish competition long before tracks were invented! It was revived in the early days of the GAA before going out of existence again and being revived decades ago as the interprovincial schools championships.

Damien earned his international call-up with a comfortable victory in the 1500m Steeplechase in a time of 4.37.74 – a time that translates to sub 5 minute mile pace, something that is beyond most people’s ability on the flat never mind the steeplechase barriers and the dreaded water jumps!

Nicholas knocked a fraction of a second off Paul Joyce’s 800m club record when he raced to a time of 1.59.33 to take the silver medal by the slenderest of margins of one-hundredth of a second from EYOF-bound William Crowe from Sligo. In a nail-biting finish, Nicholas was holding 2nd place as he approached the line. A quick glance over one shoulder revealed a rapidly approaching opponent. As he refocused on the end line, the Sligo athlete appeared on his other shoulder. With metres to go and perhaps losing concentration slightly, Nicholas stumbled and slid across the line to take the silver – in the process shaving 0.2s off the club record as well as shaving his leg on the Tullamore tartan. Despite this mishap, Nicholas took to the field later in the 400m but not surprisingly was unable to produce his usual form and took 5th place in 53.42.

Their performances earn both athletes their first international vest in the Schools International on 20th July.

Another star on the day, John Cormican narrowly missed out on international selection with a bronze medal in the 1500m in a time of 4.14.22. This was John’s first time medalling at National level and an inspirational performance. The club would have almost certainly have gained another international slot were in not for injury to Jamie Fallon who was one of the favourites for the 3000m title.

A quick comment on the progress that the 3 medalists have made over the years which should provide major encouragement for all younger athletes:-

All 3 athletes have shown huge dedication over the last 2 years and are fully deserving of their success. I’m hoping that their times will inspire many of our younger middle distance athletes to similar glory in years to come because as many of those athletes will know, you have the talent – you only have to look at Damien, Nicholas and John’s times from a few years ago to know that you have similar talent and all you have to do is to keep the consistency over the next few years and you will be pulling on that Irish vest too!