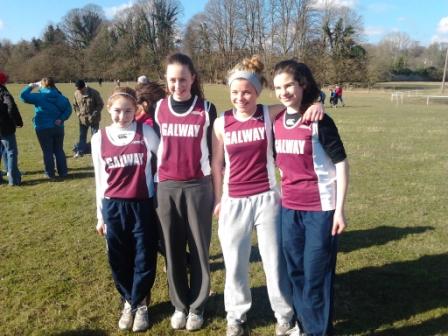 Having had to skip almost all of last year’s cross country season due to injury, the 2011 double Connacht Cross Country Champion Dearbhaile Walshe made a major impact on the Galway team contesting the National Cross Country Relay Championships in Tullamore where she anchored the team to silver medals.

Loughrea’s Arlene Earls put the team in second place with a strong performance in the first leg, handing over to GCH’s Maeve Hughes who maintained that position in style before passing to Ballinasloe’s Niamh Daly who put in a brilliant effort to hold that position. Collecting the baton in second place, Dearbhaile brilliantly held onto that position in a tight battle with Kilkenny and Offaly with the Leinster counties finishing just 2 seconds and 8 seconds adrift of Galway.