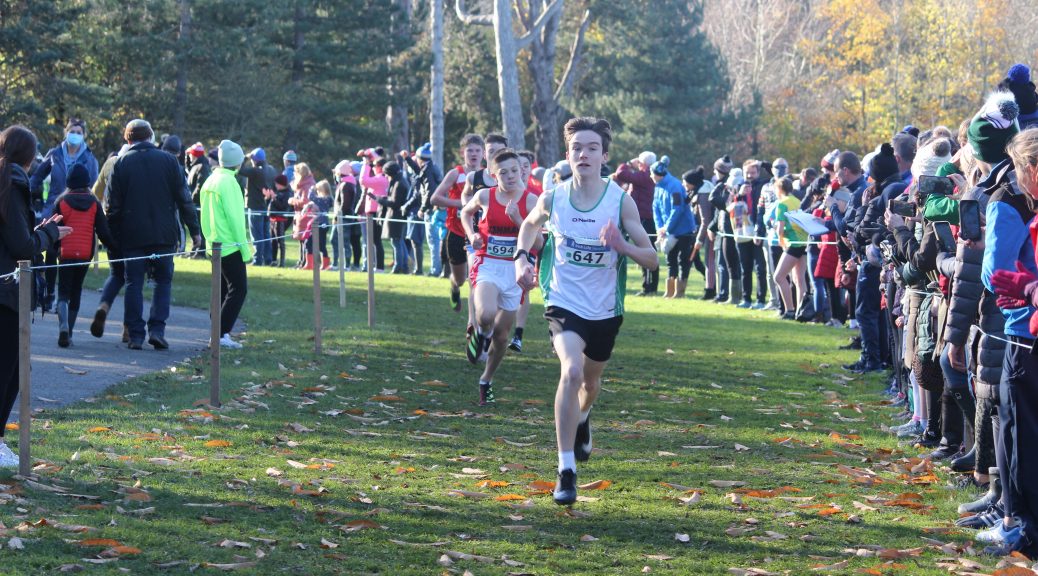 The day and course couldn’t have been more perfect as Craughwell had an historic day at the National Cross Country in Santry. As is typical with Cross Country – when held close to Dublin and the weather is fine, the competition is FIERCE! Craughwell had competitors in the U12 races, the u14 boys, the U18/Junior Boys/Girls and the Senior event.

The performance of the day came from Declan O’Connell and his u14 teammates. Declan has been imperious of late in Connacht and he delivered once again with the first ever individual national Cross Country win for the club. Declan sat in for the first 1500m of the race and then edged into the lead from there, pushing for home early spurred on by coach Ronnie.

He finished strongly a convincing winner by 10-12m. Declan was joined in the top-12 medal winning positions by teammates Stephen Joyce in 10th and Stephen Ruane in 11th who helped each other all the way. Keelan Moorhead had a cracking last km to empty the tank with a smashing 71st place finish to seal the teams with 93 points from a strong Letterkenny AC team. Brilliant running from all 4 lads, only the 3rd team to ever win a national medal from Craughwell! The same 4 were part of a team that won bronze 2 years ago and have great plans to stick with it!

Check out this fantastic interview with them by Pierce O’Callaghan of Connacht Athletics:

The three leading lads also led the County team to Gold and the Connacht team to Silver. The group were clanking on their way home with more metal around their necks than Mr.T. Well done to the lads and coaching team of Brendan Penney and Ronnie Warde who are nurturing these talents so well.

Alan Hallinan won an exceptional bronze individual medal in another outstanding performance, coming 3rd in the U12 race.

Alan covered the 2km in an exceptional 7:00 minutes even to lead his team of Oisín O’Donovan (54), Alan Warde (74) and David Frazer (82) and Oisín Fallon (169) to a superb 6th place finish from the 18 club teams and Galway to Silver medal in the County battle, edging out the Dubs – an outstanding achievement!

In the girls u12 race, Aisling Lavan was our sole competitor and she had a superb run to finish in 108th position in the huge field.

It is very difficult to get a team of Juniors together for some reason and in all the years of Craughwell AC, we have never managed to get a Junior team to the national Cross Country – this year was the exception as we had not one but two teams and it was a source of great pride to everyone! The girls ran first and did fantastic and finished as first Connacht club (14th overall).

Emily Miskella always delivers her best performance on the big day and she stepped up to have a superb run, finishing as 48th U18. The fast improving Anna Cotter (70) was close behind, stepping up in age. Anna was hotly pursued by Aoibhe Carr (85) in a strong run. Aoibhe has just returned to running this autumn and is already making good strides. We had a few drop outs with injury, transport problems and other reasons so it was thanks to Saoirse Moore our high jump specialist who really stepped up and completed our first ever Junior ladies team with a smashing run to finish in 113th in the huge field in one of the performances of the day.

Incredibly for a club with such a rich history of Junior talent, this was also the first Junior men’s team that we have fielded. We felt coming into it that this team had a strong chance of a medal if all went well, but alas it was not to be on the day as the level of the competition was too much for us on this occasion.

Sean Cotter led the lads home with a superb run to finish in 12th place overall (8th Junior), just 22s off European u20 Champion Cian McPhillips and a Eurocross spot. Sean has been sick all week so was not expecting such a strong run, ahead of many fine athletes including the national 1500m, 800m and Steeple champion. Oisín Davis was next in 23rd (18th Junior), followed by Kyle Moorhead in 70th place (43rd Junior) and Ross McGuinness in 105th place (31st u18) and Killian Walsh in 153rd.

Hats off to Ennis Track, in my opinion one of the best clubs in the country, who had 3 inside the top 11 to seal a fantastic win, despite one of their top talents being injured. They also won Silver in the u18 team to show every sign that Pat Hogan’s talent factory isn’t slowing down in Clare!

They won’t count as PBs as xc is not officially measured, but Jamie and William both had excellent runs in a 10k race which say 180 people finish under the 40 minutes and over 110 under 35 minutes! And the race was actually 10.3km so you could say that they ran up to a minute faster than that!

Jamie shook off his foot niggle from Bushfield and delivered one of the races of his life in the National Seniors to finish a fine 32nd in 32:16, second Galway Man and just behind Tokyo Olympian Paul Pollock, William tracked Jamie for the first few km but about 3km in, Jamie made a move, increasing his effort to overtake several, and William was not too sure if he could afford to go with him at this early stage so let him off and followed his own plan.

In the end it was an exceptional run from the two as William came home in 32:40 for 3rd Galway Man and 16th u23 overall in a heavily stacked field.

It was a great day for the county as Tom McStay made Eurocross Qualification, and his NUIG college teammate Ennis Track man Donal Devane also made it in – incredibly at least the second Ennis Track man to make the Eurocross on the day! It was a super day for the west coast as Keelan Kilrehill and Thomas Devaney also made the Eurocross u23 team making it a sensational 4 out of the 6 from the West (claiming Clare as it’s north-West of the Shannon!) in the stacked category!