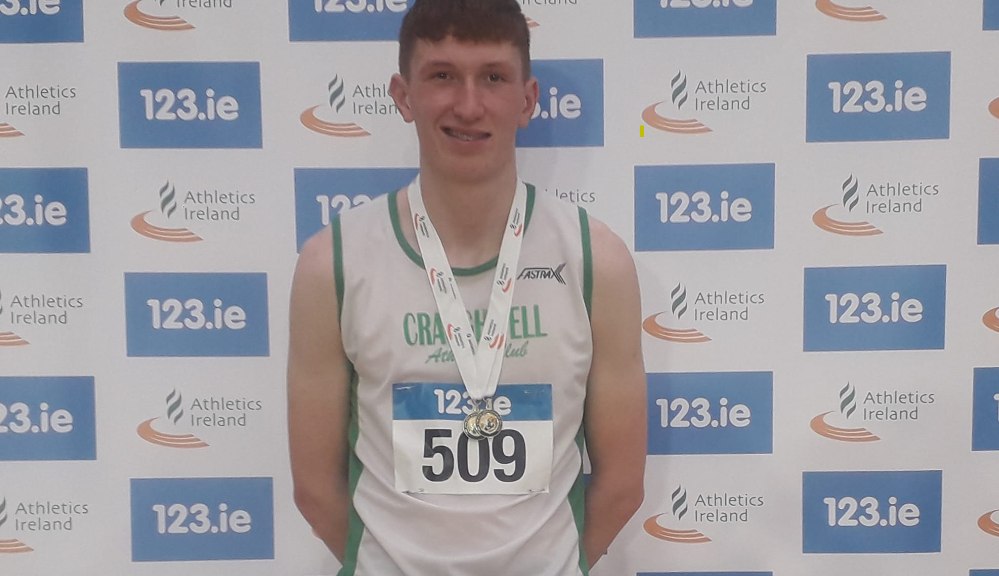 The Indoor Season 2023 kicked off with the Under 20 and under 23 Championships in Abbotstown.  The star of the show was most certainly the amazing Evan Hallinan who won an incredible two Gold Medals in the u20 Category.  As Evan is an U19 this year, he amazingly has another year to compete in this category.

In a thrilling High-Jump competition, Evan equalled his PB of 1.96 to win.  Evan had to fight for it – he knocked the bar at 1.93 twice while his opponent cleared first time.  Clearing it on the third and final attempt, the bar moved up to 1.96.  Both competitors knocked the bar on their first two attempts.  Eval sailed over it on the final attempt to just snatch victory at the end.

The long Jump competition was a dominant display from Evan – on his 5th jump he leaped a massive 6.60m to win the long jump and break the club record yet again. As a mark of his consistency, each of Evan’s four jumps would have won the competition.

Jade Moorhead placed 5th in the u20 competition clearing 1.60m with three great attempts at 1.65m.

The u23 Men’s 1500m featured no less than four Craughwell AC Athletes.  Students Kyle Moorhead, Oisin Davis, Patrick Noonan and Sean Cotter all signed up for the club.  Patrick Noonan won the event last year, but this year’s field was stronger. Due to the size of the field, it was split into a slow and a fast section based on PBs which was tough as, aside from one or two, the PBs of many of the field were similar.

Sean Cotter and Oisin Davis were seeded in the first (slower) heat and knew they would need to run a very fast time if they were to medal.  They worked well between them with Oisin doing a lot of the early work and Sean taking over with 500m to run and sealing victory in a PB of 3.58.35 with Oisin 2nd in an indoor PB of 4.00.00, the thickness of a vest from his first indoor sub-4!.  The fast times gave the lads every chance of a medal.

The second heat had 8 competitors and European Cross Country star Sean McGinley was the hot favourite and the honest Donegal man duly took the race out at a ferocious pace, stretching the field behind him. Kyle Moorhead hung on in third while the patient defending champion Patrick Noonan sat towards the back of the pack.  As the laps ticked by, Patrick moved up smartly on the straights and sat in on the curves.  Kyle briefly moved up to second with 300m left to run but settled rather than pushing on. Kyle got overtaken again and then Patrick Noonan moved up into third.  Teak-tough Patrick closed hard over the last 400m to seal a bronze medal for the popular student in a new club record 3.54.36, with Kyle close behind in 3.56.99, also an Indoor PB.

All in all a fantastic race and when the results of both heats were totted up, the Craughwell boys made up four of the top six which was an amazing result for the group. The four students are firm friends and share the same house – I’m sure plenty of side-bets were in place for who is doing the cooking and cleaning this week!