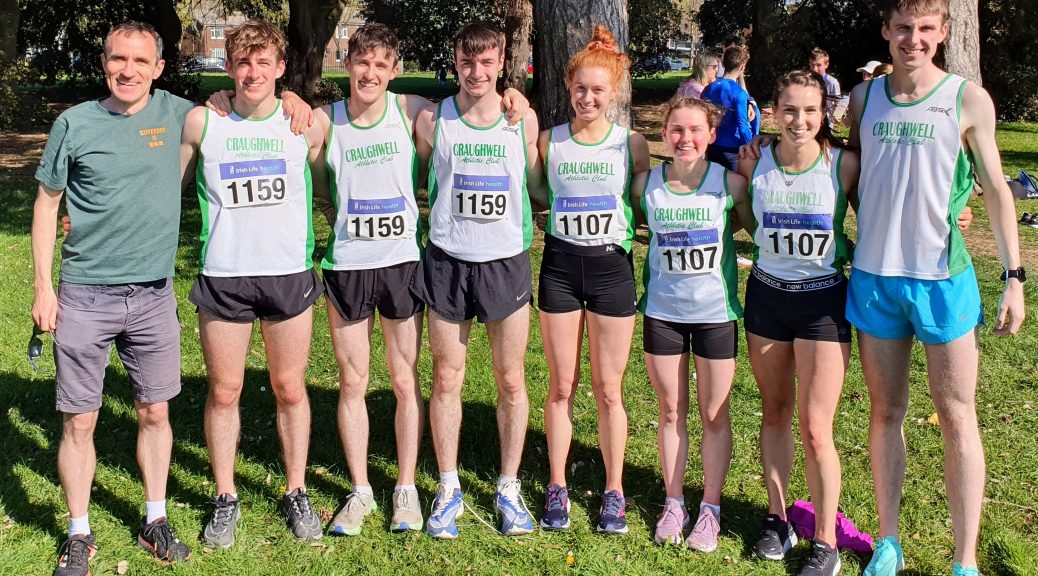 The national Road Relays in Raheny village is a unique spectacle full of tradition and historic rivalries. The relays take place around St. Anne’s Park in a loop slightly over 1 mile and each leg consists of one or more laps. The standard of the event is sky high, and never more so than today which saw a rock-star cast of teams from all the top distance running clubs in Ireland. With the fabulous sunshine the streets were lined with cheering crowds up the long finishing up Wades Avenue.

Craughwell AC made the trip up with a historic TWO Senior teams! A male quartet and for the first time ever, a female team!!

The women’s team event consisted of legs of 1-mile, 2-mile and 1 mile and 25 teams lined up at the start line. Sinéad Gaffney was team captain and decided to take on the first leg of the race herself. She ran an absolute stormer, settling into the top group. She was in 4th at the final bend and drove hard up the long straight to hand over the virtual baton in 2nd place overall, with a time listed as 5:18 (split times in road relays can be famously off, but I’ll quote them anyhow!). Sinéad’s mile was the 4th fastest of the 50 women who raced the mile yesterday and has to go down as the finest performance of the day from a Craughwell perspective!

Caron Ryan took up the mantle then for the two mile leg. Caron had a great run in the IUAA 3000m recently showed excellent strength to hand off to Emma in 9th place, covering the two miles in 12:07. Emma Boyle is more comfortable running cross country than the mile, but jumped at the chance to line up with the ladies. On the final leg of a relay as the runners spread out, pacing is very challenging, but Emma handled it brilliantly and ran strongly all the way to close in 5:58. Emma was passed by just one runner in her leg and just ambushed on the line by another to finish a remarkable 11th overall from the 25 top teams, and first club in Connacht!!

Absolutely thrilled with this – there aren’t many women’s teams in Connacht for some reason and I think this is the first time the club has ever fielded an endurance team at senior level in any competition, and to do so well is just a bonus!

Savage Running from the lads

Due to the standard, the road relays are not for the faint hearted, and this was just the third time that Craughwell AC have contested the event. There were 25 teams (at least as I know Togher were close behind us and don’t seem to be listed yet in the results for some reason). The men’s event covers 8 miles total with legs of 2-miles, 1-mile, 3-miles and 2-miles. Team Captain Jack Miskella picked the running order and took on the mantle of running the first leg. Jack went out hard, but controlled for the first lap and worked his way through the field as the wheels came off those who didn’t pace things so well. He kicked fantastically up the straight to hand over in 9th place in a cracking 9:40 according to the splits.

Kyle was due to run the mile but couldn’t get off work so sub Oisin Davis stepped in to run the mile leg. Oisín enjoys the mile distance and defended his position well to hand over Seán Cotter for the 3-mile leg. Oisín covered the mile in 4:33, the 6th fastest clocking of the day! The three mile leg is often the deciding leg of the race and Sean managed his reserves perfectly to run a remarkable 15:00 dead, largely on his own – again holding 9th place. Sean handed over to national u23 1500m Champion Patrick Noonan who had donned Oisin’s steaming-hot runners. Patrick has been up to his eyes recently with exams and college work so when he took the baton with a large gap in front and behind, he avoided risk and ran “solid” but strong, dialling into 3 minute per km pace and cruising home with 10:03 even.

Ninth place and first Connacht team is a superb result and there is no doubt this was the best Craughwell AC men’s team to have run the event.

How does that compare?