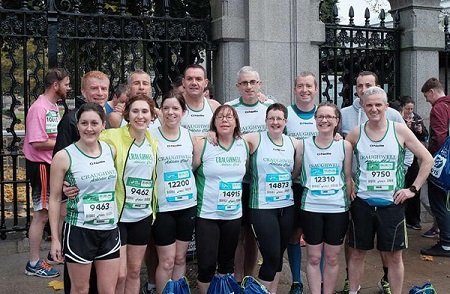 Well its two weeks since the Dublin City Marathon 2015, and as the dust settles and people once again begin to climb the stairs two at a time it’s time to reflect on what was a tremendous days running for the club.

The day its self could have been better. With the majority of training done in what can only be described as perfect running conditions the wind and rain on the day favoured some but not all. 14 members took to the start line with three of these competing in their Marathon debut.

Tom Prendergast was first home, completing his debut marathon in a swift 03:01, Tom Touhy was next across the line in 03:19 finishing comfortably under 3.20. Frank Byrnes stormed home to cross the line in 03.40, followed by Stephen Carty in a time of 03:46 netting him an impressive 14 minute PB. Brian Gorman continued his good form with another sub 4 performance of 03:57, his third marathon this year. Hot on Brians heels came Deirdre Devane completing her first attempt at the marathon, storming home in a brilliant time of 03:57. Well Done Deirdre!

Rena Deely was third Craughwell woman to hit Merrion Square completing her 5th Dublin City Marathon in 04:14, making this her 14th marathon in total. Having run every step both in training and on the day together Fiona Diviney and Emer Molloy crossed the line in 04:23, resulting in PBs for both girls. Aine Mc Guinness, who smiled throughout the whole course finished strong in 05:12. Completing the field for the club was Edel Kavanagh, who also took on the marathon for the first time and finished smiling in 05:40. Having been out injured earlier in the year it was great to see Edel looking so comfortable on the day. A native Dub, this was home ground for her and she looked like she enjoyed every second of it.

There were some great performances from our neighbouring clubs in Galway on the day. Special mention to Athenry Acs Jane Ann Meehan who took Silver in the Senior Ladies, Martin Keane who took bronze in his category and Galway City Harriers Martin Kearney who took Gold in his category. Well done folks. Great running!