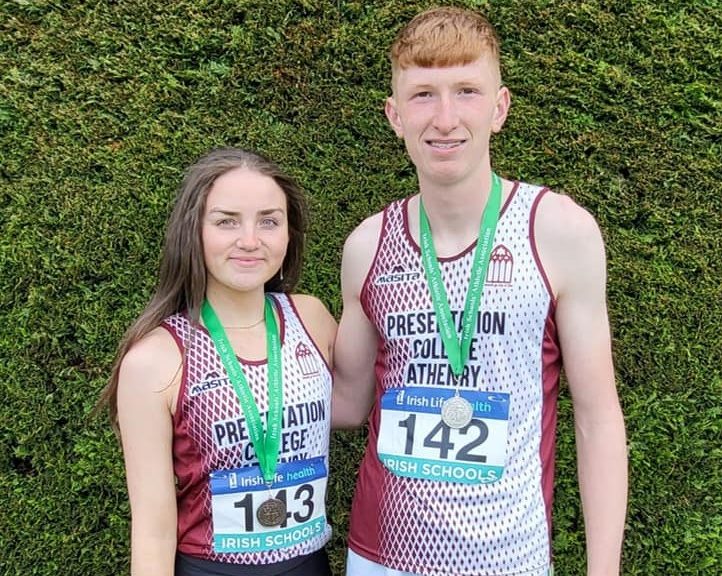 There were many fantastic performances from Craughwell AC athletes at the Schools All-Ireland finals in Tullamore today.

Evan Hallinan was again the star of the show with no less than TWO medals for the Presentation College Athenry. He won the high Jump with a massive leap of 1.95 in difficult windy conditions. And winner of the Brendan O’Reilly Cup for his efforts. Fantastic performances with another 2 years left for Evan in this age group! Evan was second in the Triple Jump with a leap of 12.95m.

Evan was joined in High Jump medals by Jade Moorhead who won a fantastic Bronze in the High Jump with a fine leap of 1.60m. She was very unlucky not to have cleared 1.63 as she just grazed it by the slimmest of margins.

There was a marvelous Silver for Declan O’Connell in the Junior Boys Schools All-Ireland 1500m and 5th-place finish for Oisín Davis in stacked races. Declan led from the gun and fended off one attack after the other until he was just caught on the final bend. He ended with Silver and an absolutely brilliant new PB of 4:19 for his trouble! Outstanding bravery! Declan’s exciting front-running style is starting to earn him a reputation even with the AAI commentators!

Oisín went with the leaders in the Senior 1500m even though he knew it would be tough as they were all 3:52 men (10s faster than Oisín’s current pb). In a surging race he got separated from the leading group of 3 by about 2 metres and never quite made it back into touch, always just a few paces off the top-3. As he realised with 100m to go that he wasn’t going to catch them, he eased up on the home straight and got caught the Munster champion at the death – finishing in 5th with 4:06 finish. No medal or PB but he gave it 100%.

Lauren Kilduff of Gort CS won Bronze in the Long Jump with a stunning 5.0m leap and was 7th in the 200m with 27.24. Lauren’s long jump was a massive personal best for her – great to do a pb on the big day!

In the minor Boys 800m, Stephen Ruane ran 2:16 for 9th place in a very packed race. Earlier in the Junior Boys 800m, Keelan Moorhead ran a great PB of 2.14 for 10th. Breaking 2:15 is a landmark run and I remember well the day his big bother Kyle did it. Onwards and upwards for the popular athlete!

Darragh Kelly cleared all jumps at first attempt up to and including 1.65m which put him in a great position. He almost cleared 1.70m esp 3rd attempt when bar fell down after he had cleared it – so nearly claiming 3rd place. In the Intermediate Girls High Jump, Eva Kelleher (Galway ETSS) cleared 1.45 for 8th while Leonore Church PCA cleared 1.40 for 10th. Siofra Davis competed in the Senior Girl’s High Jump for the Pre Athenry but it wasn’t her day today.

The minor boys team from Calasanctius Oranmore all consisted of Craughwell AC Athletes and finished in 9th place in a fine 52:26. The team consisted of Conor Penny, Stephen Ruane, Tomasi and Caleb.