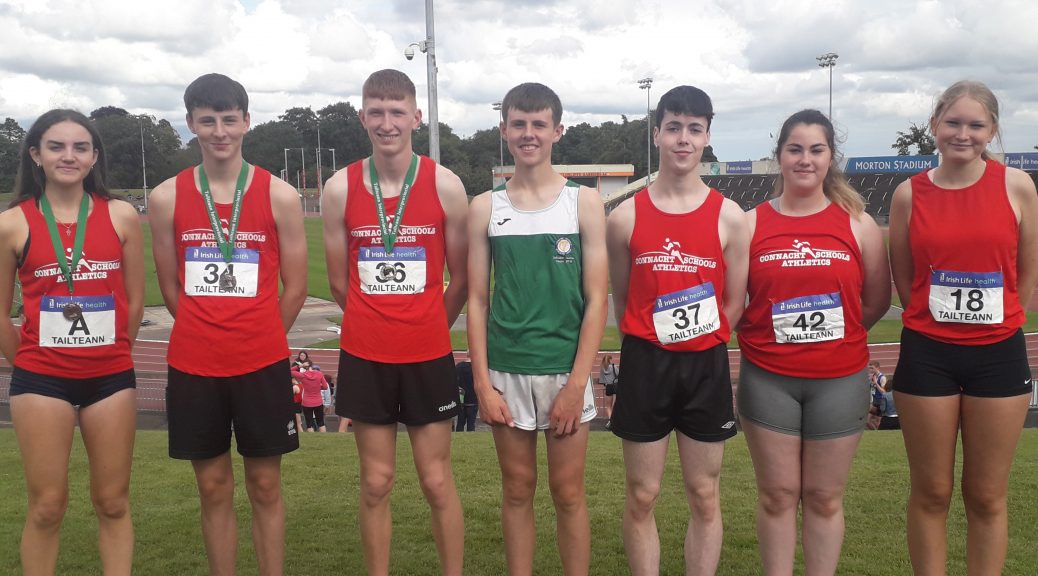 A large contingent from the club represented Connacht today in the Taillteann Games – with 9 from the club in action, it was possibly the largest ever representation from the club in this event which features the cream of Irish schools athletics and is used to pick the Irish team for the upcoming international against England, Scotland and Wales.

Evan Hallinan was the star of the show today with a fantastic series of jumps to claim victory in the triple jump, with all of his jumps smashing his recent PB of 12.46 which he set in August when winning the National U17 title. Today in Santry, Evan leaped 12.73 on his first jump before going on to record 12.58, 12.88, 12.88 and 12.84 – a super series of jumps and just 10cm shy of the club junior record set by Matthew McKernan in 2016. Evan becomes the 25th athlete from the club to be selected for an Irish international – a super achievement and a great honour for Evan and for the club. Less than an hour earlier, Evan placed 7th in the long jump with a best of 5.94 – struggling with his mark in windy conditions and a little down from his incredible 6.42m PB set in August – so it was very impressive to bounce back quickly in the triple jump.

Also in the medals, Lukas Schukat took bronze in the high jump with a best of 1.80 but was a bit disappointed as he was leaping much higher in training and found the mat position in Santry a bit off-putting as it was at a funny angle to the track. But winning bronze is still quite an achievement and Lukas has an outside chance of being selected for the international match.

Jade Moorhead had the consolation prize of winning bronze with the Connacht 4x300m relay team but was gutted earlier in the day not to progress beyond 1.55 and 4th place in the high jump. Jade was desperately unlucky at the 1.60m height to barely brush the bar with her heels each time. In fact on her final attempt, so slight was the contact with the bar that it was unnoticeable and Jade had fully landed when the bar decided it was going to drop also. Nevertheless Jade has had a super summer season with 3 PBs of 1.58, 1.61 and 1.64 and there is a lot more to come from this super talented athlete.

Also in the high jump Leonore Church was very unlucky to exit at 1.45m, placing 10th overall. In the triple jump, Erin Kelly also placed 10th with a best of 8.94 – a little down from her fantastic PB of 9.70 during the summer months. The aforementioned boys triple jump had some fantastic representation from the club with Lukas Schukat placed 7th with a PB of 11.28, Evan Quinn 9th with a PB of 10.94 and Andrew Power (representing Leinster) 10th with a leap of 10.12.

Aoibhe Fahy was in action in the throws, firing the javelin out an impressive 25.91m into a strong wind to take 9th place and heaved the 3kg shot putt out to a new PB and fine distance of 8.88m to place 10th. Holly O’Boyle was the last athlete from the club in action with a solid 13:13.31 to take 9th place in the 3000m.

With 9 athletes in action today, I’m pretty sure it was the largest representation ever from the club at this level – great progress for the club. Well done to everyone and in particular our 3 medallists.

The full list of all of our juvenile and college athletes selected for internationals is as follows:-