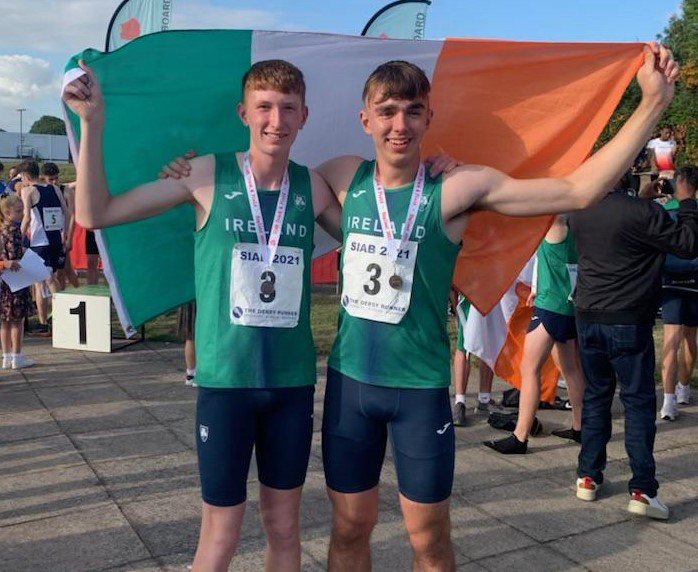 Round up of an historic weekend which includes an international medal by Evan Hallinan and Jack Miskella Captaining NUIG to Cross-Country glory after 42 years.

Evan Hallinan won a fantastic Bronze medal for Ireland in the Irish Schools International in Derbyshire.  Evan, representing the Presentation College Athenry, leaped an exceptional 12.80m at the second attempt in the Triple Jump to finish with a precious Bronze medal.

This is another milestone on a truly remarkable comeback year for the popular Evan after a bad ankle injury sidelined him for much of 2020. To come back so strong after such a bad setback is a fantastic sign of his character and tenacity.

Incredibly – another Presentation College Student, Liam Shaw of Athenry AC won Bronze in the shot putt to make it an historic day in the sporting history of the school.

Caron, Sinead and Captain Jack are students of pain!

In the sportsgrounds of DCU on Sunday, Ireland’s top university athletes duelled over a forgiving, if a little long, cross country course.  NUIG men scored a dominant win in the men’s 8km race and Jack Miskella of Craughwell AC played a vital role as team Captain and ran a fine race to also finish in the top 30. This is the first time in 42 years since the Trophy made it to Galway. The first time this was ever won by NUIG (then UCG), Craughwell’s own John S. O’Connor featured strongly on the team and finished 12th overall – results of that one are here.

The women’s competition was won by Trinity College Dublin with the aid of Caron Ryan of Craughwell AC who finished 14th overall.