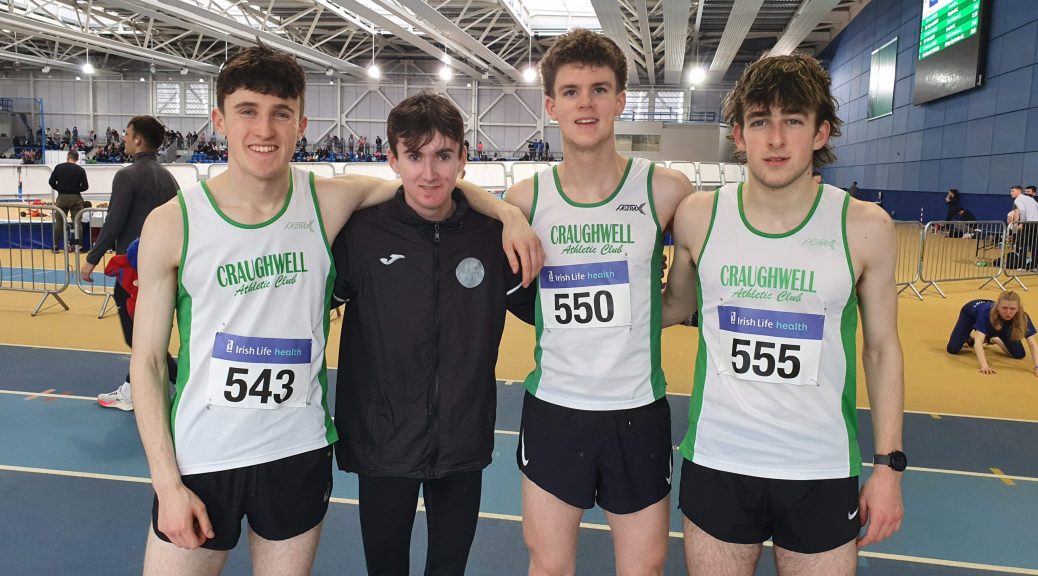 The top Senior Athletes in Ireland congregated to the National Indoor Arena in Abbotstown on Saturday and Sunday to compete in the National Championships.  Craughwell AC had a record number of competitors with no less than EIGHT from the village making the trip to the big smoke to test their mettle against the best of the best!

Connacht Jumper of the year Evan Hallinan made his debut in the National Senior Championships with an incredible performance in the Senior Men’s High Jump to leap to the Bronze medal with a first-time clearance and new PB of 1.95m. Evan held his cool against several more experienced jumpers to claim the coveted medal and become the 5th athlete from the club to win a National Senior Indoor medal, joining both Cathriona Farrell and Jerry Keary in the high jump. Maeve Curley in race walking and Laura Cunningham in the pentathlon.

William Fitzgerald was our competitor in the 3000m and the Peterswell man had a superb run to finish in 14th out of the 34 competitors, just 2 seconds shy of his personal best.  William wasn’t feeling 100% in training for the last week, having to drop out of a couple of sessions so it was a bit of a gamble entering this event. Watch the race below.

The arena was hot and dry and not very conducive of distance running pbs. William knuckled down well and hung onto the coat-tails of the pack in one of the fastest ever National 3000m fields and we were delighted with his run to finish within 2s of a pb. As the last lap came, the exceptional Darragh McElhinney just caught William on the line. To say that you managed to cover 2800m in the same time it took the mightly McElhinney to run 3000 is no shame at all and the finish photo with the already-legendary Griggs in the background will look good over time!!

Craughwell AC has a large group of competitive young milers at the moment and 5 of them contested the 1500m heats with a record two making the finals on Sunday.

Patrick Noonan had one of the runs of the day on Saturday, qualifying for the final with a near-pb of 4.03.65.  Patrick bettered that in the final, running an outstanding 2-second personal best with 4.01.11.

Sinéad Gaffney matched Patrick’s achievements by running a stunning Club Record of 4.40.75 in her heat to qualify for the final. Sinead ran the perfect race, hugging the rail and staying out of trouble all the way

to finish with her fast time and new CLUB RECORD!!! Watch Sinéad’s race unfold below:

In the final, Sinéad ran an excellent 4.42.45 which would have been a club record but for her achievements the previous day!

In heat 2 of the 1500m, Kyle Moorhead led for much of his heat but was just edged from the qualifying spots in the push for home with 4.07.  Jack Miskella and Oisin Davis suffered a similar fate in heat 3, performing strongly but just missing the top-3 qualifying slots with 4.06 (4th) and 4.07 (6th) respectively.

In the 400m, Sinéad Treacy came 2nd in her heat in 57.58, but just missed out on qualification for the finals.