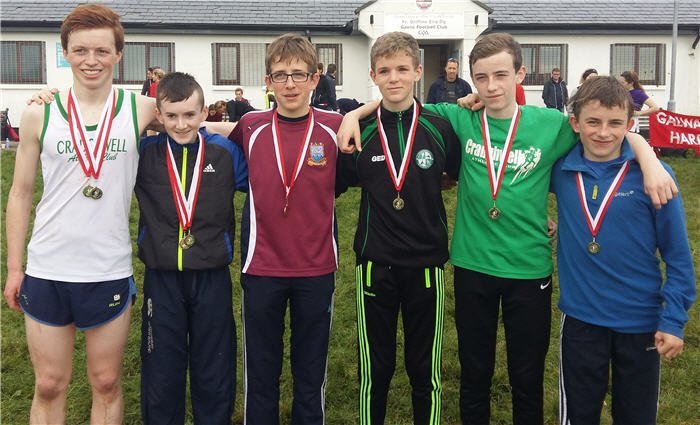 The first day of the Connacht Cross Country Championships went off in perfect weather conditions in The Claddagh in Galway city. There were some tremendous performances by athletes from the club with Jamie Fallon and Sean Cotter both racing to convincing individual victories in their races – Jamie taking the Connacht Junior title by a considerable margin and Sean putting in a strong finish to take the U14 title by 20 or so metres. The U12 and U16 boys also raced to the Connacht titles with very strong team performances while U14 boys and U12 girls took team silver.

The first race of the day was the U12 Girls 2000m where Clodagh O’Meara put in a terrific performance to place 8th – one of Clodagh’s finest performances to date. She was followed swiftly by Aoibhe Carr with a great race to place 9th having just returned from injury. Next in one of the most improved athletes in the club was Fauve Aylmer in 17th place – an incredible 36 places improvement since the same race last year. Jade Moorhead completed the team scoring in 19th place and was followed by 40 Isabella Boland, 44 Abbie Rooney, 55 Erin Doyle and 57 Holly O’Boyle who showed great commitment to make the start line having had to take a taxi into town in an emergency. The girls performance was strong enough to yield a super set of silver medals with a team score of 53 points. And hard luck to one of our most dedicated athletes in training Grace Leen who had to pull out of the race with breathing difficulities – there will be plenty more good races ahead for Grace. 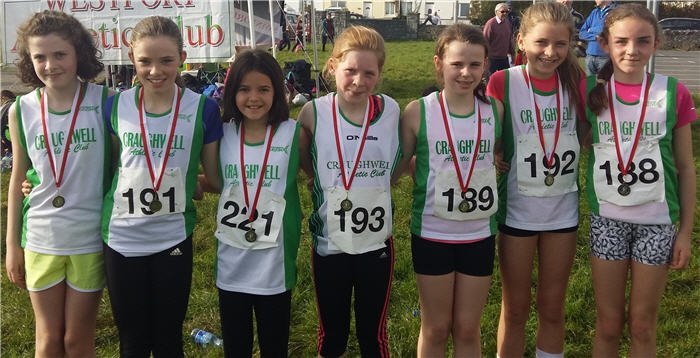 The U12 Boys were next into battle with a very strong team who raced to the Connacht title in style with a low score of 42 points. The team were led home by another superb run from Cian Lavan in 6th place followed by 8 Mathys Bocquet, 13 Evan Hallinan, 15 Daniel Galvin, 17 Luke Flynn, 20 Evan Moran, 39 Cormac McFadden, 45 Alan Connaughton and 55 Michael Woods. This is the first time since 2004 that Craughwell has taken the Connacht title in this age group – a fantastic result from an exceptional group of athletes.

Next the U14 Girls battled hard to a 5th place finish in their 3000m led home by Saoirse Moore in 21st, following by 27 Emma Jane Moran, 29 Asia Clarke and 31 Ciara Hughes. In the U14 boys 3000m, Sean Cotter put in one of the performances of the day when taking the Connacht title in style – racing into an early lead and pushing the pace the whole way to the line. Liam Leen put in a brilliant performance in his wake, despite being noticeably impeded earlier in the race – placing 5th overall. Liam was followed in by 13 Ross McGuinness, 20 Oisin Davis and 29 Paschal Walsh – a performance that earned a well-deserved set of silver medals for the team with a score of 39 points. Catherine Noonan was the club’s sole representative in the U16 Girls 4000m where she had yet another fine run to place 11th overall. 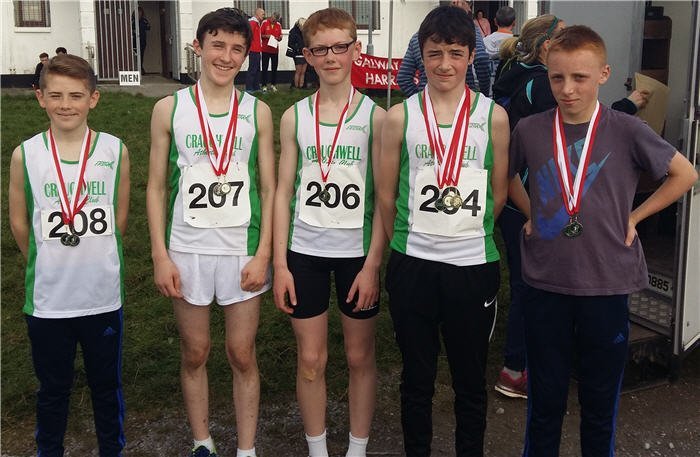 Next one of the highlights of the day – the U16 Boys 4000m which turned out to be an intensely close battle for the medals with just 3 points separating the top 3 teams. Craughwell captured the Connacht title with 54 points with Westport just behind on 55 and GCH on 57. The Craughwell team were led home by Ben Ryan in 4th place followed closely by William Fitzgerald in 7th, Patrick Noonan 20th, Finbarr McFadden 23rd, Sean Noonan 24th and Kyle Moorhead 25th. In the Junior Men’s 6000m, Jamie Fallon put in one of the performances of the day when winning the Connacht title in style by a considerable margin. Jamie was followed in by Odhran Keane in 2nd place. Ollie Mullins was the final competitor from the club in action in the senior race. Ollie had a fine run to place 5th overall and 3rd man home in the senior category.

Results of the juvenile and junior races are here – huge well done to Iain Shaw for getting them out within minutes of the final race!