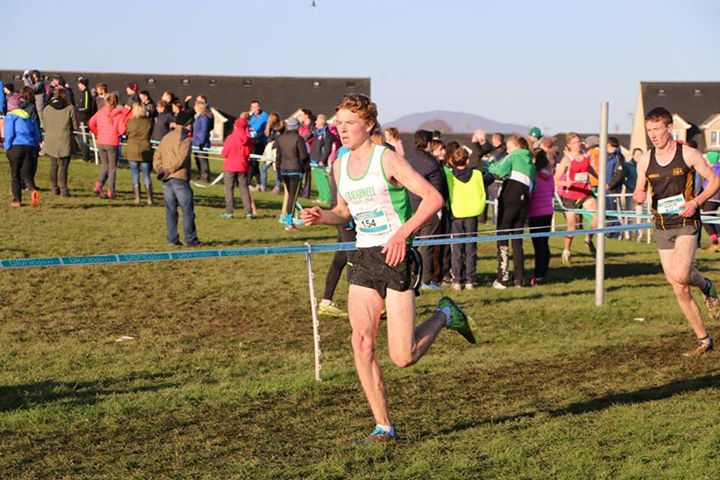 Jamie Fallon is edging closer and closer to the top 3 in National cross country. In 2012 Jamie placed 6th in the U16 boys. He went 1 better in 2013 when stepping up to the U18 boys where he placed 5th. And today in Dundalk, Jamie took another place off that with a fine 4th place finish in the U18 boys 6000m.

Neil Greaney had a fine run also in the Junior Men’s 6000m where he had his best finish yet in a National cross country with a 13th place finish – just shy of the top 12 medalling winning athletes. Neil had a storming last lap where he passed 25 athletes and it all augurs well for the future. Also in strong form, Damian O’Boyle placed 31st in the U18 race while Paul Joyce took 37th place in the Junior Men’s race. Fantastic for the club to have 4 athletes of this calibre competing at the highest junior levels in Ireland!

Neil Greaney battling it out in the Junior Men’s 6000m

Athletics Ireland have temporarily put the juvenile results on dropbox so I have pulled them here in case you cannot access them there:-

Meanwhile in the final race of the day both Rob Hogan and Ollie Mullins put in stellar performances as part of the County Galway team in the senior inter-county race. Rob placed 76th in a time of 35:36 while Ollie was not far behind in 89th place in 36:45 – both running seriously good times.  Hard enough running such times on the road never mind having to do it on laps of a muddy field!