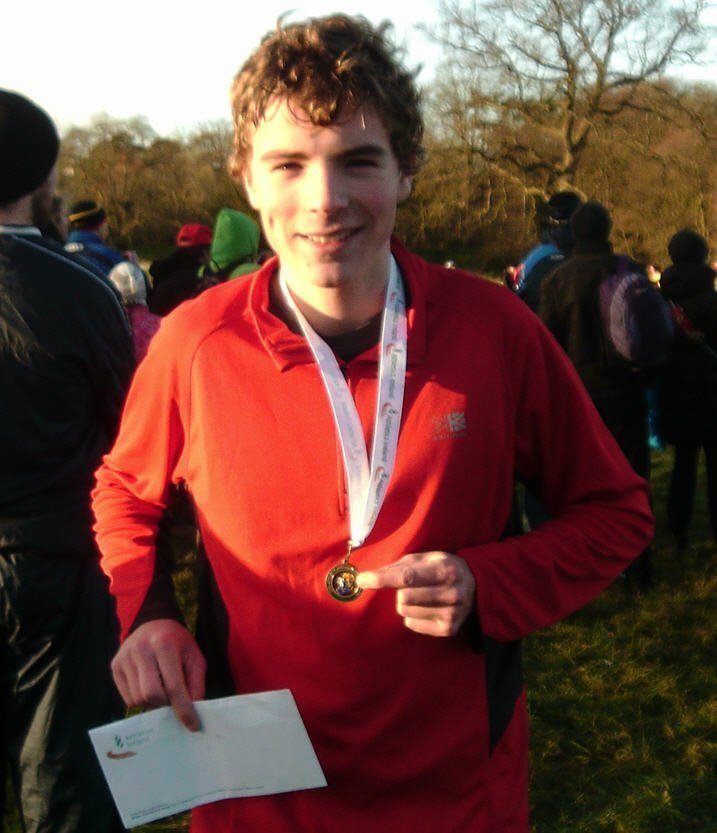 Jamie Fallon, Bronze Medallist in the National U19 Cross Country in Santry

Jamie Fallon had a huge run in Sunday’s U19 6000m cross country where he led the race for much of the first 3k in a tight battle with 3 other athletes and eventually held on to a magnificent 3rd place to seal his first individual podium finish in National cross-country.

Jamie’s achievement comes on the back of extraordinary dedication from a young age. As an U10 in 2006, Jamie stepped up to the U11s where he placed 35th in the Connachts. Our younger readers should take note of that statistic, 35th as an U10 stepping up to U11 in the Connachts would translate to 120-something in the Nationals – and 8 years later Jamie claims National bronze against many of the same athletes!

In recent years, Jamie edged his way to the podium, placing

Jamie is a nephew of the legendary Galway runner Jimmy Fallon who represented Ireland in cross country on numerous occasions and was a scholarship student in Providence College in the US. Jamie’s performance had earned him his third international vest for the Celtic Games which will be held in Ireland next January.

In the same U19 race, Damien O’Boyle had a strong run to take 24th place while Conor Gillen continued his comeback from injury to take 52nd place. Unfortunately we only had the 3 lads in action – a 4th scorer in 66th place or better would have earned team bronze. In the U19 girls 4000m, Ciara Greene had an exceptional run out-of-age to take 28th place.

Earlier in the day, Adam Stewart was the star of the show with a 13th place finish in the U11 boys 1500m. It was a remarkable run from Adam off a relatively small amount of cross country training, definitely a bright future in store for him if he can fit it into his busy sports schedule. Adam was followed home by Eoin Byrne 102 Luke Flynn 108, Conor Hoade 118, Darragh McCartin 122 and Evan Hallinan 172. It was a tough race but good experience for the team as it was their first taste of National cross country. The team placed 12th with 341 points.

The U11 girls placed 10th with 266 points in another tough battle. The team were led hom by a strong run from Caoimhe Connolly in 49th place, followed by Emily Miskella in 59th, Rebekah Flynn hot on her heels in 62nd, Aoibhe Carr in 96th, Jade Moorhead in 124th and Saoirse Moore in 144th. Saoirse had the misfortune of developing a pain in her side before the race started which lasted right through the race and destroyed the race for her on the day after such a fine series of performances in the Galway and Connacht championships. But there will be plenty of other days in the years ahead for this super athlete. Particularly well done to the U10 boys and girls who stepped up an age into the U11 teams. Its a tough race when you are the right age and even tougher when most of the field is a year older. Both teams did themselves proud and a small improvement in individual placings would take them very close to the leading teams.

The U13 girls had another big battle at such a high level of running and they did great to finish out the gruelling 2500m distance. The team were led home by Ailbhe Miskella in 86th place with Sarah Woods 134th, Mia Waters 145th and Aoife Kelly 155th. Penny Wells battled bravely but had to withdraw midway through the race.

In the U13 boys race, the club had mixed fortunes with a superb team in action. Sean Connaughton had a tremendous run to take 22nd place overall. Kyle Moorhead was also well placed in the early stages just behind Sean but suffered a heavy fall and was unable to continue. It was unfortunate for Kyle who has had a great year with numerous Galway titles to his name but he will bounce back stronger and this team has the nucleus of a superb team and team success will almost certainly come their way in the future. Gavin Lee was next home in 54th place followed closely by Liam Leen 68th, Sean Cotter 69th, Sean Cannon 94th and Finbar McFadden 127th. The team placed 7th with 239 points.

In the U15 boys 3500m, misfortune hit us again when Oisin Lyons had to withdraw in the early stages of the race. Oisin had been ill with a chest infection the night before and bravely took to the line but due to severe breathing difficulties, had to withdraw after 800m. Conor Lee led the team home with a fine performance in 50th place, followed by super runs from William Fitzgerald in 64th, Patrick Noonan 88th and Gavin Forde 122nd. Luke Finn was also in difficulty with breathing and had to withdraw in the latter stages of the race. The team placed 11th with 324 points, but nonetheless with some very encouraging performances for the future.

The U17 girls had a strong run in their 4000m with Caron Ryan in excellent form to take 30th place followed by Dearbhaile Walshe in 56th, Grainne McDaid in 72nd and Ciara O’Boyle in 88th. The team placed 8th with 246 points and placed 4th in the county competition. This was the first time that the club has contested the team event in the U17 girls and in fact the girls are now the oldest girls team to have represented the club in National juvenile cross-country – great progress for the girls and the club.

So overall it was a mixed day for the club – some superb performances and some mishaps to athletes that messed up their day. But there’s always ups and downs and its fantastic that our athletes are able to go out and participate at this level of running. The highlights of the season were the tremendous silver medals for the U12 boys team and the superb individual bronze for Jamie Fallon – our highest individual placing ever. That wraps up the club cross country action for the year so its onwards now to the indoors for most and of course also the secondary schools cross country for some.