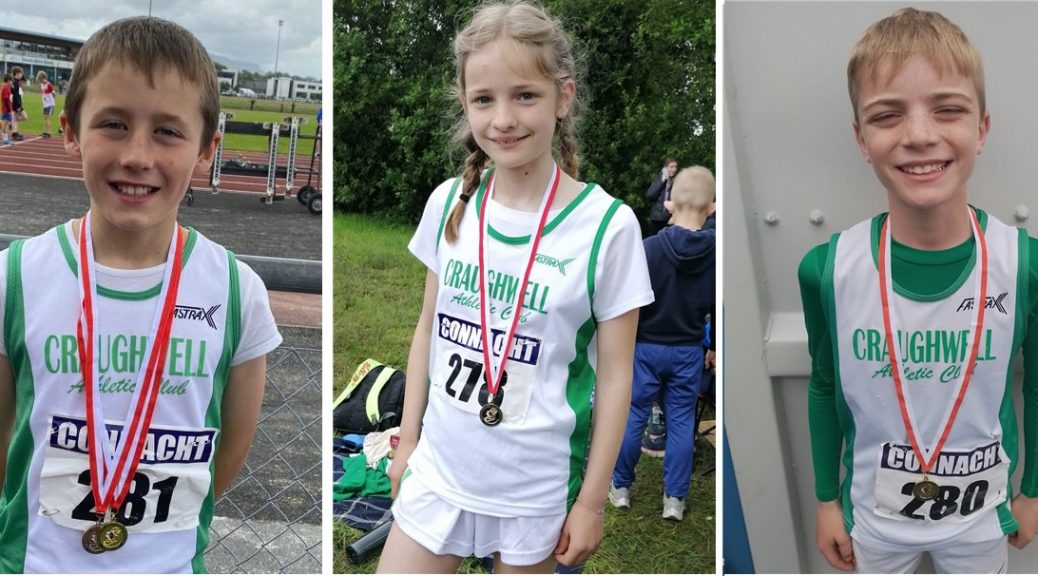 Craughwell AC had another exceptional day out at the Connacht Championships in Sligo IT where the U9s to U13s age groups were in action for day 1 of the Connacht Outdoor Track & Field.

The day kicked off with the U11 long jumps where the pairing Cerys Johnston and Ava Burke leaped to the silver medals with fine jumps of 3.11m and 2.85m. Cerys followed this up later when running the first leg of the 4x100m to help the U11 Girls to a nail-biting victory in the relay with Cerys passing off to Laoise Colleran to Reailtin Ward to Ruby Maher for victory by a slender margin in a time of 1:03.63.

And the most dedicated athletics family award of the weekend has to go to the Burkes with Ava having jumped to long jump silver in the U11s and her brother Aaron partnering with Gerard Murray to take the silver medals in the U10 Boys Turbo Javelin with Gerard 2nd with 15.10 and Aaron 4th with 14.66. But what was little known to everyone was that Ava and Aaron were on holidays abroad last week, due back last night but their flight was delayed and they arrived home at 6am this morning, 1 hours sleep and then off to Sligo IT for the athletics! Well done Ava and Aaron and mum and dad!!

In the sprints, the U9 Boys pairing of Cathal Niland and Oran Gillespie were first into action and had a fantastic run to take the bronze medal in the paired event with Cathal running 10.49 and Oran 10.65 despite a slip at the start. They were swiftly followed by Conor Mannion and Jack Hibbitt in the U10 Boys 60m where they had a super race with Conor winning his heat in 10.06 and Jack 3rd in his in 10.12 – with the combined result placing them narrowly outside the podium placings in 4th place. The 2 boys later ran brilliant 500m races to take the Connacht title with Conor recording 1:35.41 to place 2nd in heat 1 and Jack recording 1:36.08 to place 3rd in heat 2. Oran Gillespie later jumped a phenomenal 3.24m to record the leading jump in the U10 Boys Long Jump with Eoghan Browne leaping 2.23m.

Our Connacht Champion u11 girls relay were next in action in their sprints with Cerys and Reailtin pairing together and Ruby and Laoise. Ruby raced to victory in her heat in an exceptional 9.64 with Laoise 2nd in her heat in an equally exceptional 9.75 – combined they were unbeatable and took their 2nd Connacht title of the day. Cerys and Reailtin had fine runs also with both girls 3rd in their heats – Cerys racing to an impressive 10.06 and Reailtin 10.32 – brilliant performances by a super quartet of sprinters.

Sean Colleran made it a great day for the Colleran family with a brilliant silver medal performance in the U12 Boys 60m hurdles in a time of 11.53 and followed it up with a first-time clearance of 1.25m to take silver in the U12 Boys High Jump.

Next up the U12 80m sprints where Lincoln King had a fantastic run in the U12 Boys 80m sprint to take the silver medal in a fine time of 8.89, with Sean Colleran only just outside the medals when winning his heat in 9.03. And in the U12 Girls 80m, Kate O’Leary had a brilliant run to win her heat in a time of 9.22 and in the process, take the bronze medal just 0.05s away from gold. Kate had to rush to the sprint from her high jump after an exceptional performance there where she took the gold with a brilliant clearance of 1.30 and very almost cleared 1.33. Kate’s making remarkable progress in high jump with the help of coach Evan Hallinan – with first time clearances today of everything as far as 1.30 and getting that on her 2nd attempt.  She was competing in spikes for the first time and they certainly made a difference!

Abigail Machaj and Muireann Kelly had super efforts in the U10 turbo to take the silver medal in the paired competition with Abigail throwing 2nd furthest out of all the U10 girls with a mighty throw of 12.27m and Muireann with 9.57m. Harry Byrne and Cathal Niland repeated that achievement with a fine set of throws in the U9 Boys turbo javelin to take silver – with Harry throwing the javelin 11.98m to place 2nd individually and Cathal not far behind with a best of 7.87m.