45 athletes from the club made the trip back to Sligo IT yesterday for day 2 of the Connacht Track & Field Championships with some fantastic success for the club on a warm humid day in Sligo. The day kicked off with the U18 Girls 4x100m relay where the club had 2 teams in action – first time ever that the club had 2 teams in action in this grade. The teams were evenly balanced and put in fantastic runs to take first and second place in times of 54.13 and 54.94 with the team of Aoife Walsh, Arlene Earls, Shauna Tobin and Laura Cunningham taking the silver medals and the team of Caoilin Milton, Ciana Reidy, Lorraine Delaney and Siona Lawless taking the gold medals.

It was a busy early start to the day for the U18s some of whom were competing in triple jump and pole vault at the same time as the relay. Laura Cunningham put in a good series of jumps into the wind in the triple jump with a best of 10.42m to take the Connacht title with Aoife Walsh in second place with a best of 9.00m. Aoife also tackled the pole vault for the first time putting in a remarkable series of jumps to clear a best of 2.05m. It was a brilliant day also for Ciana Reidy in the pole vault adding significantly to her PB with a best of 2.65m to win the Connacht title. 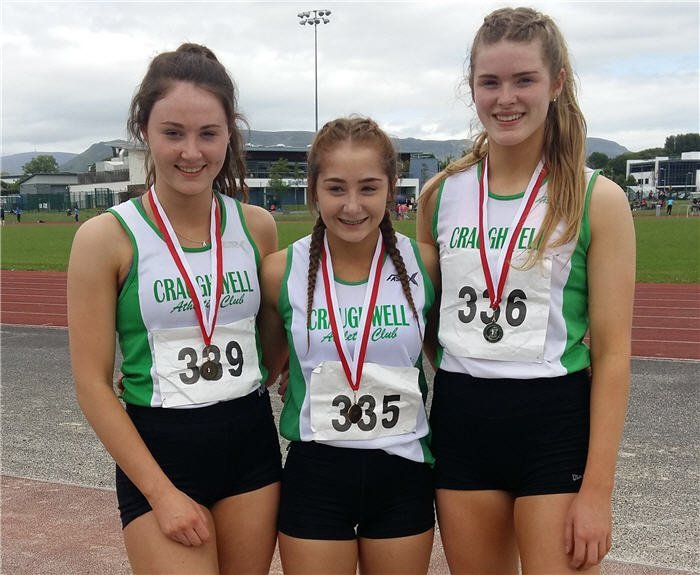 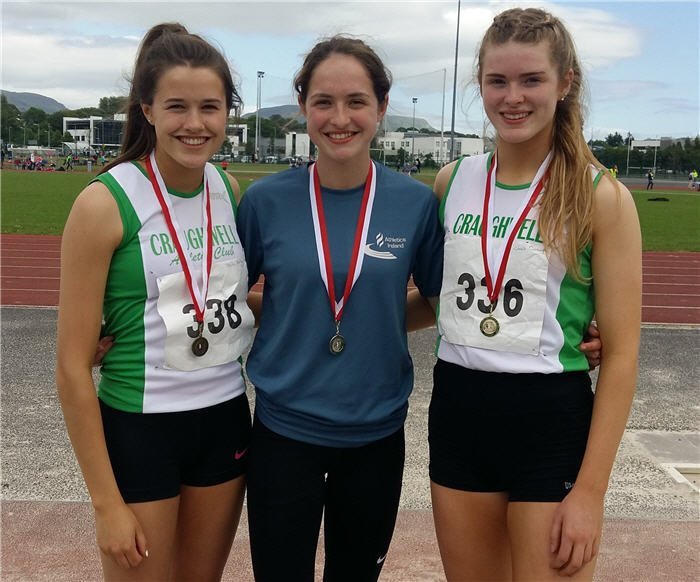 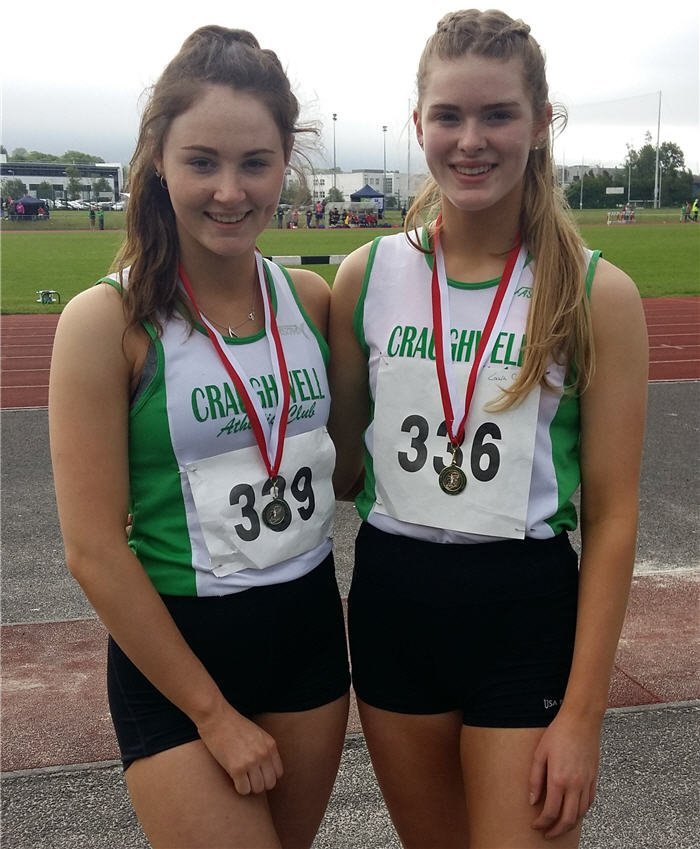 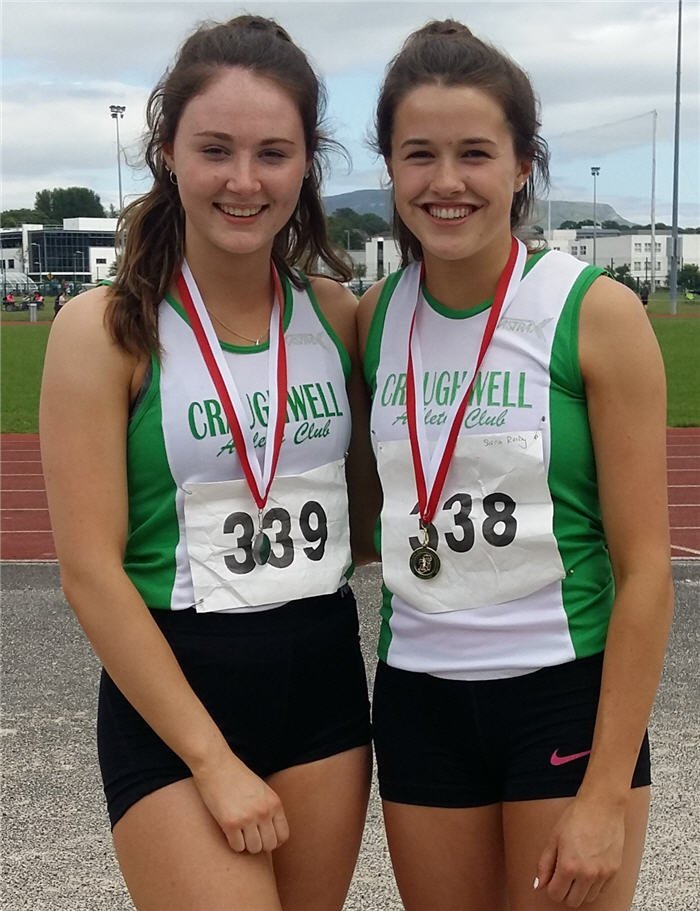 Laura added a second Connacht title on the day with a splendid victory in the high jump in a new PB of 1.60m and going very close to clearing 1.62m. The success continued for Laura with a silver medal in the long jump with a best of 4.54m and almost took another medal in the 100m sprint when placing 4th in a time of 13.73, only 0.08s from the podium. Arlene Earls took the Connacht title when leaping to victory in the long jump with a jump of 4.68m with Aoife Walsh taking the bronze medal with 4.36m. Ciana Reidy was narrowly 4th with 4.30 while Neasa Schukat was 5th with 3.46m and Shauna Tobin unlucky to break all 3 jumps. It was nice to see six U18 long jumpers all from our club in the same event – very few clubs in the country can boast such a fine squad of athletes at that age. And we would have had eight jumpers in the event were it not for an ankle injury to Caoilin Milton and a quad injury to Lorraine Delaney recently, in spite of which both girls ran on the gold-medalling 4x100m relay team and Lorraine jumped brilliantly to take the silver medal in the U18 high jump with a 1.50m leap, an event where Ciana Reidy also leaped 1.50m but had to settle for bronze on countback of knocked bars. Arlene Earls followed up her brilliant long jump title with a silver medal in the U18 800m in a time of 2.34.42. In the Senior grade, Sinead Treacy took a sprint double with Connacht titles in the 100m (13.24) and 200m (26.55s), going from strength to strength in each competition. 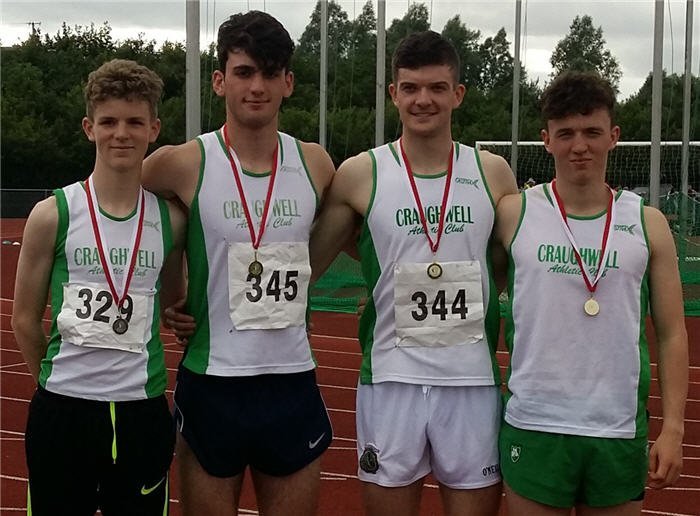 Gavin Cooney took the Connacht title in the Men’s 800m with a big PB in a time of 2.03.53, knocking several seconds off his previous PB with a big kick over the last 100 metres of the race to edge the victory. Ben Garrard had a similar storming performance to edge to victory in the U19 800m in 2.01.43. It was a fine day for Ben with victory in the U19 Long Jump also with 5.88 and in the 400m in 53.29 seconds. Oisin Lyons ran an impressive gun to tape victory in the U18 800m coming very close to a PB when taking the Connacht title in a time of 2.03.22 while Kyle Moorhead added to the string of 800m successes with an electric finish to take the silver medal in the U16 boys 800m race in a new PB time of 2.11.21. Back to the U18 grade, Jerry Keary took the high jump Connacht title with a leap of 1.85m, slightly down on his brilliant best but shortly beforehand he had leaped to a huge PB of 6.26m to take victory in the U18 boys long jump (only 6cm short of setting a new club junior record) and for good measure added bronze in the U18 100m into a stiff breeze in an excellent time of 11.97. 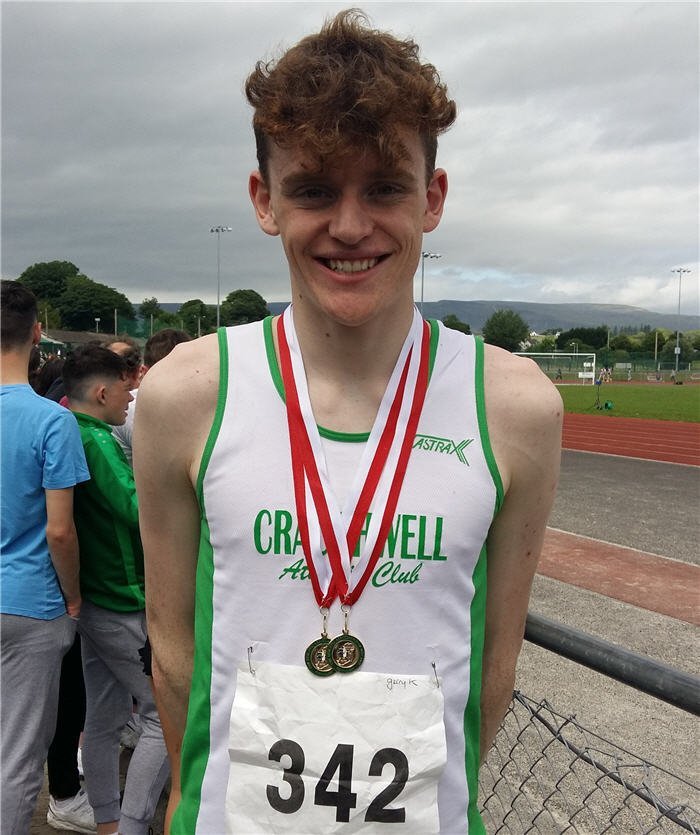 Ben Garrard and Jerry Keary, Connacht Champions in the U19 and U18 Boys Long Jump
with Jerry victorious in the high jump also and Ben in 400m and 800m 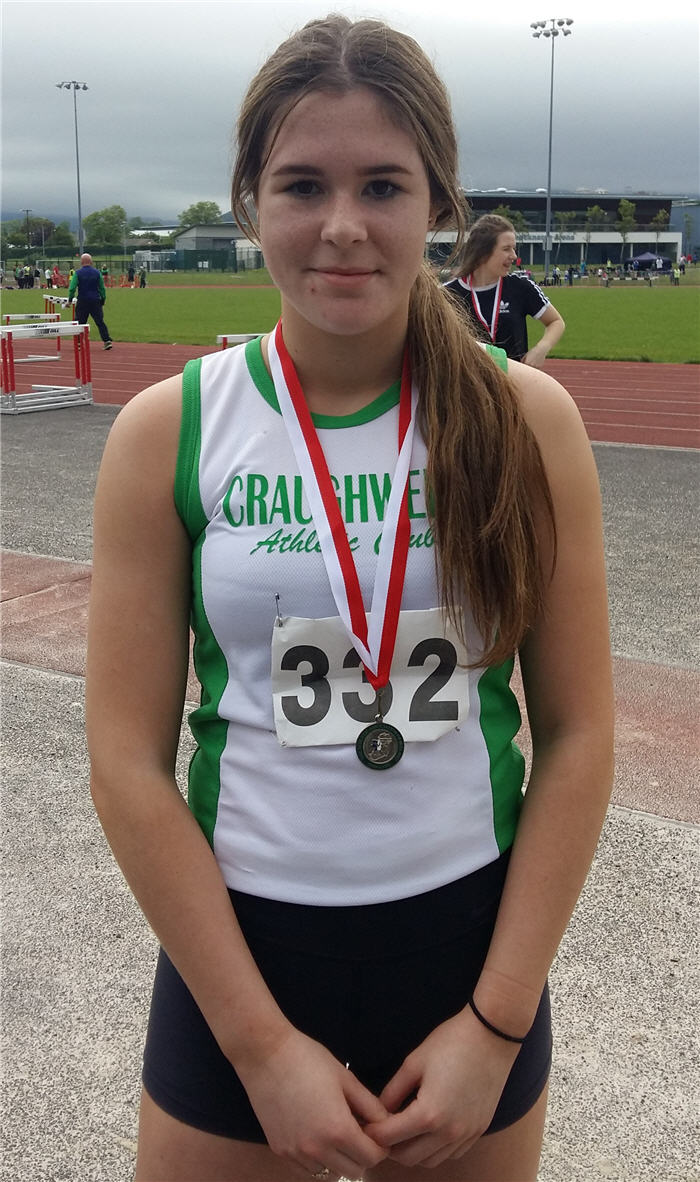 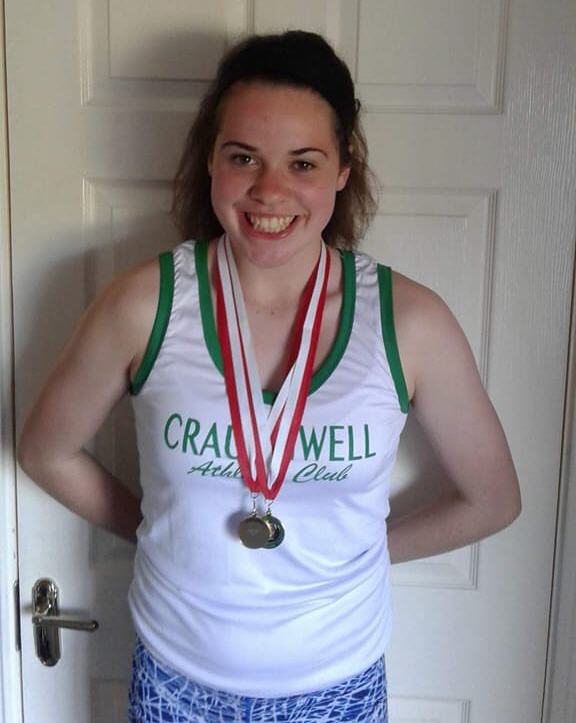 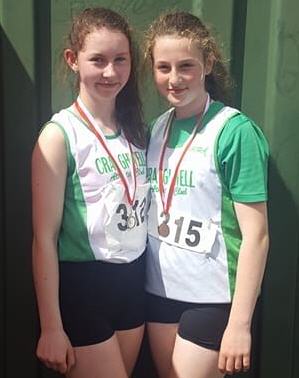 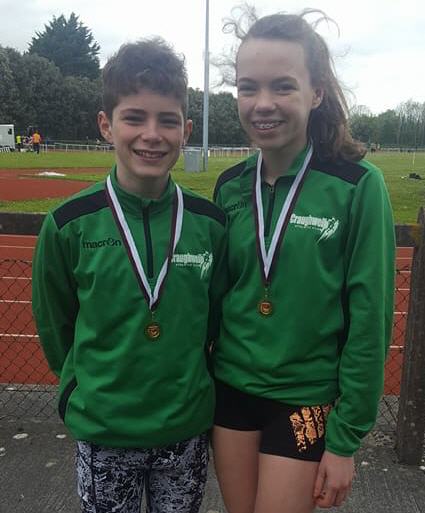 Alisha Larkin and Ailbhe Folan, 2nd and 3rd in the U15 Girls 100m and
James Furey and Ellie Cronin 5th and 1st in the U15 High Jump

Conor Trehy is showing great ability for the triple jump having only commenced it recently and won the Connacht title with a leap of 9.37m. James Furey took bronze in the javelin with 23.53m, placed 6th in the 100m hurdles and was unlucky to exit the high jump at 1.25m. Oisin Davis was unlucky to break all 3 of his jumps in the U15 long jump but raced to a good time of 2.32.13 to place 6th in the 800m. In the U15 relays, both girls and boys raced to the silver medals with the girl’s team of Aoife Kelly, Ellie Cronin, Alisha Larkin and Ailbhe Folan taking their silver in a time of 54.06 and the boys team of Oisin Davis, Robert Urquhart, Lughaigh Morgan and James Furey doing likewise in a time of 54.53 despite an infringement in the zone 2 changeover where James had to run around an impeding athlete to avoid a collision. 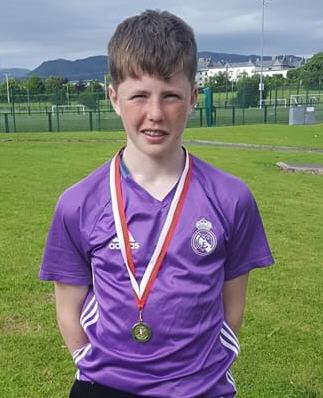 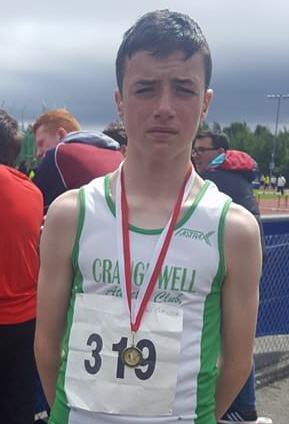 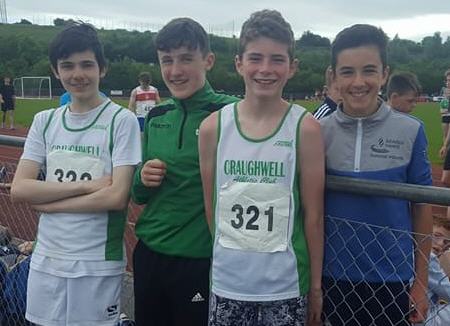 In the U14 grade, the U14 boys raced to bronze medals in their relay in a time of 56.7 with their team of Liam McDonagh, Lukas Schukat, Kieran O’Connor and Conor Hoade. The girls’ teams placed 5th and 9th in times of 58.03 and 62.30 with Eve Ayo, Rebecca Lynch, Oliwia Koman and Hannah Hynes 5th and Erin Kelly, Saoirse Pierce, Eleanor Nicholls and Aoibheann Keane 9th. Lukas Schukat had a busy 30 minutes when the U14 boys high jump and long jump were called at the same time. He leaped a very impressive initial jump and PB of 4.57m in the long jump before rushing to the high jump where he leaped a PB of 1.57m to take the Connacht title and rush back to the long jump for his final 2 attempts only to be told he couldn’t take them as they had completed the competition. His first attempt of 4.57m was good enough to take the bronze but it could easily have been gold had he being given his second and third attempt as it was won in 4.66m and Lukas had jumped over 5m at school’s trials earlier in the week. Conor Hoade had a good day also with 4th place in the long jump with a best of 4.52m and followed this up with a fine victory in the 75m hurdles in 12.44 with Robert Urquhart hot on his heels in 3rd place in 12.97. Kieran O’Connor raced to a good time of 11.66 in the 80m sprint and followed this up with a 10th place finish in the 200m in 30.38. Conor Hoade and Robert Urquhart took 6th and 9th place in the 200m in times of 29.10 and 29.29. Rebecca Lynch was very impressive when taking the Connacht U14 girls long jump title with a winning leap of 4.38m and added a bronze in the javelin with a throw of 16.50.

Full results of the day are here:- ConnachtOutdoorsU14-SeniorResults2017.pdf 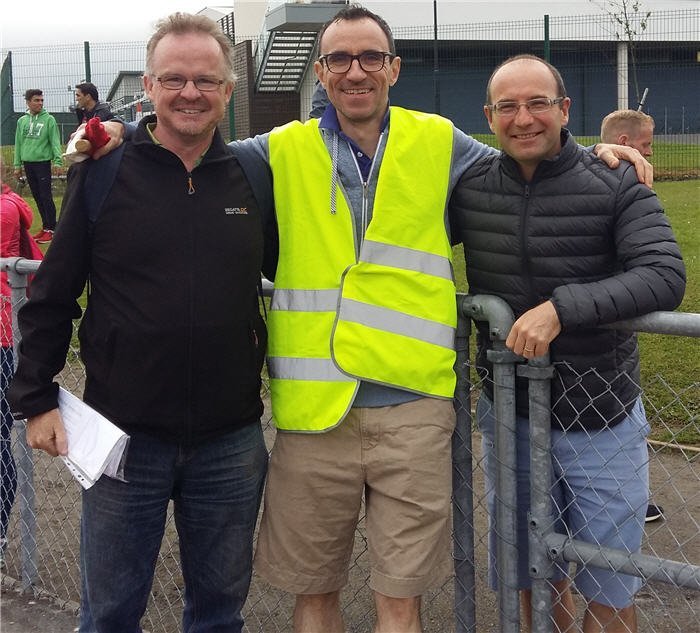