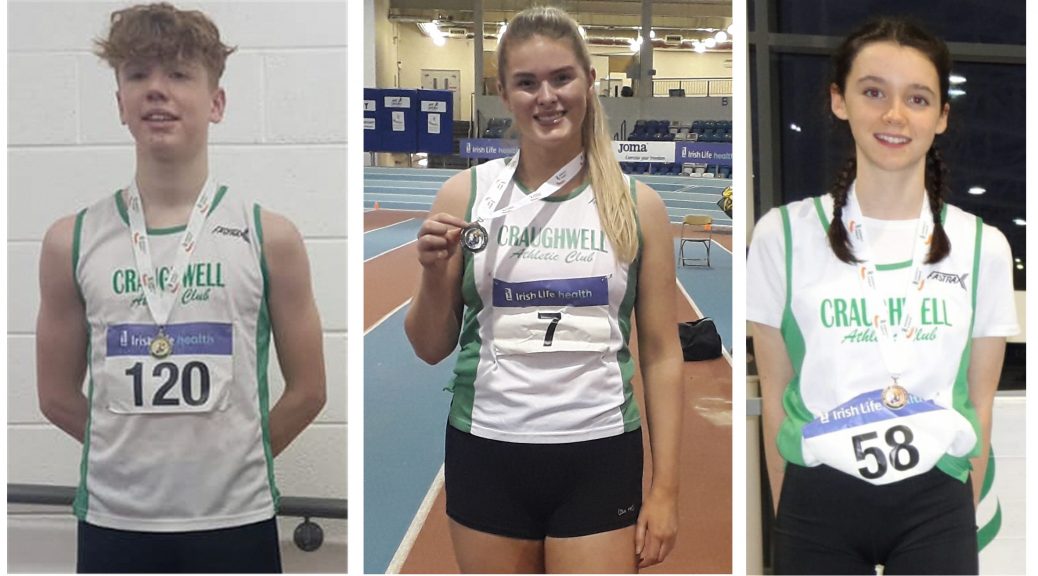 The club had a large contingent of athletes in action yesterday with some wonderful performances at the National Indoor Combined Events Championships in Athlone IT. A long day which kicked off the with U15 girls and boys high jump at 10am in the morning concluded just after 7pm in the evening with the youth women’s 800m. But despite the long day, from a coach’s perspective it was wonderful to have a competition without the pandemic restrictions of everyone staying in their seats, coaches not been present, etc. as people were able to move freely to watch the different events in the arena following the dramatic lifting of restrictions on the eve of the event.

The day yielded an impressive gold, silver and bronze for the club with Sean Hoade taking gold in the U15 Boys Pentathlon, Laura Cunningham silver in the Senior Women’s Pentathlon and Emma O’Donovan bronze in the U15 Girls Pentathlon.

Sean Hoade was in blistering form in the U15 Boys event with victory in the hurdles in 9.50 and in the shot putt in 11.32m, 2nd place in the long jump with an impressive 5.30m, 4th place in the high jump with 1.55m unlucky not to clear the 1.60m and rounding it off with an impressive PB to win his heat of the 800m with a gut-busting 2:18.77. Sean’s performances were PBs in 4 of the 5 events – hurdles, shot, long jump and 800m. This was Sean’s first time to claim a National title and it looks like it will be the first of many to come for a fine athlete.

In the Senior Women’s event Laura Cunningham was unlucky in the 60m hurdles to get her stride wrong off the first hurdle leading to 4-stepping the remainder for a time of 11.93. But recovering well in the remaining events, Laura won the long jump with a leap of 4.67m and the shot put with a throw of 8.24m, cleared 1.52m in the high jump and finished with a 2:55.65 in the 800m to take the silver medal. It was Laura’s first time doing the Combined Events since the secondary school CE in 2018, great to see her back competing in what is the toughest competition for track & field athletes.

Emma O’Donovan wrapped up the medals for the club with a fantastic series of performances to take bronze in the U15 Girls event, including 2 PBs over the high jump with 1.47m and 1.50m before going ever so close to 1.53. A powerful 10.46 in the hurdles, 6.98m in the shot and 4.58m had Emma in contention for the medals going into the final event, the 800m where Emma ran a superb race to place 3rd in the final heat in a time of 2:35.99 which jumped her into 3rd place overall to come home with a wonderful bronze medal.

In a high-quality Youth Womens event, Jade Moorhead raced into an early lead with a big PB of 9.66 in the hurdles and a super 1.58m in the high jump but slipped back a little later in the day in her less-favored events, nonetheless heaving the shot put out to a PB of 6.55m, leaping 4.51m in the long jump and running 2:47.16 in the 800m – placing 5th overall in the points table.

Conor Penney had the top individual performance of the day possibly across all athletes present with not just 1 but 4 PBs in the high jump early in the day. Conor was in electric form, entering the competition at 1.55m before clearing 1.45, 1.50, 1.55, 1.60, 1.63, 1.66, 1.69, 1.72 (PB), 1.75 (PB), 1.78 (PB) and 1.81 (PB). Conor’s leap obliterated the club’s previous age group best for U15 high jump and was remarkable given he is still only 13 years old. In fact, only that his hurdles were being called it’s quite likely that Conor would have gone even higher as he was comfortably over the 1.81. Conor followed up this performance with a brilliant 2nd place finish in 9.51 in the hurdles only 0.01s behind Sean Hoade and a solid 4.75m in the long jump and 8.05m in the shot. Entering the final 800m event, Conor was in 3rd place in the points table and put in a huge effort in the 800m with 2:44.32 to knock over 14 seconds off his PB from last summer’s CE to try to hold 3rd place but was overtaken in the points table and had to settle for 4th place. Still a fabulous performance, particularly the series of high jump PBs.