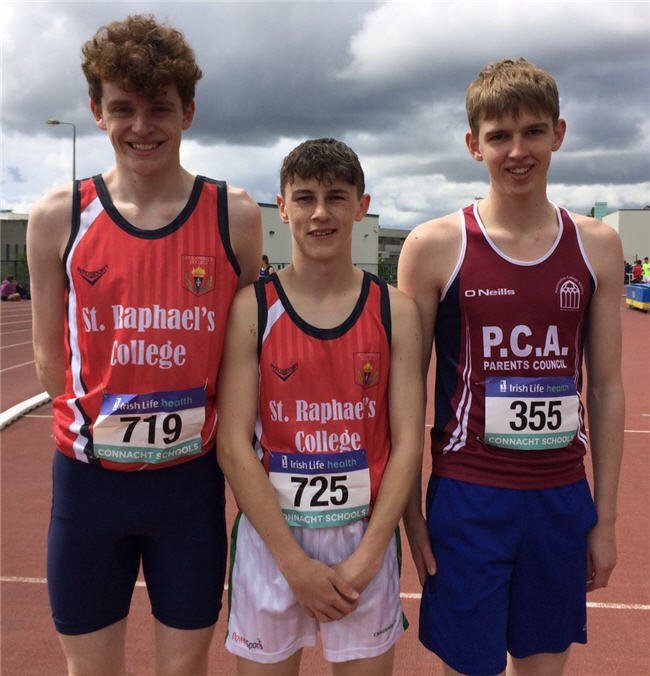 There were some exceptional performances from athletes from the club on Thursday in the finals of the Connacht Schools track & field which were held in Athlone, particularly in the 800m and triple jump events.

Weather conditions were not ideal with a swirling wind and bouts of rain but nonetheless the track saw some exceptional 800m times particularly from Kyle Moorhead with 2.12 in the Junior Boys, Oisin Lyons with 2.03 in the Intermediate Boys and Ben Garrard with 2.01 in the Senior Boys. Full results are here.

While there did not appear to be much of a trailing wind in the jumps, there were many PBs for our athletes with some exceptional jumping including a massive PB of 5.40m for Gavin Surlis in the Junior Boys long jump which was his first time over 5m and an equally massive PB for Laura Cunningham in the Senior Girls triple jump with an 11m jump on her final attempt which is 58cm further than Laura jumped only three and half weeks ago and a huge 71cm further than her PB from last July. Equally impressive, Leanagh Gilligan leaped a massive 10.50m in the Intermediate Triple Jump which is over a metre further than her best jump from last year – brilliant jumping! There were PBs also for Conor Roberts, Ava Finn and Shauna Tobin in the long jump and for Eva Whyte in both long jump and triple jump. In possibility the first time that Connacht schools has conducted a pole vault event, Ciana Reidy was very impressive when vaulting to a new PB of 2.30m.

Incidentally, Laura’s 11m triple jump would rank her currently as 2nd best in Ireland amongst jumpers of any age while her indoor best of 10.55 earlier this year ranked her 12th best amongst senior women indoors in 2017.

Provisional results have still to be announced so there are no track times to report on yet for the sprints. The following are preliminary results gathered from our coaches who were there on the day. I will update them as more information becomes available.