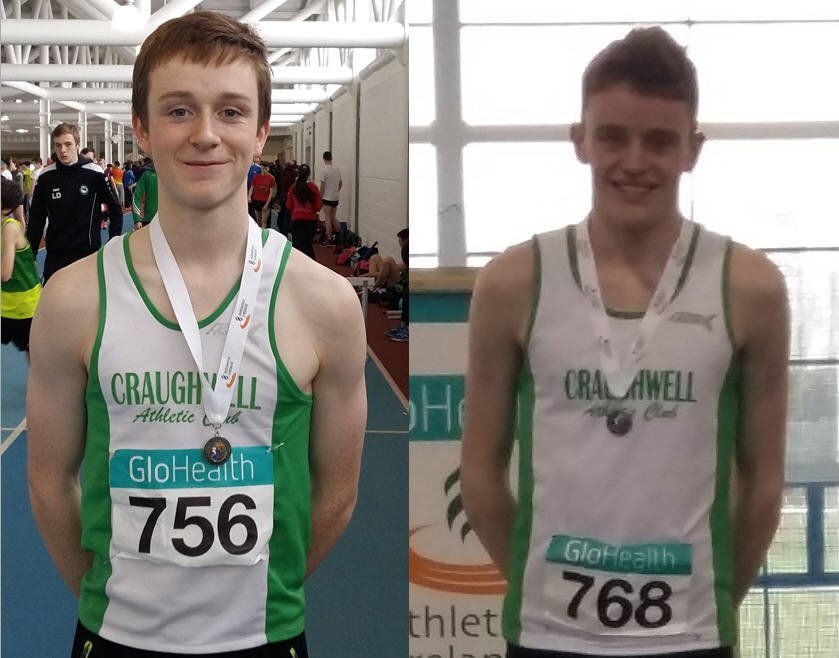 Another weekend of high-octane athletics took place in Athlone International Arena at the weekend at the National Juvenile Indoor Championships. Saturday saw some exceptional performances with the highlight being Evan Hallinan’s gold medal in the U12 boys high jump with a clearance of 1.25m having earlier placed 4th in the long jump with a fine 4.20m leap. While Sunday saw 3 more medals added with Jerry Keary taking the silver in a riveting U17 high jump competition where he tied on 1.89m with the eventual winner and losing out on countback of knocked bars, Daniel Callanan-Forde taking the silver in the U17 long jump with an impressive 6.15m and Conor Hoade taking the silver medal in the final of the U13 boys hurdles. And it was unlucky 4th place also for Matthew McKernan in the U18 long jump and for Aisling Keady in the U18 high jump. Other notable performances included 5th place for Ryan Gallagher in the U15 high jump and 6th place for Shaun Gilligan in both the U14 60m and long jump.

In the U12 high jump, no less than 8 jumpers cleared the winning height but Evan Hallinan’s fine clearances of all heights up to and including 1.25m along with Waterford AC’s David Scanlon saw the 2 athletes tie for the gold medal. In the earlier long jump event, Evan was in 3rd place after 4 rounds with a splendid 4.20m and was just pipped for bronze in round 5 when another jumper leaped to 4.23m … so close! It was a similar experience for Danial Callanan-Forde in the U17 long jump, leading with a 6.15m going into the final round where another jumper leapt to 6.29m on his last jump and despite Daniel’s best efforts on his final attempt which saw him jump another 6.15m, he had to settle for silver. While in the U17 high jump, Jerry Keary just barely grazed 1.92m with his heel which would have taken the Irish title to add to his Scottish one from a couple of weeks ago – fantastic jumping.

Well done to all athletes – the standard is incredibly high at National level. To make it to the All-Irelands is a huge achievement, to get a PB or place in the top 8 there is a massive success and to take a medal is unbelievable. So well done all and roll on the relays and the outdoors!