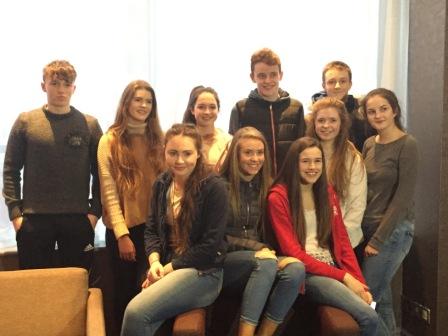 It was back to Glasgow on Friday for another fantastic trip for the club’s athletes who were competing in the Scottish Indoor Track & Field. This year the format of the competition has split the event into 2 separate weekends in January and March so we have to go twice! U17s and seniors competing this weekend and U13/15/20s competing the first weekend of March. 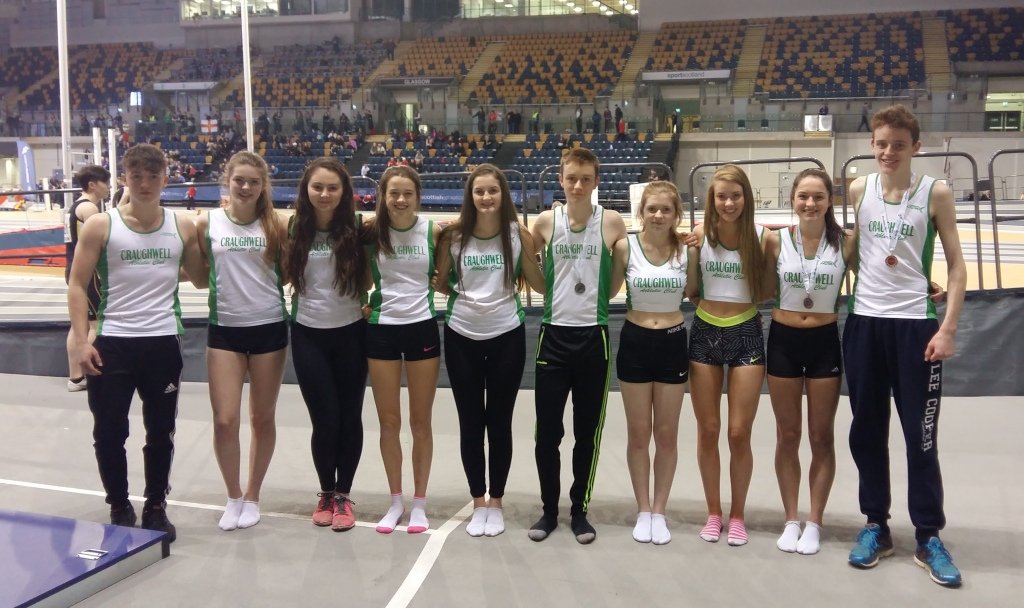 A group of 10 of our U17s made the exciting journey and had such a wonderful weekend – excelling in the competition and having a great time in Glasgow. The club is really proud of them and they represented themselves, their families, the club and their country so well both on and off the track.

We arrived in Glasgow in the middle of the day Friday, flying into Glasgow Airport and bussing into the city centre where we walking to our hotel Jury’s. After the customary all-you-can-eat Chinese Friday evening, the athletes got an early night as we had to be at the Emirates Arena at 9am the following morning.

The way the program was structured resulted in non-stop action from the Craughwell athletes with someone in action every 45 minutes or less – so time flew by from 9am to 5.30pm that day.

There were many highlights to the day but I guess the biggest was the fantastic performances which yielded National medals against tough opposition. The first medal arrived in the high jump where Jerry Keary was in unbelievable form. Jerry’s PB is 1.80m and he has been threatening to break that for a number of months and what better way to do it than smash it twice with a 10cm PB and in the process become the Scottish Champion! This is the third time an athlete from the club has achieved this in high jump with Aisling Keady and Cathriona Farrell a few years ago. Jerry joined the competition with the bar at 1.65m and sailed cleanly over 1.65, 1.70, 1.75, 1.80. As cool as a breeze when it came to 1.85m, Jerry paused momentarily to join in the slow hand clap for someone jumping in the nearby long jump and turned back to the high jump and sailed high over 1.85m on his first attempt – superb stuff. The competition was down to just 2 athletes at this point and his Scottish competitor did likewise over 1.85m. So up the bar went to 1.90m. Jerry struggled on his first 2 attempts, finding it hard to get his customary leap to fire as he ran into an unaccustomed height and struggled to take-off. With the other athlete also struggling, it was all to play for and on his final attempt, bolstered by a huge cheer from the watching Craughwell athletes and parents, Jerry blasted high over the bar and YES nailed the 1.90m. There was a mad cheer from the watching Craughwell gang – making our presence known in this fine arena. With the other athlete failing on his final attempt, that was it – Scottish National title for Jerry, new PB by 10cm, a dream day!

Almost immediately Daniel’s triple jump competition arrived and an equally impressive performance from another fine athlete. Daniel’s series of jumps throughout the competition kept getting better and better with 11.81m, 11.83m and then 12.01m in the first round of jumps to be in 4th place as the jumps entered the second round. Prior to this Daniel’s PB was just less than 11m so he had already added a massive 1 metre at this stage. And he just got better and better every time he jumped – leaping 12.13m and then a huge 12.33m on his final jump to take the silver medal.

The third medal for the club came from another super athlete who has been battling hard and coming close to National success since joining the club 4 years ago. But this was Lorraine’ day to shine and she jumped supremely to clear all heights up to and including 1.53m on her first attempt. That was good enough to take the bronze medal along with 2 other athletes tied at the same height. Ciana Reidy was unlucky in the same event to exit at 1.53m, having cleared 1.48m. 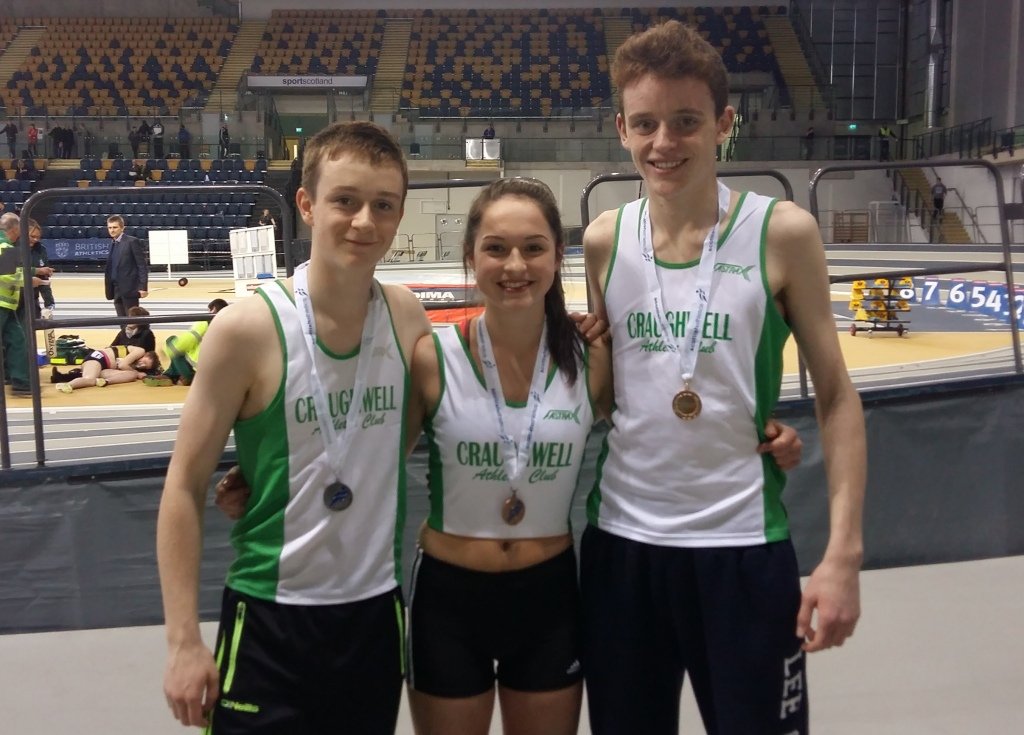 Daniel, Lorraine and Jerry with their medals 🙂

Earlier the day kicked off with the long jump at 10am where all 7 of our girls were competing. A little bit of nerves perhaps contributed to a few breaks as the athletes got into their stride and while there were no PBs, everyone jumped close to their PB and performed well. Lorraine led the way with 4.74 jump with Caoilin next with a 4.60m and Ciana with 4.53m. Laura was unlucky to break her 2 first jumps by a small margin and had to record a safe jump on her final attempt which resulted in 4.40m – unlucky on the day. Aoife likewise struggled with her mark and had to take a safe jump on her final attempt which yield 4.04m but was from considerably behind the board. Shauna and Martha were the closest to their PBs with Shauna leaping 3.97m and Martha 3.25m. Laura was in action again late in the day in the triple jump where she placed 11th with a best of 9.30m – not far at all from the medal winning jumps.

Oisin had a tough run in the 800m where he had hoped to make the final but a tactical race which saw 4 athletes made a big break after 400m left Oisin chasing the lead and not getting an automatic qualification spot. With a time of 2.12.48, it wasn’t enough to make the final. Daniel and Jerry followed the girls long jump with their long jump where Daniel jumped a fine 5.96m to place 6th but he was a little disappointed as his mind had been set on a medal but he more than made up for it later in the triple jump! Jerry was unlucky with a massive leap on his first jump that looked over the 6m but he broke that jump and his second jump. His final jump was a cautious 5.41m. But again Jerry had his big win later on and in fact the long jump was probably a good warm-up for it!

And one final notable performance to mention came from Caoilin Milton in the 200m where she ran a superb 27.73 to qualify for the semi-finals. The semi-final didn’t go as well but to make it through the first round was a superb achievement.

All in all it was a great day – some ups and downs but the ups were huge ones! Well done everyone!