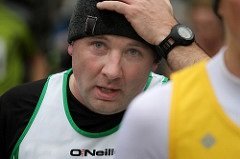 This race has become one of my road racing highlights of the year because of its seasonal date and it’s great atmosphere and it proves popular no matter what weather is thrown at it.
This year was my tenth run and has been the only race that I have ran yearly since I moved to Galway.

Life tends to throw some spanners into the mix and there was a year which I had to force myself to run just to keep up the tradition which I am glad I did now.
I first ran this race in 2006 having agreed to the night before after a few drinks at my wife’s aunts house whose husband is Clare River harriers frank Kitt.

It was well before online registration so I arrived on the morning and signed up. It was my first road race since I had ran the Dublin city marathon in 2000 on a whim to mark the millennium .It took me 7 seconds over the hour to run the 10km. Frank made sure I went in for the tea afterwards as it was part of the race formalities.

That’s how it all started and the race then became a yearly event for me before I starting running regularly and eventually I joined Craughwell Ac fit for life programme. The race has a different colour hat each year and this years was pink in colour to the delight of all the female runners.
This year Craughwell senior club had their autumn training plan structured to suit a 10km distance that brought us right up to this race event, the success of the previous summer training regime which saw the majority post PBs for the streets of Galway 8km started to add pressure to perform well again for this race. My fastest Athenry race over the years was in 2012 when I posted 46.29 that year.

The autumn Training went well for me, and I attended the majority of the structured speed session evenings at the track. However a week before the race I was down at my father’s 70th birthday at home in Offaly and myself and my brothers joined him for a novelty footgolf game at the local golf course in Highfield. I managed to pull my quad on the 14th hole kicking off from the tee. I thought that was that, I’ll never get it right in one week. Thankfully with the aid of a lot of arnica, wickedly hot Epsom salt baths and stubbornness, I got myself in running order.

The weather has always played a big part in this race, I prefer the colder weather when running but the wind and rain we can all do without. The weather was favourable this year, perfect conditions really apart from a few areas of road with minor flooding. Registration was quick, in and out of hall in a few minutes and I collected my Athenry yearly program and dropped it back to the car which I had managed to park just inside the school grounds. Before the main event, I ran behind my two daughters for their junior race which gave me a nice little warm up for my own race, I then went to the start line with clubmate Steve Carty but did not join him for his more strenuous warm up as I was still wary of my leg and was taking things easy.

My plan was to keep the first two km at 45min pace and see how I was fairing. The start of the race was less congested than any other year and we got off quite quickly, I had met a lot of Craughwell Ac runners Mike D, Mike Mc , Betty , Tony , Steve , Niamh, Emer , Lorraine and Kieran just before the start and there was a great atmosphere around with everyone eager to get going.
My older brother and one of my brother in laws were running also today, one had his shorts waistband malfunction and was trying to remedy the situation with the safety pins for the race number with gave us a good laugh before the race took off.

My first two kms went approx. 4.15 and 4.20 and I was feeling good, Steve Carty moved ahead at this stage picking up his own pace , I took it easy on the rises in the next few kms and was hoping to be close to 22.30 for the 5km marker , the 45 minute pacer and his small posse passed me just before the 5km marker and he was spot on with the clock when he passed , I was about 8 seconds over. Club mate Niamh Flavin passed keeping with the 45 minute pacer at that stage and was running very steady. It is great seeing so many Craughwell Ac singlets on the road.

The next km brings you onto the road again and I always get a buzz here as you know you’re on the home stretch , I tried to push my pace but my leg was tightening a little so I had to just try maintain my pace. I got annoyed a few times with lads slowing right up and tiptoeing through some water logged areas because it knocked me off my pace each time. One guy with his Nike “just do it “top I found particularly ironic…

There were plenty of cheers from the sidelines around the route which really encourages you. I forsaked the water stops as I generally wouldn’t take water for this distance unless it was warm temperature.

I pushed the last two kms but knew I was going to be a little over the 45 minutes,
My chip time was 45.24 so I was pleased with a new PB for the race but happier that I should manage a quicker 10km in the new year.

The race afters were greatly appreciated and the event was as always well organised with great numbers helping out everywhere. There were some great PBs again by other clubmates which is great to see reward from the track training.

Full set of photographs by John O’ Connor from the day can be found at https://www.flickr.com/photos/edenhill77/

Andrew Talbot of Clare River Harriers has shared his photographs on facebook which can be found here https://www.facebook.com/athenryac/?fref=ts