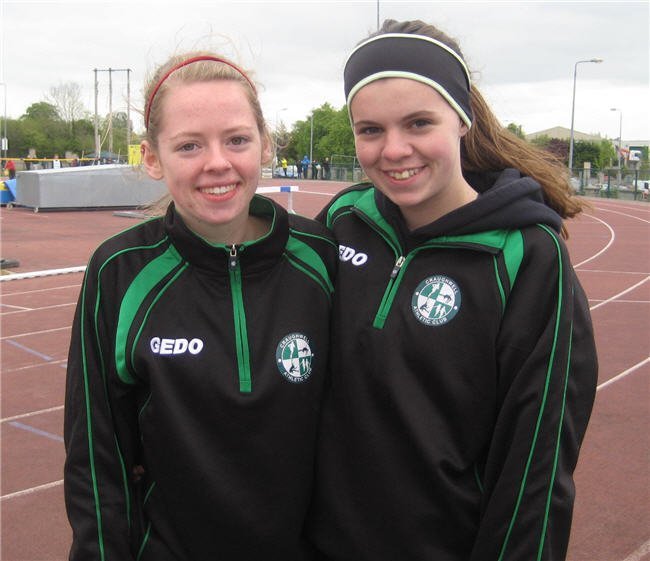 Athletes from the club competed brilliantly yesterday for their schools at the Connacht Schools T&F finals which were held in Athlone. With forecasts of dismal weather earlier in the week, we were pleasantly surprised by bright but windy conditions.

There were many fine performances across the range of the events throughout the day, none more so than in some high quality sprint action where Connacht saw possibly the highest standard ever in the senior boys 100m with 4 international athletes featuring in the top 4 and our own Conor Duggan (Pres Athenry) and Aidan Conneely (Calasanctius) taking 2nd and 4th places. Cillian Dolan (Pres) also made it a memorable day when taking the Connacht title in the Intermediate Boys 100m and Conor and Cillian combined with GCH’s Cillian Greene and Athenry AC’s Evan Quirke for a comprehensive victory for the Pres in the Senior 4x100m. Conor added a further silver in the 200m while Aidan took the title in the Senior long jump with an impressive 6.26m. The success continued in the this grade with Calasanctius duo Jamie Fallon and Damian O’Boyle recording comfortable victories in the 5000m and 1500m, while Adam Flynn (Pres) recorded a notable silver in the Senior high jump with a fine clearance of 1.65m, having improved his PB to 1.60m just 2 weeks ago. 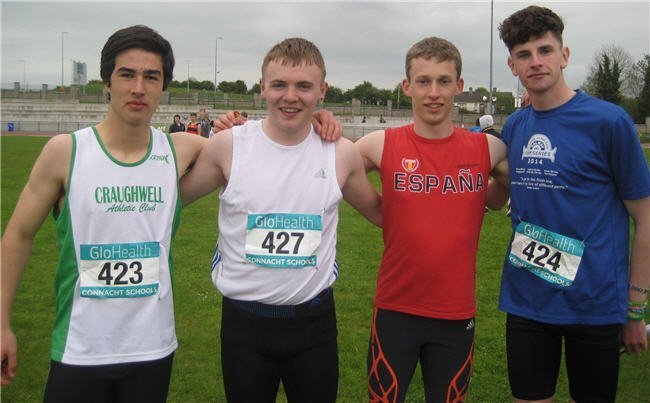 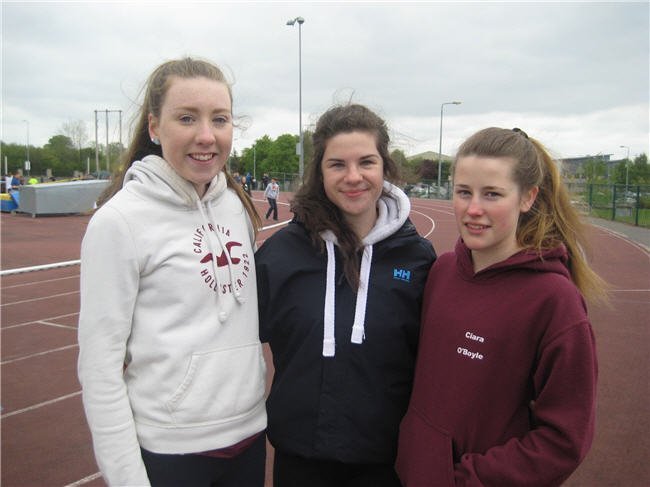 Sinead Treacy (St Raphael’s) finished strongly in equally strong Senior Girls 100m and 200m races which featured 3 Irish internationals, with Sinead claiming 2nd place in both races, while Tara McNally (Loughrea VS) took the Connacht title in the Senior 400m and Ciara Greene (The Bower Athlone) did likewise with an impressive performance in the steeplechase, Ciara’s first time tackling this formidable event.

In the Intermediate Grade, Matthew McKernan (Calasanctius) was the star performer with double gold in the long jump (5.92) and triple jump. Indeed his performance in the long jump was a big bonus as Matthew had an off day in the Connacht semi-finals where he placed outside the top-6 qualifiers and only got into the long jump on the day when one of the qualifiers failed to show up. Ciara O’Boyle (Pres) took the Connacht title in the 300m hurdles while Dearbhaile Walsh (Seamount) ran bravely in the U16 mile to take 4th place and Grainne McDaid (Pres) battled to 6th place in the 1500m. Lorraine Delaney (Calasanctius) was in splendid jumping performance in the windy conditions with a 1.50m leap to take the Connacht high jump title with Aisling Keady (Pres) also in fine form to take the silver medal with a 1.45m jump.

Laura Cunningham (Pres) jumped brilliantly to take the silver medal in the long jump in spite of carrying a quad injury. With her leg strapped, Laura jumped a best of 4.65. Caoilin Milton (Calasanctius) also jumped really well with a best of 4.34 to take the bronze. Lorraine Delaney was unlucky to record 3 breaks in the same event, with her final jump possibly being good enough to have won the event but resulting in a break of a few centimetres. St Raphael’s duo Jerry Keary and Daniel Callanan-Forde had another memorable day which yielded a PB in the high jump for Jerry with an impressive 1.75m and double bronze for Daniel in the long jump and triple jump, with his long jump an impressive 5.73 despite having to chop his stride in the last few steps of the run-in. 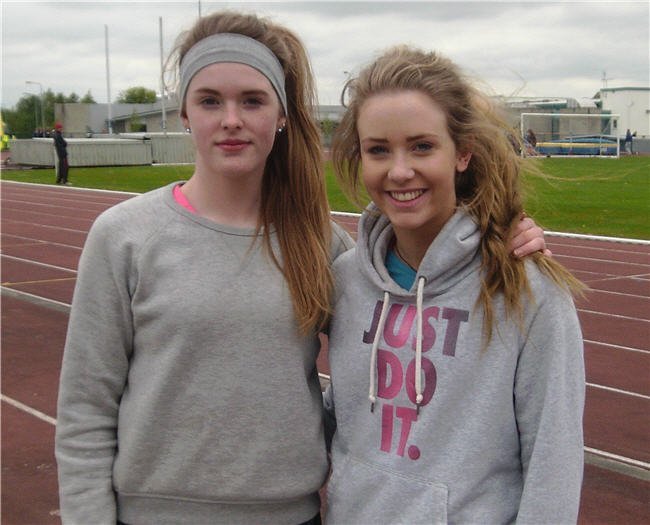 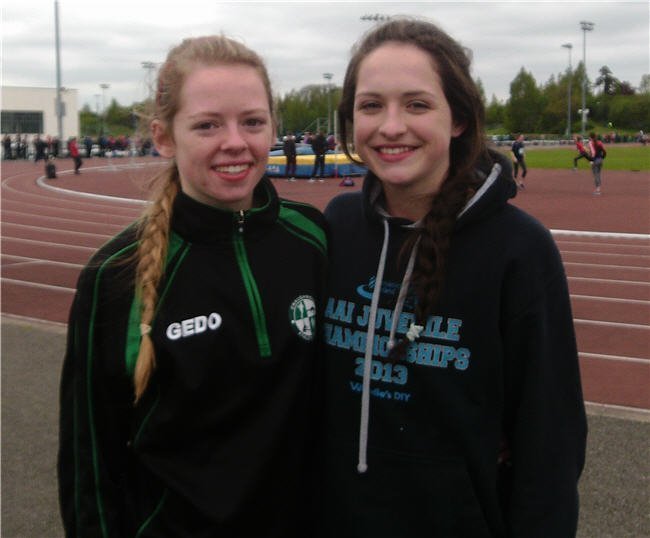 Further success followed in the Junior grade where Oisin Lyons (Calasanctius) romped to victory in the 800m in a time of 2.12. Siona Lawless (Loughrea VS) took the victory in the long jump with Hannah-Kate Silke (Calasanctius) earning her first top-3 finished with a 4.07m jump to take 2nd place in the same event and Shauna Tobin (Pres) placing 6th. Oisin Shannon (Pres) took an impressive silver in the 100m while Emma Urquhart had a very successful series of throws in the discus to also take the silver medal, with Leigha O’Boyle (Calasanctius) in 5th place. In the 1500m Leah Connaughton (Calasanctius) and Fiona Commins (Pres) placed 8th and 11th while Anna Farrelly (Pres) placed 3rd in the javelin.

In the minor grade, Sarah Callanan (Pres) led the way with victory in the shot putt while Eva Kelly (Loughrea VS) took silver in the same event with 8.28m. Eva had shortly beforehand placed 6th with a leap of 4.16m in a high quality long jump competition where school-mate Leanagh Gilligan took the silver medal with a fine jump of 4.48m. Earlier Leanagh was in splendid jumping form to record a new PB of 1.50m in the high jump to take the silver medal, almost clearing the 1.55m on her first attempt. Patrick Noonan (Pres) ran a tactically astute 1500m to take 4th place while St Raphael’s duo Sean Connaughton and Ryan Gallagher took 3rd and 6th place in the 200m.

That wraps up a fine series of performances from our secondary school athletes. I will add the official results when published. In summary athletes from the club took a total of 14 Connacht titles, 14 silver medals and 4 bronze medals. All who placed in the top 2 go forward to the All-Irelands in Tullamore on Saturday 30th May as do the 3rd place finishers in the field events and distance races.