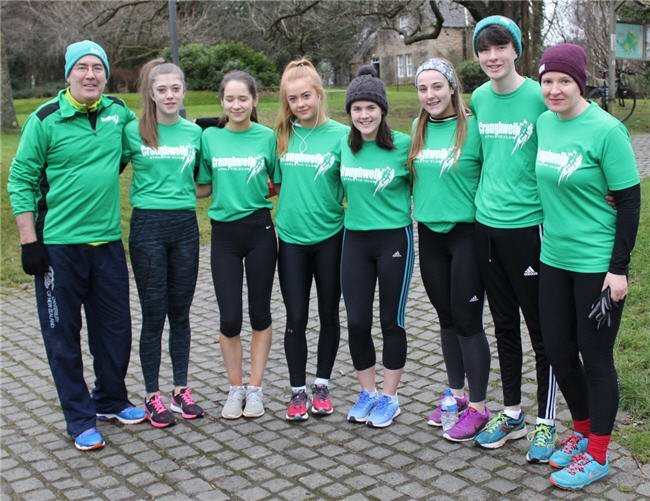 Fit4youth restarts on Thursday August 16th in preparation for the Craughwell Color run and 5k in mid-September. We hope to have an even more enjoyable year than last year and start by aiming to complete our 2017 4 provinces runs over the next couple of months…Munster & Ulster awaits! For any new teenagers wishing to join, you can get in touch with Brendan at 087 248 7720 for more information.

Fit4Youth on Tour in Glasgow!

Following our pre-Christmas training the group took to the road more than once in 2017 with the group making its international debut when 6 of our group proudly represented the Fit4Youth group for the Glasgow Pollock Park Run. Travelling out with the 60-plus other athletes, parents and caches on Friday night, the group quickly settled into to Jury’s Hotel and then an all-you-can-eat Chinese buffet nearby! All were up bright and early the next morning to get a taxi out to Pollock Park, where we joined over 300 runners. Ailvhe, Kate, Géaroid, Lauren, Alison, Andrea and Joey all completed the 5k loop in style, encouraged all the way by Anne and Lorraine (who were so excited they had stayed up all previous night in eager anticipation of cheering us on!). Once the group hugs and photos were done it was time for some great Scottish hospitality as we enjoyed tea and scones, while we shared stories with our Scottish hosts. And that was only the start of the day and by 11.30 some of us were dashing to Celtic Park to catch Celtic v Inverness and more were already in the shops! A stop over at the nearby fabulous Emirates stadium to cheer on the Craughwell AC athletes followed the Celtic match for us. Later that evening we all headed out for dinner and a not so early night! Next morning, first stop was the all-important breakfast. Thereafter it appeared the choice was shopping, shopping or shopping for most except for those of us that escaped back to the Emirates stadium for some more fantastic performances from our own club athletes. A late flight out of Glasgow saw us home safe and well in the early hours of Monday morning. A huge thank you for all that travelled that made this such a memorable weekend , especially the athletes who’s excellent behavior and performances ensures we will be doing it all again next year . A special word for Micheal Tobin who coordinated the whole weekend and did everything except fly the plane and cook us breakfast….. He even stayed up late on Friday night / Saturday morning to take care of Lorraine & Anne! …. Thanks again. 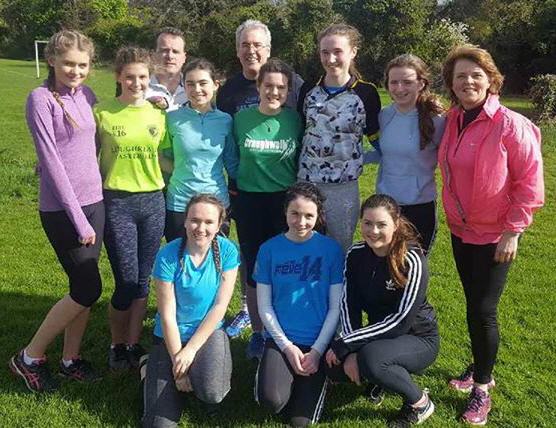 Fit4Youth on Tour in Marley Park!

Next the group travelled to Marlay Park Rathfarnham Dublin on Easter Saturday morning for their first leg of our 2017 4 Provinces runs. With a 6.30 meet at the Plaza this 9 strong group must now hold the club record for the earliest start (well everyone except for Kate who was late as Ailvhe predicted! …although Ailvhe herself hadn’t even got of a bed to join us, on this occasion). Arriving in Dublin all was quite in Marlay Park but not for long and by 9.30 over 500 runners took to the start line and we were off. The course setting is absolutely fantastic, a full 5km meandering flat loop, along the tree lined park paths .With lots of encouragement from the volunteers, other park users, fellow runners and each other we all had a thoroughly enjoyable run. Once we got our breaths back the next race was on… to see who would make it first to their next destination…. either Dundrum shopping centre, IKEA or a full Irish breakfast (Guess where my car was headed ….yes and I enjoyed that breakfast!) A special thanks to the parents who car pooled and especially Ann-Marie and Declan for joining us on the run. Well done to all, Kate, Tara, Aisling, Maria. Grace, Niamh, Sarah, Holly and Claire. Looking forward already to the next road trip!. 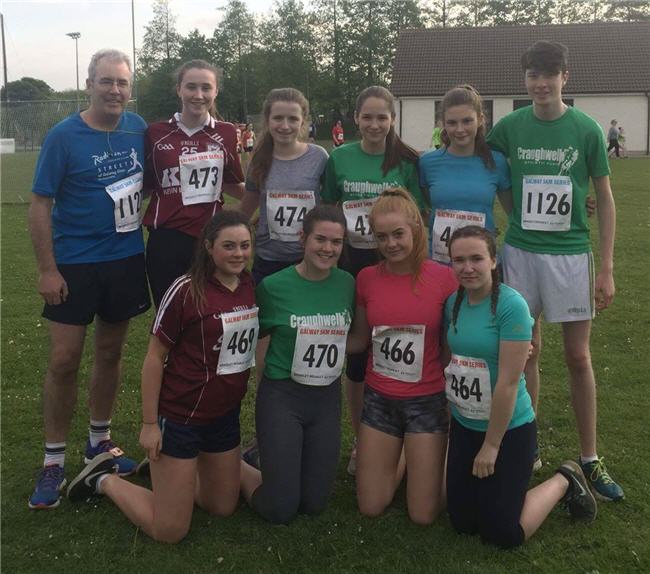 Fit4Youth on Tour in Craughwell !!

Thereafter the Fit4Youth group “stayed local” and took part in the Craughwell, Loughrea & Athenry Legs of the Galway 5k series.

On a glorious sunny Tuesday evening 9 of our group joined over 700 runners down the main street in Craughwell, on what was a truly memorable sight. Going at a strong pace down the hill from Craughwell School, the group took advantage of the downhill run to set a strong early pace. Encouraged they continued to run strong as they turned up by the hurling field, ignoring the strong incline, before turning out of the village where the runners began to spread out a little. Working hard, encouraged by each other, the many spectators and other runners, they all quickly passed the 3km marker and confidently headed for the finish. It was great to see them all “empty the tank” as they strided over the finish line… tired but smiling! Well done to Géaroid, Lauren, Ailvhe, Kate, Grace, Tara, Holly, Niamh and Sarah. 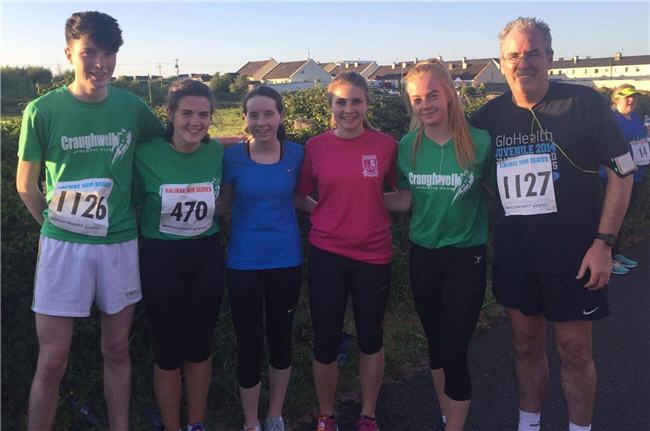 Fit4Youth on Tour in Loughrea !!

Encouraged by the first week’s run Géaroid, Lauren, Kate, Rosin & Caoimhe took to the hills of Loughrea with Cepta & I on the following Tuesday. Not daunted by the 1Km uphill start or even the 4th km up Tulla Hill, the group took on the challenge and ran extremely well. The first 1km as ever was at a good strong pace despite the steep incline. From there they found their rhythm, weaving in and out among the runners, encouraged by all around them. Turning at the 3k mark Tulla hill awaited but they took it in their stride, enjoying the last 1km downhill finish. A wonderful sunny evening, capped by a wonderful performance, well done to all.

We then took on the “fast” Athenry to wrap up the 5k series with Ailvhe & Kate once again leading the charge.

The last run of the season was the Killeeneen 5k, where. Grace and Tara joined us on their first “free “ evening after the junior cert exams and it was the first outing with the group for Leah Newell, Leah Farrelly, Cait Daley and Leanne Jordon. They all pushed on strong and did themselves proud. Once again well done and a fantastic end to a fantastic year.