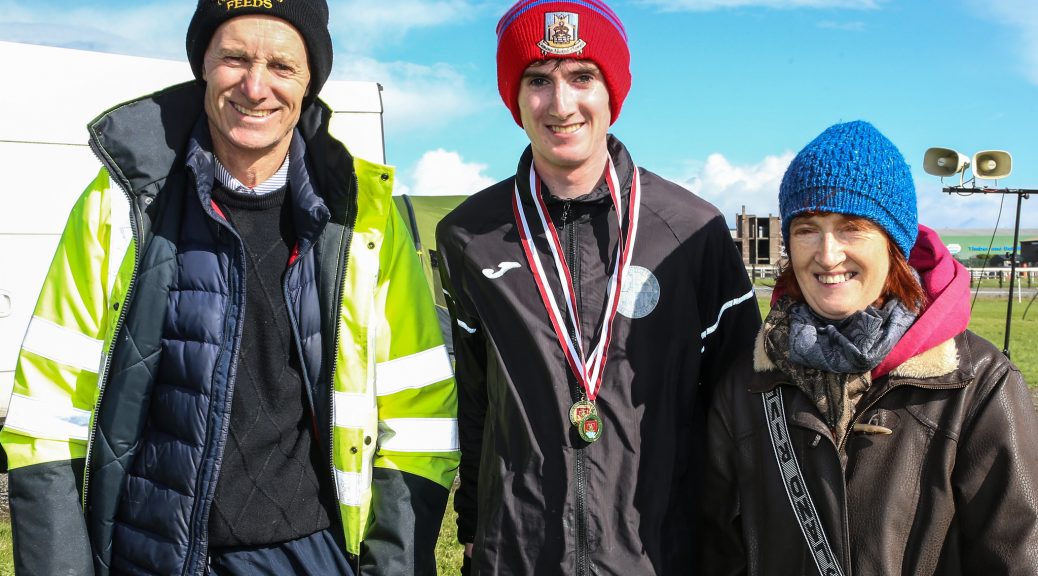 “Bring Long Spikes and be prepared for a mudbath” was my advice during the week to anyone who’d listen. A week of persistent rain raised the famous Turlough in Craughwell to full bloom and I couldn’t see it being any other way. I couldn’t have been more wrong! The course defied the bad weather to an amazing degree – with just a single soft spot in the corner and basically no mud – kudos to the drainage experts in Galway racecourse! This year the running order was reversed – from oldest to youngest and on balance, I think it worked out quite well.

William Fitzgerald has been in great form all year, and had set his mind on challenging for a precious Galway Senior Cross Country title. Normally a slow starter, he went to the front early and turned the screw on a strong lead group gradually. I confess I was a little nervous that he was doing too much of the early work but as the laps went by he continued to dial up the heat and the result never looked in doubt – pulling a clear 30-40 seconds by the end from the strong field. Definitely one of the youngest ever winners and I think the 3rd from the club to win a Galway Senior XC title after Peter O’Sullivan and Jason Broderick (Gerry Ryan has several titles from his days before Craughwell AC). Congrats to William on an historic win – he works hard and deserves everything he gets!

As is often the case in such an honest race, the front of the field got very spread out. Sean Cotter found himself in a good battle with Abas for second, but as the laps went past, the tenacious Castlegar man stole a few seconds on Sean and try as he might, he couldn’t claw it back. Sean finished in 3rd overall and 1st Junior – a fine run from the NUIG Student who is getting fitter every week.

Kyle Moorhead was in a battle with classy David Carter in the early stages, but knew he had to ease back a bit to make the 8km, which is a very long way for a Junior (their Nationals is at 6km). As he eased up, he got stranded in no-man’s land in 6th with a huge gap behind and too tough a target to chase up front so it was a bit of a lonely race for Kyle in 6th but he closed it out well to win 2nd Junior.

Our 4th man was Piotr Prokop – a last-minute sign-up who answered the call and decided to forgo his Galway bay Half entry on Saturday to run the XC instead. Piotr started towards the back of the field and built steadily and strongly all the way through. I’ve rarely seen someone pick off so many runners in an 8km cross country race – moving from 26th to 13th over the last three laps. His run was good enough to seal team Gold for the club in a close battle with host club Castlegar. Galway XC titles are always hard won and it’s great to get another one!

Mixed in with the Senior men 8km were the u18 boys 6km, where Brían O’Culainn made a smashing debut by winning Silver with a very strong run. Brian went out very hard and though he felt it over the last 2km but can be very happy with his result – he will be a strong addition to the teams over the coming season!

In the Senior Women’s race, a youthful Craughwell ladies team consisting entirely of U18 runners won Bronze in the Senior women’s teams behind two experienced GCH Senior teams. The girls were given the choice of u18 Gold or Senior Bronze and they went with the Senior Bronze. Emily Miskella won Silver in the u18 girls, closely followed by Anna Cotter who won Bronze, Aoibhe Carr (4th) and Grainne Tuohy (5th), with honorary Wolfpack member Helena O’Keefe of Loughrea AC in between. Absolutely brilliant running from all!

Declan O’Connell put on a show in the u14 boys 3km, driving on from the 2nd lap to win convincingly after a smartly cautious first km. Declan was closely followed by Stevie Ruane in 3rd, Stevie Joyce in 4th and Keelan Moorhead in 11th, to seal a solid team Gold for Craughwell in a very high standard race.

In the u14 girls, Craughwell had just two competitors and Claudia Coyle had a fantastic race to finish in 4th.  Claudia was hugely impressive in a highly talented age group, driving to the front at the start and only slipping a couple of places. Amelie Bocquet was 18th in a strong field.

Alan Hallinan had a storming run in the u12 Boys race to win impressively.  David Frazer just missed the podium in 4th, followed by Alan Warde and Oisin O’Donovan in 7th and 8th in hugely impressive performances to seal a team Gold.  Zach Keane (19th), Charlie Daniels (21), Lincoln King (31), Rhys Whelan (32) and Thibault Nicol rounded out the strong team.

Aisling Lavan had a cracking run in the u12 girls race, finishing 13th out of the 32 competitors.

The under 10 boys race was the race of the day with Conor Mannion, running out of age, leading from the gun.  He got hauled in by a GCH athlete in the last 200m and a huge battle for the line ensued in which the lead changed a number of times. At the line it was impossible to separate them so after various photo-finishes were studied, both were awarded the joint Gold!  It is the first time Iain has had to use the technology in a cross country race!

Many thanks to the Maestro John S.O’Connor for the great pictures on Sunday, some I used above. His full set of fabulous photos are on flickr 77edenhill.