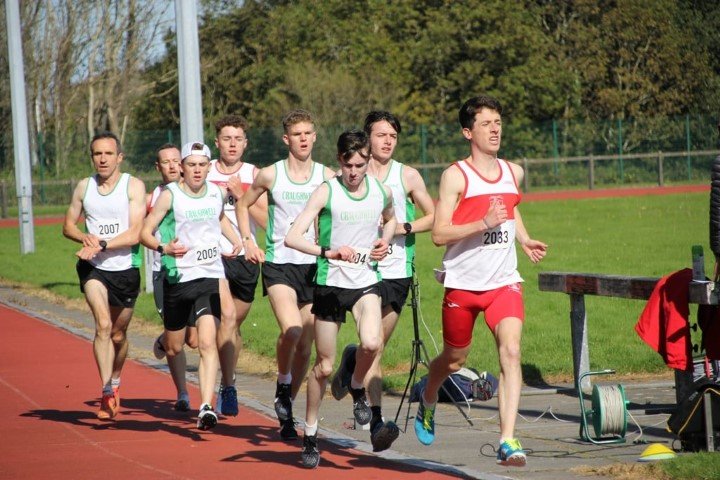 The Galway Country board were determined to have some a Galway Track & Field Competition in pandemic-struck 2020 and gambled on the Irish Weather being somewhat favourable at the end of September.  The weather was glorious for track – sunny and cold but not too cold, with just the right amount of breeze.  The track competition consisted of 400m, 800m, mile and 5000m events they were ferociously contested.  Craughwell AC had an outstanding day with a large contingent of competitors, and all performed fantastically.  Also this weekend – on Friday a brave gang of four lads headed to the wilds of Clare to run a Cross Country and performed exceptionally!

Star of the show was definitely William Fitzgerald who won a stacked 5000m with an incredible 36 second personal best.  Along with William, Sean Cotter, Kyle Moorehead, Ross McGuinness and Mark Davis competed in the green and white. The race started out at a decent clip with most of the leading bunch together – apart from National u23 Bronze Medallist David Carter of GCH who speared off alone at a ferocious pace – rightly so as he came into the race with the best personal best of a fine 15:31. William prefers to ease into a race and settled into the lead of the chasing pack.

William checks if it’s time to hit the turbo

At 3000m, William made his move closely followed by Sean – picking up the pace noticeably to reel in Carter – as they caught up, William continued on as Sean tried to tuck in.  (At least that’s what I think happened – at this stage it was getting pretty hard for me to see from my vanishing vantage point 😀).  William got stronger lap after lap to finish with a brilliant 15.21.  He finished feeling like there was more in the tank which is exactly how it looked!!

William makes the decisive move and never looked back!

Next home was the Carter in 15.31 and then Sean Cotter 3rd in a fantastic new PB of 15.46.  Sean literally ran in his dad’s old trainers so there is definitely more in him!  Next home for Craughwell and in 5th overall (first Masters) was Mark Davis in 16.21 followed by Ross McGuinness in 16.52.  Ross led me through 3km in 9.35 (which is exactly 16 minute pace) but then the wheels came off a little for both of us – especially Ross.  It was a fine run from the young lad and he will go from strength to strength!  Kyle was one of the favourites and went with the early pace but ran into trouble and had to pull up about half way – it happens, we know what’s needed – easily sorted!!. 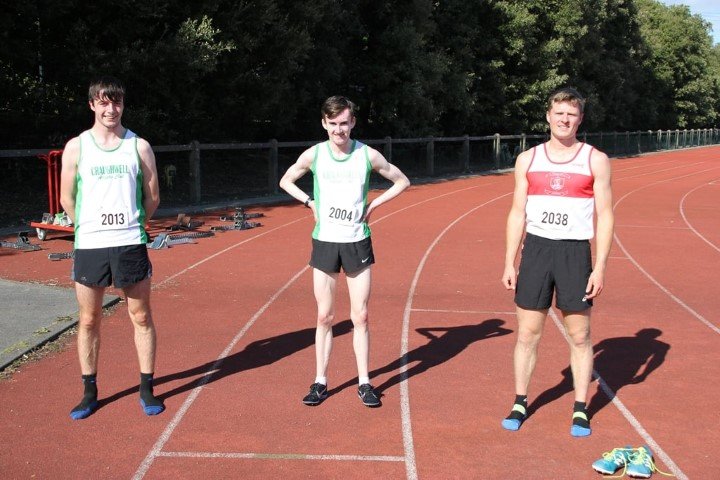 Emily Caps off the season with 800m Win 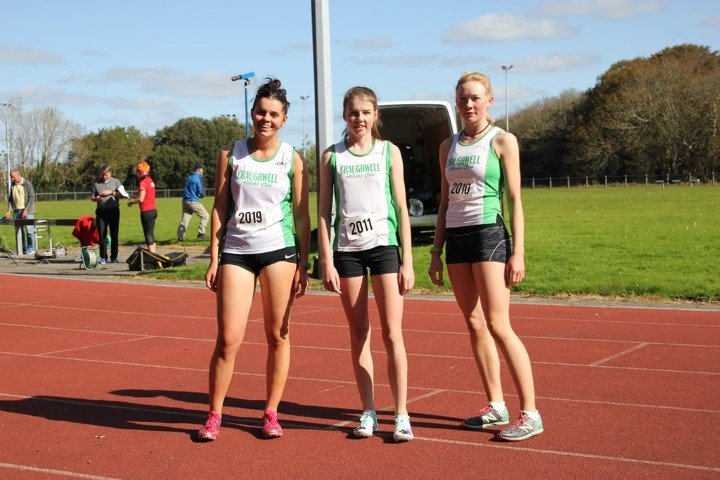 Emily Miskella won the girls 800m in dominant fashion with a 2.22 finishing time, a four second personal best.  This was even more impressive as her legs couldn’t have been that fresh!  On Thursday night Emily found out she had a Camogie match on the same time as the race so she pulled out of the event and she joined into a hard cross country workout on Friday evening.  When she got back from training she found the match was cancelled so we decided to run the event anyhow as it was the last one.  To blitz out an 800m personal best the day after a hard training session shows great conditioning and mental strength.  She was just 0.3s off the club junior 800m record of 2.22.60 which was set by Linda Porter in 2008. In the race itself, Emily took it from the gun and ran the first lap way too fast but held on well for a fantastic time.

Saoirse Moore was next home for Craughwell in 3rd place and she was gaining all the way with a tremendous second lap to finish in 2.34.  Saoirse is relatively inexperienced at track racing but this was the most comfortable 800m she ever had which is a great sign.  Next home for Craughwell in 4th place was Grainne McDaid who is chopping the seconds off with each of her comeback races and ran a fine season’s best of 2.52.

One-two from Oisin and Gavin in fantastic 800m tussle

The 800m was set up to be a great race with no less than 5 contestants who were capable and hoping to run under the magic two minutes.  Oisin Davis had a game plan to go out hard and see what happened – not very original but effective!.  He was a little quick to 200m but settled and led them through the first lap in an ideal 58.5s with the 4 of Gavin Cooney, Neil Keane and Shane Moran stacked up behind looking to pounce.  Gavin made his move and pushed on at 500m to take the lead and a gap developed with Neil very close behind, all on for sub-2. 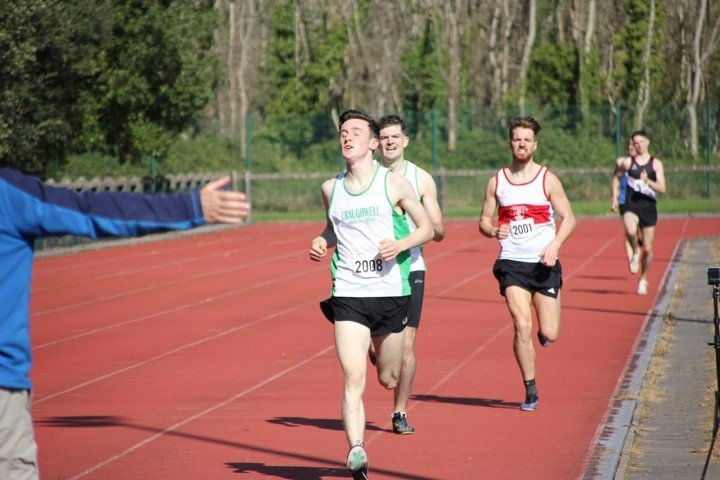 Are we having fun yet?  The lads wade through the last 200m!

About 700m into the race it was as though a sniper hit all 3 front-men with some kind of lactic acid bullet and they went to jelly.  Oisin held it together somewhat and swam through the line in 2.00.63 followed by a drunken Gavin Cooney in 2.01.79 and woozy Neil Keane in 2.02.31.  Brilliant running by all the guys – the real winner was that lactic sniper who took out all 3!  Oisin now wins the coveted John Cormican trophy for the most number of 2.00.x times in a season (without going under!). 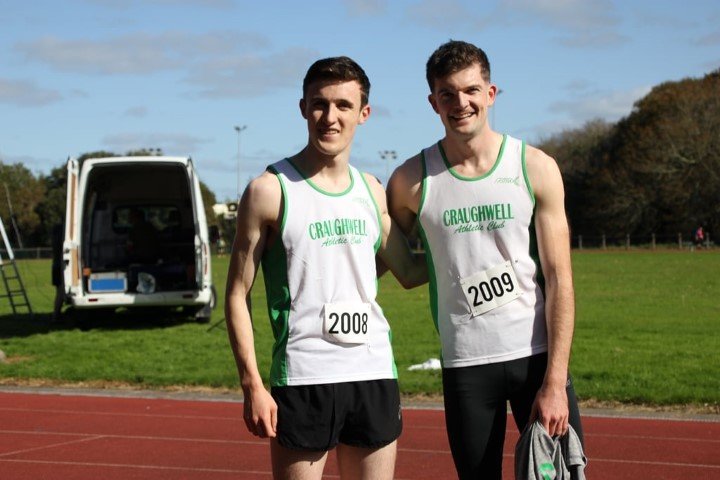 All Smiles after – Oisin Davis and Gavin Cooney, 1st and 2nd in the 800m

Luke Smashes his PB in the Mile

Luke Burke went with the pace in the Mile race and a pretty ferocious pace it was, smashing the first lap in under 65s.  He settled back to a more manageable pace for the next three and smashed 5 minutes for the first time, with a fine time of 4.57, beating my prediction by 10 seconds!  Noel Gorman also raced for Craughwell in this race and he had a target of 6 minutes on his mind.  Noel was hit by the lactic acid gods in the last lap but held on mightily to get his target by the slimmest of margins: 5.59.69. 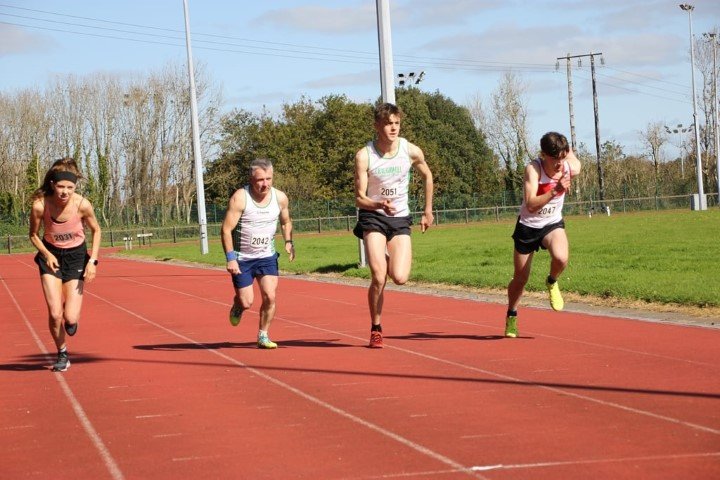 The mixed Mile race gets off to a start

Brian Malone had one goal today on the 400m – to smash the magical 60s barrier. He certainly achieved that with a fine time of 58s in a strong run with even pace all the way. There are many more improvements to come from Ronnies protege! 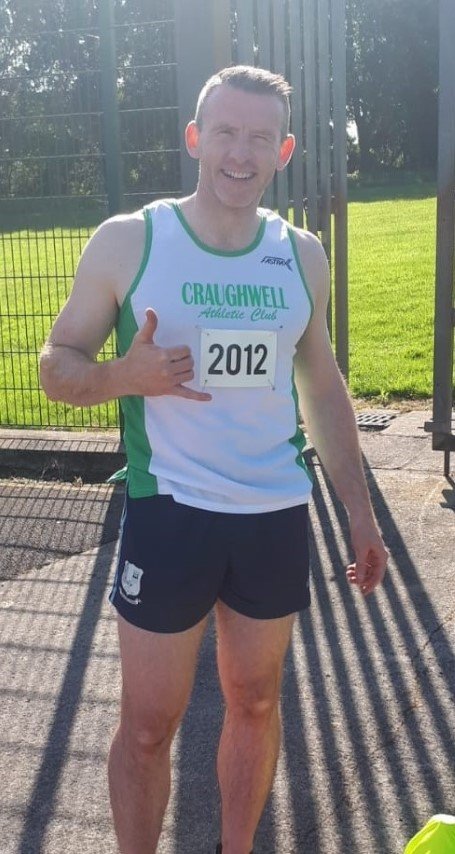 Gone in 60-seconds – Brian delighted with smashing the barrier!

Arlene Earls ran an excellent season’s best o 63.67 to finish second in the Womens 400m.  Arlene got off to a very strong start and was gaining in the early stages but couldn’t quite manage to bridge the gap on double European Silver medalist Annette Quaid over the last 200m.  A fine performance all the same and a nice end to 2020. 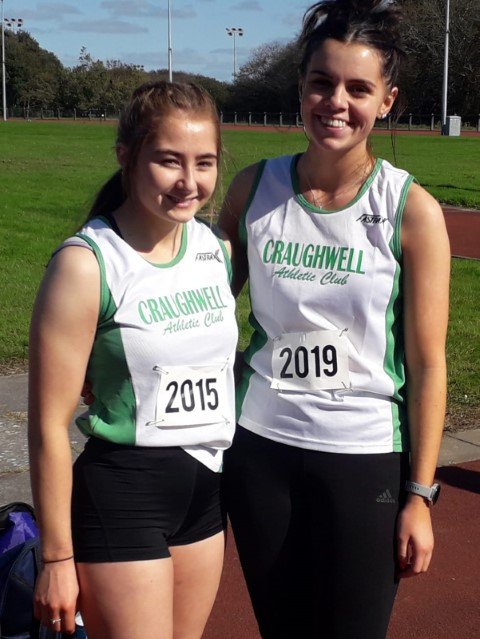 Arlene and Grainne all Smiles!

On Friday evening Ronnie took his A-Team of cross country nuts to Clare and the four lads delivered unbelievable performances on the course which was just over 2km long.  First home on the day and in 4th overall in the high standard race with another breakthrough run was Declan O’Connell who continues to grow physically and aerobically with a fantastic 7.05.   Declan was closely followed by Keelan Moorehead and Stephen Ruane in 8th and 9th positions and young Alan Warde in 16th in the large field.  Brilliant running all!

Gang of Four give it all in West Clare!