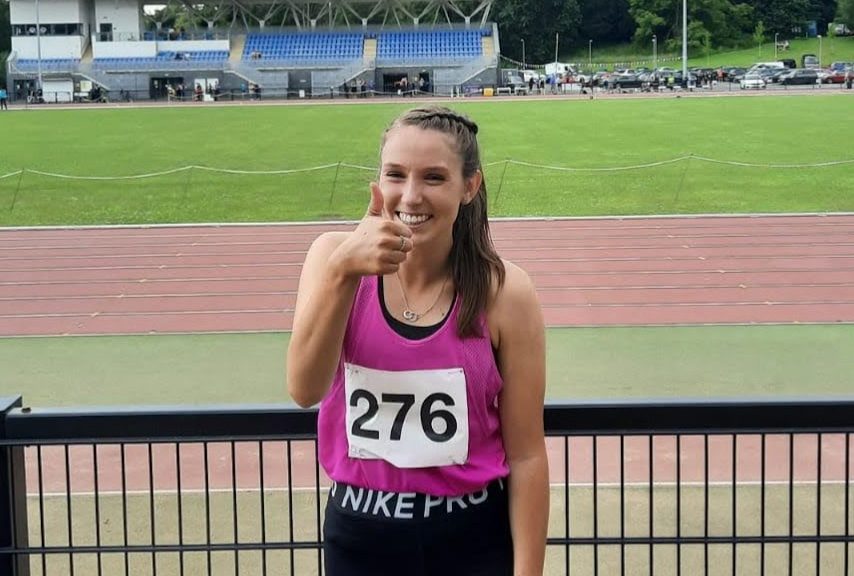 Another busy weekend of Athletics began on Saturday as a large contingent of Craughwell AC Junior/Senior Middle Distance Athletes compete at a high quality meet in Belfast while the u9-11 Connacht Children’s Games took place in AIT on Saturday to great success.  On Sunday it was the turn of the u16-u19 athletes to compete in Dangan as the last competition before the Connachts next week.

Eight Craughwell AC Middle Distance athletes made the 4 hour trek to Belfast on Saturday to compete at the Afternoon of 800s and 1500s fantastically hosted by North Belfast Harriers AC and it was well worth the trip! Nestled in a natural amphitheater, the Mary Peters track has rightly gained the reputation as the best and fastest track in Ireland.

Highlight of the weekend was another massive new club 800m record of 2.16.50 by Sinead Gaffney, knocking a whopping 2.03 seconds off her old mark of two weeks ago. You could visibly see the difference in Sinead’s running following the breaking of 2:20 two weeks prior. She ran relaxed and confident throughout, right at the front to hit the bell at 67 and finish with a 69s final lap. She was already half recovered by the time her old nemesis “2.20” rolled around on the clock – great progress!!

Jack Miskella had another excellent run in an incredible “A” race of 3.56.  You could throw a blanket over the next four of Sean Cotter (4.03.46), Kyle Moorehead (4.04.34), Oisin Davis (4.04.37) and Paddy Noonan (4.04.40). Serious running also from Gavin Cooney with a 2.02 Season’s best, and Emily Miskella (2.29) rounded out a day to remember for the village club! We would like to extend our deepest appreciation to host club North Belfast Harriers for being such exceptional hosts and enabling our athletes to have the opportunity to compete.

Meanwhile in Athlone, the Connacht Children’s games allow these younger athletes to get their first tastes of competition in teams of two.

Craughwell’s u9 boys 60m athletes won first place with Conor Mannion and Jack Hibbit blazing their way into first place, each winning their heats. Conor and Jack made it double-gold in the 300m with two rapid times to lead the 12 teams home, almost three seconds clear of second place. Teammates Dean O’Halloran and Matthew Drysdale blazed home in 8th place.

Realtin Ward and Ruby Maher came a brilliant first in their U10 girls 60m sprint.  In the 300m, Laoise Coleran and Ruby Maher came home in 9th place. In the long-jump, Bethann Beattie and Laoise Colleran came 4th while teammates Lola Whitney-Mangan and Cerys Johnston came 5th with only 10cm separating the teams.

Lola and Laoise also had the 1st and 2nd place individual long jump and the U10 girls relay took the Connacht gold with their team of Lola, Realtainn, Laoise and Ruby.

In the 60m event Sean Colleran and Lincoln King won the Connacht Silver medal.   In the 600m James Niland and Donal Coyle came 4th and Sean Colleran and Darragh O’Donnell finished in 9th place.   Ruairi McNena individually came 3rd in the long jump with an exceptional 3.45.

Darragh O’Donnell, James Niland, Sean Colleran and Lincoln King came 2nd in the relay. They are a super team and had a strong finish winning their heat and overall winning the Connacht Silver medal.

On Sunday it was the turn of the U16-u19s to compete in the Galway T&F, an event which was postponed from a couple of weeks ago in the interests of public health.  Perhaps due to the rescheduling, the turnout was small, but the standard was nonetheless very high and all the Craughwell athletes performed excellently. I hope and expect to see a much stronger turnout next weekend for the mandatory Connacht Qualifiers for the all-Irelands.

Holly O’Boyle came 4th in her first ever 1500m in a fine 5.46.35.  Holly went out a little too hard but managed to hold it together well to give herself a fine time to chase in the Connachts next week.  Holly Shaughnessy cleared 1.20 in the U16 High Jump to take Silver and also came 6th in the Walk with a time of 13.54 for the 2km and came a fine 3.95 for 5th in the Long Jump. Adara Salvo came first in the U16 Triple Jump with a clearance of 6.51.

After winning the High Jump with a fine 1.50 clearance, Jade Moorehead came 4th in the 200m with a strong 28.17.  It was a high-jump clean sweep once again for Craughwell as Siofra Davis came 2nd in the high jump with 1.45 followed by Leonore Church in 3th with 1.40 and Erin Kelly in 4th with 1.35.  Siofra Davis added a Silver in the 100mh and a Bronze in the 300mh to her haul for the day.  Leonore Church came 4th in her first ever 300mh with a fine time of 55.20.  Erin Kelly came second in the long jump while Leonore Church came 3rd.

Erin Kelly won the triple Jump with a fine 9.43 personal best while Aoibha Fahy came 3rd with a strong 8.09. Aoibhe also came 2nd in the Javelin with a throw of 26.58m.