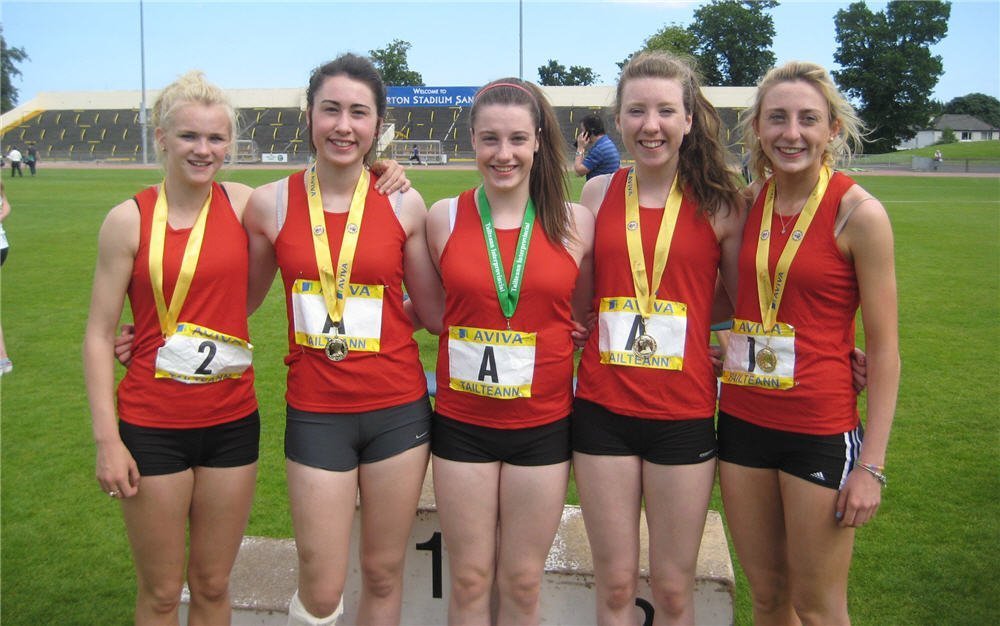 On a busy busy weekend for athletics, Craughwell AC athletes were in action across the country and across Europe as far as Estonia. On Saturday in Santry, athletes from the club made a huge contribution to one of the best ever days for Connacht athletics at the inter-provincial schools track and field known as the Tailteann Games. Just 2 years ago, Sineád Gaffney had the honour of helping Connacht to win its first ever relay gold medal at the 2012 Tailteann Games when running the 3rd leg of the 4x300m in an historic victory for Connacht – its first time in over 50 years of competition to win a gold medal at these Games.

Well last Saturday in Santry, the club made an even bigger contribution to a repeat performance in the 4x300m with both Tara McNally and Sineád Treacy running on the 4x300m team who took Connacht’s second ever gold relay medal at these Games in a time of 2.43.20. Tara and Sineád joined Laura Anne Costello and Mayo’s Aisling Forkan as the triumphant quartet. Just moments earlier, another Craughwell AC athlete Michelle Duggan partnered Sineád, Laura Ann and Aisling to silver in the 4x100m with 47.81s!

And even more impressively, the 4x300m team set a new Tailteann Games record of 2.43.2 while the 4x100m eqalled the previous Tailteann record (new record is 47.16 set by Leinster on Saturday).

It was a remarkable set of performances and one the club is very proud off. Special mention to Swinford’s Aisling Forkan who was a member of the 2012 4x300m team who won gold and was part of both medal winning relay teams last Saturday as well as winning 2 individual gold medals on Saturday in the long jump and 300m and in the process breaking the Tailteann 300m record!

It was a special day also for Sineád Treacy who took a splendid individual silver medal in the 200m in a time of 25.05 having earlier placed 6th in the 100m in 12.23. Sineád was well back in the 200m as it entered its final 50m but put in a big surge over the last 50m to take the silver medal. Tara McNally came close to the medals in a super 300m hurdles where she took 4th place in a time of 47.12.

There were several other strong performances from several athletes many of whom were representing Connacht for the first time. Caron Ryan took 9th place in the 3000m in a time of 12.03.28; Aisling Keady placed 10th in both the long jump (4.62) and high jump (1.45); Aidan Conneely placed 8th in the 100m with 11.75s; Matthew McKernan placed 8th in the long jump with 5.63m and 6th in the triple jump with a fine 11.97m; Ciara Greene placed 8th in the 1500m with a strong 5.14.39 while Dearbhaile Walshe was just marginally behind in 9th with 5.18.86, great performances from both girls.

Full results of the Tailteann Games are here.

Meanwhile in Tailinn (Estonia), Cathriona Farrell was representing Ireland in the high jump at the European Team Cup in Tailinn. The team travelled over on Wednesday and Cathriona was in action on Sunday where she placed 11th with a jump of 1.70m to earn 2 points for the Irish team. The Irish team placed 7th overall which matched its best ever finish in this event from last year. Cathriona’s best jump was a little down on her recent outdoor best of 1.80m set 4 weeks ago at the AAI Games, but nevertheless it was fantastic for her to be back in her first international in 5 years, great experience for her at this level. Cathriona’s recent PB would have taken 3rd place in the event, so certainly it’s well within her to be battling it out with Europe’s top jumpers. Full results of the team are here. 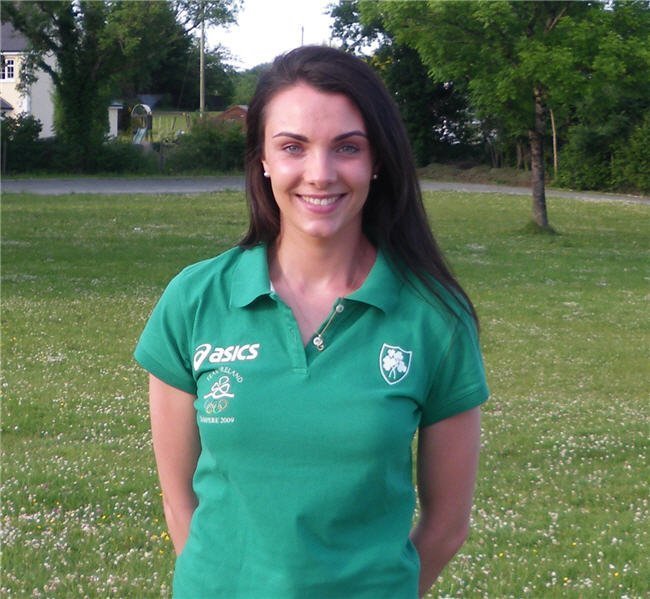 And to round off one of the busiest weekends of the year for the club, our U9-11s stars were in action in the National Track & Field finals in Tullamore. With 27 pairs having qualified from the Connacht finals, the club had the largest contingent in action of all clubs where they featured on the medal podium an incredible 7 times in addition to a few 4th places – easily the club’s best ever performances in the younger age groups at National level. Only 2 other clubs featured on the podium 7 times – Bandon and Finn Valley. There were 90 podium places up for grabs altogether so to feature 7 times at National level is an impressive statistic!

There was some confusion with the results initially as where we had multiple teams in an event, officials mistakenly paired them alphabetically when scoring the pairs rather than pairing them as entered in accordance with how they qualified from Connacht. If any other club has concerns here, they can refer to the Connacht results.

On a day of many great performances, our U9s were particularly impressive and one of the most impressive of all was the U9 girls’ long jump where we had two teams in action with both finishing in the top 4 teams. Grace Lynch and Chloe Hallinan were paired together and leaped to a combined 6.06m to claim the silver medals (just 2cm short of gold!) with Siobhan Carr and Isabella Boland combining to take 4th place with 6.75m.

Evan Moran and Conor Gilligan had an incredible series of jumps to leap a combined 6.64m to take the gold medal by a whisker with just 1cm separating them from the silver medallists. Cormac McFadden and Lucas Keane combined to leap 5.60m for 12th place. Evan Moran continued an outstanding day to combine with Mikey Fallon in the 300m to take the silver medals in a combined time of 1:49.35, an event where Cormac McFadden and Liam O’Connell placed 7th in 1:57.75. Evan’s performances in both the long jump and 300m place him at the top of our age group records in both events – a fantastic achievement. Mikey Fallon and Conor Gilligan almost nailed another pair of medals when placing 4th in the 60m in a combined 21.22s, just six-hundredths of a second off a medal. Rachel O’Callaghan and Aoibhe Donnellan had a super run in the girls’ 60m to place 7th in a combined 21.38s.

In the turbo javelin, Grace Cunningham and Eabha Neary went close to the medals with a 5th place finish with a combined 15.49 while Grace Lynch and Jenny Cloonan were not far behind with 13.52 in 6th place and Rachel O’Callaghan and Niamh O’Connor 10th with 11.61. In the boys’ turbo javelin, Cormac Regan and Callum Brady took 9th with a combined 21.26 while Ben Trehy and Adam Jordan took 12th with 15.06. The U9s capped a memorable day with fantastic bronze medals in both the girls and boys relays. The boys’ team were Evan Moran, Mikey Fallon, Cormac McFadden and Conor Gilligan while the girls were Chloe Hallinan, Grace Lynch, Siobhan Carr, Aoibhe Donnellan and Rachel O’Callaghan. The times for both teams were very impressive, breaking the club’s age group records for both boys and girls. The boys time of 1.06.42 from their heats beat the previous best of 1.08.01 set in 2008 by the then U9 team of Peter Martyn, Conor Callaghan, Micheál McFadden and Alan Callanan while the girls time of 1.07.70 knocked an incredible 3.4 seconds off the previous best of 1.11.1 also set in 2008 by Rachel Hannify, Ciana Reidy, Aoife Raftery and Laura Cunningham.

In the U10 grade, the stars of the day were Cian Lavan and Evan Hallinan who leaped a combined 7.14m to take the bronze medals. Evan also partnered with Luke Flynn in the 500m where they battled bravely to take 7th place in a combined time of 3:18.49, knocking over 6 seconds off their Connacht times with Luke improving by 4.5 seconds to run 1.40.59 and Evan knocking over 1.5 seconds off his time to run 1.37.90, placing them 2nd and 3rd on the club’s all-time lists for this age group. In the turbo javelin Cormac Conneely and Aaron Flynn placed 11th with Cormac throwing 11.54m and Aaron unlucky not to record a valid effort. In the girls’ turbo, Megan Gilligan and Sadhbh Irwin had a big performance to place 5th with a combined 21.54 while Aoibhe Farragher and Millie Geraghty were close behind in 10th place with a combined 19.28. Sarah Byrne and Josie Fallon jumped well to take 10th place in the long jump with a combined 6.02m while Jade Moorhead and Aoibhe Carr battled hard to take 12th place in the 500m in a combined time of 3:38.80. In the relays, the U10 boys’ team ran well to take 5th place in the final, missing out on the medals by only 3 or 4 metres. 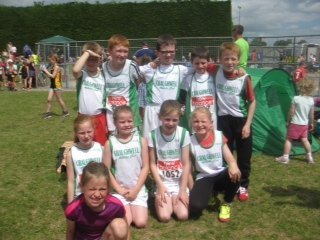 Craughwell AC U10 Squad at the National Championships in Tullamore

There were further fine performances in the U11 grade where Rebecca Lynch and Regina Maduka led the way with a fine bronze medal in the turbo javelin with a combined 31.14m. The long jump pairs of Emily Miskella/Rebecca Lynch and Rebekah Flynn/Caoimhe Connolly placed 7th and 8th with combined totals of 6.48m and 6.41m. In the 600m, Rebekah Flynn and Emily Miskella battled hard to take 7th place with a time of 4:06.06. The U11 boys also performed impressively with Liam Mulveen and Liam McDonagh leaping a combined 7.44m to take 5th place in the long jump and Niall Cummins and Lukas Schukat close behind with 7.32m to take 7th place. The turbo javelin pair of Liam McDonagh and Robert Urquhart took a respectable 6th place with a total of 38.96m. The U11 boys team of Conor Hoade, Robert Urquhart, Liam Mulveen, Lukas Schukat and Kieran O’Connor ran well in their heat to record a time of 61.59s. An unfortunate mix-up led them to being called for the final only to be ushered off by officials as their time had not qualified them.

So at the end of an eventful day of ups and downs for different pairs and teams, overall it was a very successful day for the club – one of its best ever and hopefully all of our participants can come away from the day feeling good about themselves. Making it as far as the National finals is a fantastic achievement and each of our athletes should be very proud. Winning National medals is an even more unique achievement and one that athletes and coaches should treasure as it’s not something that happens every year for the same athletes. Our athletes who were hoping for and missed out on medals should be equally proud as they made it to the National finals and their day will come in the years ahead to enjoy plenty of success.

Full results are on the Athletics Ireland website at http://www.athleticsireland.ie/juvenile/results/.