Over 120 athletes from the club embarked on the annual pilgrimage to Nenagh for the 2013 Galway Indoors. With the date a month later than normal, it was a much warmer experience in Nenagh that the icy early January fixture of previous years. Participation was up very significantly in the younger ages as a result but unfortunately was down significantly in the older ages and seniors due to clashes with mock junior/leaving certificate exams, the Universities track & field and the National Masters cross country. Amidst much tougher competition than last year, the club had another bumper day when taking almost one-third of the podium places.

Our numbers in the older ages were decimated due to the clashes with exams and the universities. Last year we were able to field 2 strong 4×200 senior women’s teams while this year we did not have any. But not to worry, we will be back! Conor Duggan and Claire Ryder led the way for the club with some exceptional sprint times. While timing was hand-timed and varying in accuracy in each race, nevertheless even allowing for a half-second variation, both Conor and Claire’s 60m times were superb with Conor winning the U17 60m in a time of 6.97 and Claire taking silver in the Senior 60m in 7.03 (a new National senior record! But even if you add a second for timing inaccuracy, it’s still a fantastic time by both athletes).

Claire followed up her impressive 60m with a good 200m to take the silver medal and added further silver in the long jump with a good early season jump of 4.78 coupled with 2 breaks. Maireád McCan also struggled with her mark when winning the same long jump but recorded a solid 4.97m in her final jump to take the Galway title. Diarmuid Prendergast placed 3rdin the senior men’s long jump with 4.62m and won the shot putt with an Impressive 11 metre throw. Matthew McKernan placed 4th in the U17 long jump with a PB of 4.85m. 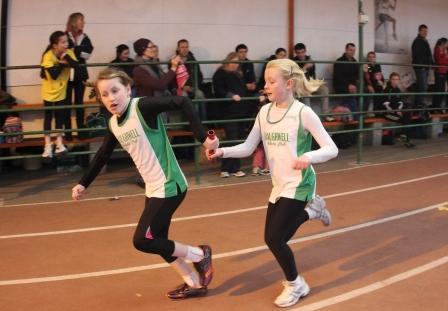 In the distance races, a close battle in the senior 800m saw Paul Joyce take victory from John Cormican with Paul posting a time of 2.07.6 and John 2.08.9. Conor Gillen and Neil Greaney took 3rd and 4th in the same race in times of 2.10.2 and 2.16.0, both showing the after effects of a fast 3000m ran earlier on the track. Conor took silver in that race in 9.43.9 and Neil took bronze in 9.45.1. Conor was just 2 seconds behind GCH’s Niall Cunningham who actually teaches Conor in Athenry VS and ran a superb race in Nenagh. Unconfirmed rumors are that Conor was going to get detention for a week if he won! Grainne McDaid made a very successful return to the track when posting a time of 2.36.0 in the U17 800m – an unconfirmed PB for Grainne. Leanne Freaney ran into lactic hell in the same race when racing a strong first 600m but then accumulated lactic kicked in and Leanne finished in a time of 3.04.1.

Michelle Duggan was the star of the U15 girl’s age group on this occasion with an exceptional 9.52 to take the Galway title and added a silver in the 60m in a time of 8.69. Eimear Loughnane made the final of the sprint with 9.39 in the semi, but I don’t have a final time for her as only the top 3 times were recorded. For good measure, Michelle broke 4m for the first time in the long jump when leaping 4.05m to take the silver. Aoife Greene placed 4th with a leap of 3.60m in her first time taking part in the long jump and took the high jump title with 1.30m also in her first time in that event – great debut in these events for Aoife. Eimear, Michelle and Aoife combined with Erin Fitzpatrick to take the bronze medals in the 4x200m in a time of 2.04.7. Returning from injury, Aisling Keady-Cummins was under physio and coach orders not to take part in the jumping events this time out and had to make do with perhaps not her favorite event in the shot putt where she threw 5.57m to take bronze. As its one of the events in the pentathlon, it’s a good opportunity for Aisling to make a lot of progress in this event when gradually returning to action in her preferred high jump and long jump events.

The club had a lot of athletes in action in the U14 age group with 9 girls and 3 boys competing. In the girls long jump, Aoife Walsh broke the 4m mark for the first time with a 4.01m leap to take silver while Ciana Reidy made the long jump podium for the first time when leaping an impressive 3.91m to take bronze. Incredibly the club had 5 of the top 7 athletes in this event out of the 18 competitors. Details of the performances were:

The girls went onto take 1-4 in the high jump where Lorraine Delaney made an incredibly impressive debut with a 1.35m leap to take the Galway title and might have gone higher were it not for landing on the bar on her first attempt at 1.40m. Aoife Walsh took silver with 1.30m, unlucky not to have gone higher.

Lorraine also had a good run in the sprint semi final, running 8.51 to qualify for the final. Caoilin captured the bronze medal in the 60m hurdles with a strong run of 10.15 and Sineád Kennedy placed 5th in the 800m in 2.59.2. In the shot putt, the girls also made a major impact with Shauna Tobin taking the silver medal with a strong PB of 6.85m, Laura Cunningham on her way back from injury taking silver with 6.11 and Eibhlin NicCormaic placing 4th with 5.62 in her first time competing.  The girls wrapped up their day with 4th and 5th place in the 4x200m with Caoilin, Ciana, Aoife and Laura combined to place 4th in 2.08.4 and Sineád, Lorraine, Lisa and Shauna placing 5th in 2.17.3.

In the boys events, Cian Waters had a very successful day with gold in the shot putt with a throw of 9.61m and gold in the 60m hurdles in 9.83, just fractionally ahead of Jerry Keary who took silver in 9.84. Hugh Mulryan placed 3rd in the hurdles with 11.88 and 5th in the 800m with 3.03.8. Cian followed up with a silver medal in the 60m sprint in 8.03 while Jerry added double gold in the long jump and high jump with 4.16m and 1.40m. The boys wrapped up a very successful day with a convincing victory in the 4x200m in a time of 2.06.7 ably assisted by Micheál McFadden who stepped up an age.

Moving onto our U13 age group, the club continued its impressive performances in the long jump when taking 7 of the top 9 places in the girls events and all of the top 4. Siona Lawless took the Galway title with a leap of 3.59m with Caoimhe Allen and Tara Slattery hot on her heels:-

Tara and Caoimhe reversed positions in the high jump with Tara taking gold with a fine jump of 1.25m and Caoimhe in 2nd with 1.20 and Clare Treacy taking bronze in 1.10. Sarah Callanan took silver in the shot putt, with strong throws also from the other girls in this age group:

The success story continued for the U13 girls with 5 of the girls making the hurdles final and Alison Leahy taking the Galway title in 10.81 with Roisin Hansbury in close attendance to take silver in 11.01. Rachael Hughes, Tara Slattery and Siona Lawless all made the final with times of 11.99, 12.55 and 13.53 from their semi-final.  Alison, Siona and Roisin also made the sprint final with times of 8.90, 9.40 and 9.80 from the semifinals. What was even more impressive for the girls was the spread of medals amongst the different athletes with no less than 7 girls winning individual medals. The girls wrapped up an outstanding day with silver medals in the relay from Alison, Roisin, Tara and Siona in a time of 1.03.2 while Caoimhe, Sarah, Emma and Rachael combined to place 4th in 1.05.9 and  Fiona, Saoirse (Farrell), Saoirse (Kelly) and Shiona placed 6th in 1.12.9

The U13 boys were equally impressive with 6 of the top 8 places in the long jump, led by Micheál McFadden with a fine leap of 3.90m to clinch the silver medal with Conor Hughes in the bronze slot:

In the U12 grade, the medals continued to flow with many more impressive performances across the full spectrum of events. In the jumps, yet again the club dominated with Eva Kelly taking silver in the long jump with 3.32m and gold in the high jump with 1.10m. In fact, it was a tightly contested high jump with Sarah McCartin and Ruth Dillon also clearing 1.10m and taking 2nd and 3rd place on count-back. Kirby Dooley and Jennifer Hughes almost made it to the same height having cleared 1.10.  Full details of the long jump performances were as follows:-

The U12 boys also had a great set of performances with Alex Evans leading the way with gold in the 60m sprint in a fine time of 7.88. It was a good day for Alex with silver in the long jump also with a leap of 3.85. Ryan Gallagher placed 4th in the long jump with 3.57 and made the sprint final with 9.78. Full details of long jumps are as follows:

The long jumps were trumped by a fantastic 1-2-3 in the high jump where Cian Garman put in a mighty series of jumps to win the Galway title in 1.15 with Ryan Gallagher in 2nd with 1.10 and Alex Evans in 3rd with 1.05 – Alex’s third individual medal of the championships. The U12 boys also had a very impressive performance in the 600m with Finbar McFadden taking the Galway title with 1.58.2 in heat 2 and Sean Cannon taking bronze having won the other heat in 2.02.1. David Lee placed and Eoin Lyons placed 3rd and 4th in heat 2 in times of 2.05.4 and 2.10.3 to put them 5th and 8th overall. Lorcan Budge placed 4th in the shot putt with 4.36m while Kyle Moorhead placed 6th in the same event with 3.57m.

The U12 boys wrapped up a fine day with silver in the relay in a time of 1.04.0 with Sean Cannon, Finbarr McFadden, Ryan Gallagher and Alex Evans. Craughwell also placed 4th and 5th with Garvin Surlis, Cian Garmin, Kyle Moorhead and David Lee in 4th in 1.07.4 and Lorcan Budge, Gavin Lee, Fionn McArdle and Eoin Lyons 5th in 1.09.1.

Last but not least the U10s also had a fantastic series of performances led by Rebekah Flynn and Emily Miskella who placed 2nd and 3rd in the long jump with leaps of 3.15 and 3.08, a feat they repeated in the 350m with Rebekah 2nd in 1.11.3 and Emily 3rd in 1.12.3. Alex Slamas made the sprint final in a time of 10.95. The girls long jump results were particularly impressive with 7 of the top 9 places:-

The girls wrapped up a successful trip to Nenagh with 1st and 2nd in the relay with Rebekah Flynn, Emily Miskella, Alex Slamas and Saoirse Dooley taking the gold medal in 1.13.9 and Rebecca Lynch, Leah Farrelly, Aoife Keating and Caoimhe Connelly taking silver 1.21.1.

The U10 boys provided perhaps the most amazing numbers of athletes that the club has possibly ever assembled in Nenagh with no less 18 boys contesting the long jump with Findlay Budge taking a fantastic gold with a leap of 3.04 and Liam McDonagh in 2nd just 1cm behind.

Three of the boys made the sprint final with Conor Hoade running 9.39, Lukas Schukat 9.46 and Nigel Kelly 10.34. Darragh Kelly placed 5th in the 350m with 1.10.1 and Nigel Kelly 9th in 1.12.6. The U10 boys wrapped up their day with 4 teams taking to the track for the relay. Nigel Kelly, Liam McDonagh, Niall Cummins and Odhran Keane took the honours when placing 3rd in a time of 1.11.9; Conor Hoade, Darragh McCartin, Rian Kearney and Darragh Kiely placed 6th in 1.13.8; Kieran O’Connor, Lukas Schukat, Liam Mulveen and Robert Urquhart placed 8th in 1.14.6; and Ben Cunniffe, Dara Collins, Tiernan Leen and Noah Keane placed 10th in 1.19.9.