In one of the most exciting races I've seen for a long time, the extraordinary Gerry Ryan made it a hat-trick by winning his third title in about 24:20 just ahead of Raheny's Vinny Mulvey.  The full official results were unfortunately delayed a little due to a laptop accident (I feel for the organisers!).

"I'm delighted, I never expected that I'd see myself winning this race again.  Vinny had built up quite a lead, perhaps 60m but I managed to close it at the 6k mark and pushed home very hard for the final 2k and luckily managed to hold on. "

Craughwell were out in force as usual at this excellent race, and Gerry's was not the only great story.  Peadar Hearvey had an exceptional Streets debut, finishing in the low-26's.  The most consistently reliable runner in the club Peter O'Sullivan also posted a PB 10 seconds behind Peadar, and said that he'd never been so happy to be beaten by a teammate. 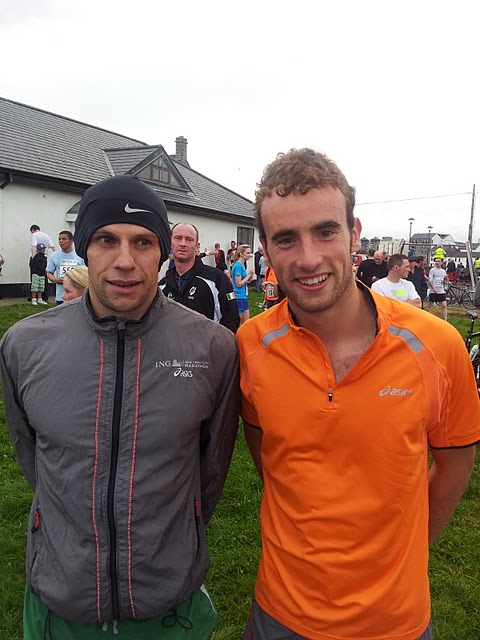 I got the order of the next few finishers mixed up but it's fair to say that the club should be well in with a shout in one of the first team 3 positions given good runs from Johnny Lane and Paul Keane (just back from his honeymoon).  I think that the most likely result will be first for Raheny, second for GCH and third for Craughwell, but we could be close.

The day belongs to Gerry, but well done to all that took part!

While we are waiting for the results, might be worth a glance at results from the previous times where Gerry took the title: