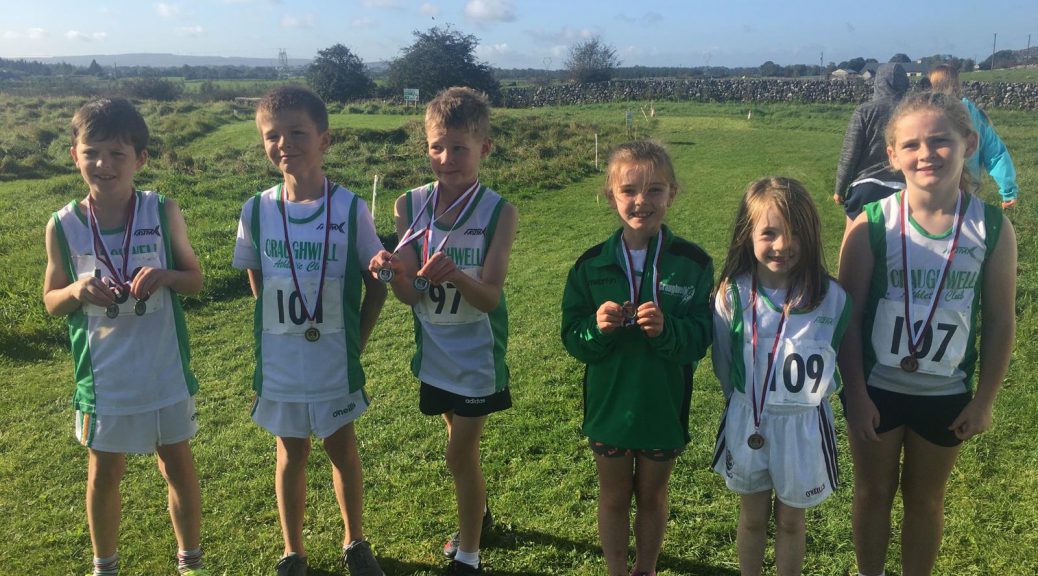 After all this talk of Ballybrit being such a great course of late (it is), Loughrea AC’s stunning facility at Bushfield came out fighting and showed once again today why it is as good a cross country course as exists anywhere. Full credit to host club Loughrea AC who put on a smashing show and the glorious weather and course combined to make it a brilliant introduction to Cross for everyone that took part.

Muireann Kelly got the day off to a storming start with a brilliant solo victory in the u9 girls event. Muireann was ably supported by teammates Naoise Quinn (16), Roise Beatty (18), Grace Glynn (22), Olivia Gorman (27), Cara Grealish (28), Emma Meehan (36), Zoe McAllen, Molly Doyle and Abbie Hall. The “A” team finished in the Bronze medal position and the “B” Team finished in 5th.

Next up for Craughwell were the u9 boys, and two young men that are getting very familiar with each other in races of late, having won a special double-gold in the nationals as a team over the Summer. Conor Mannion and Jack Hibbit had a fantastic battle with Conor taking the win on the day to get the Gold, closely followed by Jack for the silver. Dean Fahy and Dylan Burke were 12th and 13th to seal the team win with Jack Melia and Aaron Burke completing the “A” team. The “B” team also ran well with Dean O’Halloran, Aaron Burke, Gerard Murray and Sean Coughlan coming in 7th place.

Sophie Meehan had an absolute stormer in the u11 girls race to come 4th in a fantastic effort, finishing very strongly indeed. Grace Drysdale made her Cross Country debut finishing well up the field in 21st place. Faye Whelan was 23rd, Reailtin Ward 28th and Zara Kenny 32nd.

Donal Coyle was 4th man home in the U11 boys race with a powerful run, leading his teammates James Niland (6), Darragh Brown (8) and Sean Colleran (10) to Gold. Despite getting 4 in the top-10 they just took gold by the 4th man position, in a great battle with Clare River Harriers. Zach Wholihan, Sean Niland and Lincoln King finished out a very strong team.

The U13 Girls ran superbly to snatch a team Silver Medal. Aeveen Kelly ran a fantastic race to finish 2nd over all narrowly missing out on Gold. Claudia Coyle followed closely behind finishing in a fantastic 3rd. Alva Horan also ran extremely well finishing in a great 9th place Stepping up from the U12s, Layla ran a superb race finishing in 20th.

The boys, seeing the success of the girls went out and did one better. The U13 boys won a Gold medal in the team events. Stephen Joyce ran a superb race and also narrowly missed out on Gold. Alan Hallinan who stepped up an age category followed Stephen very closely securing Craughwell a 2nd and 3rd place finish. David Frazer and Oisin O’Donovan both stepped up from the U12 and both ran clever races to finish in 8th and 14th respectively which secured Craughwell the U13 Boys Team Gold medal.

Declan O’Connell stepped up in age to the U15 category and had a battle with a fine athlete from East Galway. Declan bided his time to make his move and the push just before the start of the second lap proved decisive. Declan drove for home and won the Gold medal.

Taking a break from her busy Camogie schedule, Aoibhe Carr ran strongly all the way to win Silver in the U17 Girls.

In the U17 Boys, Killian Walsh shook off a hip niggle to run very strongly throughout the race and finish 4th in the 5km run. Brian O’Culain picked up a stitch but showed great character and resolve to close out with 3rd place.

Piotr Prokop is a man with a plan – once again he started out very conservatively towards the back and built strongly as the kilometers passed, catching people all the way. In the end he finished as 3rd intermediate in another strong run.

Craughwell Strong over the Cross again

After two days of fantastic competition, the medal tables have been totted up by the statisticians, and Craughwell did very well yet again, topping the individual medal table having almost twice as many medals as the second placed club, and coming 2nd just behind our neighbours South Galway AC on the teams table with the highest number of team Golds. Well done to all the athletes, officials and the Co.Board for organizing.