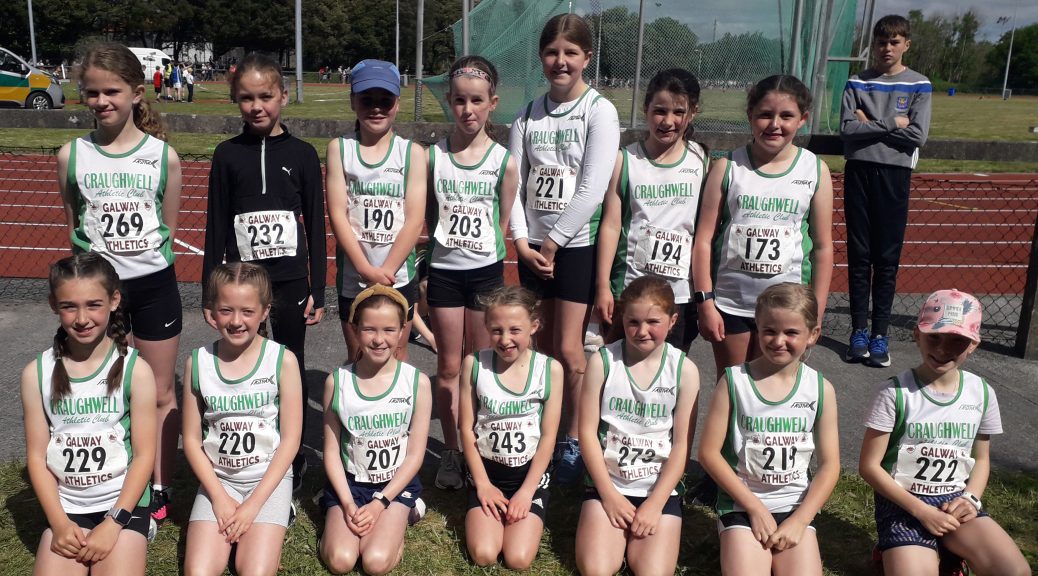 In Dangan this weekend, the future of Craughwell Athletics looked as bright as the sunshine as the Galway Juvenile Track and Field blazed ahead apace.  The NUIG Facility looked resplendant and full credit to host club Tuam AC on an imprOn Saturday, the older ages of u13-u19 competed and Craughwell AC took the largest haul of wins of the day with an exceptional 44 Gold Medals, 22 Silver and 16 Bronze from the 138 entries.

Claudia Coyle was a superb winner of the 800m, coming from the back to take the win convincingly.  Aeveen Kelly had led much of the way and won Silver with 2:32.  Claudia also won Silver in the 1500m with a fine 5:10 performance.  Both the girls and the boys u14 relay teams won Gold.

In the u18s, Evan Hallinan led the way when smashing the Galway U18 Championship Best with a fantastic leap and new PB of 1.96m and a few very close efforts at the 2m mark. Jade Moorhead was also in sublime form when taking the Galway title with a brilliant leap of 1.60m and almost nailing 1.65m, with Leonore Church and Siofra Davis sharing bronze with 1.40m leaps. Evan added further silverware with a 23.87 time to take the Galway title in the 200m and a leap of 12.13 in the triple jump to make it triple Galway titles on the day.

Jade was also very impressive on the track in her first time ever over the 100m hurdles and coming away with a fine bronze medal in an impressive time of 16.64, and added the Galway title later in the 200m with a storming finish in 28.31. Alison Corrigan took the Galway title in the U18 100m sprint in a great time of 14.06.

Eva Kelleher leaped to victory in the U17 Girls High Jump with a brilliant 1.50m and following it up with a leap of 4.74m in the long jump to claim silver (only 1cm from the lead) and a time of 13.59 to claim further silver in the 100m sprint. Erin Kelly took the Galway title in the triple jump with a super leap of 9.48m on her final attempt, with Ella Lyons making her debut in the event to take silver with a fine 8.99m. Siofra and Erin also medaled in the long jump with Siofra claiming a brilliant Galway title with a best of 4.52, Erin 3rd with 4.22, Ella 4th with 4.17 and Leonore 5th with 3.92. Isabelle Mangan made her debut for the club in U17 long jump with a best of 3.43m to place 4th.

Aoibhe Fahy took silver in the U18 javelin with a fine throw of 21.83m. Andrew Power went 1 better in the U18 Boy’s javelin to take the gold medal with an exceptional throw of 44.17m, adding to his Galway title in the long jump with 5.11m from earlier in the day and a Silver medal in the triple jump with 10.65m.

On Sunday the sunshine continued as the younger ages took to the field.

Ruairi McNena wn Gold in the 60mh with a fine 11.74 with teammate Sean Colleran taking Bronze in 11.84.  Ruairi also won bronze in the Long Jump with a 3.48m clearance.  Sophie Meehan won Bronze in a highly competitive 600m with a fine 1:58.9s time.

Kare O’Leary won Gold in the 60mh in an exceptional 12.32s with Faye Whelan taking the Bronze just behind her.  Evie Gillespie threw exactly 10m to take the Silver in the Javelin.  Lincoln King blitzed the 60m in 8.59, closely followed by Sean Colleran who won Bronze in 8.94.  Danny Cahill won Silver in the High Jump.  Sean Colleran capped off a great day by winning the High Jump in 1.20m followed by Alex Hughes and Donal Coyle in Silver and Bronze.

The U11 girls were particularly impressive with 4 of the girls placing in the top 7 out of 56 sprinters with Ruby Maher and Laoise Colleran tying on a time of 9.69 to take silver and bronze in the 60m and the gold medal in the paired competition and Cerys Johnston and Reailtin Ward racing to times of 9.99 and 10.01 to place 3rd in the paired competition.

The four girls followed it up later in the day with a brilliant gold medal in the 4x100m relay in a time of 1.02.99 along with sub Ella Farrell. And our second girls team came ever so close to the podium in the relay, missing out by the tiny margin of 0.32s with their team of Bethann Beattie, Ella Whyte, Ava Burke, Maeve Desbonnet and sub Sophie Mullane.

The boys also shone in their relays, racing to a time of 1.03.29 to take the silver medals with their team of Nathan Quinn, Jack McNena, Conor Quinn and Conor Mannion. Our second team of Rian O’Donnell, Erik Daniels, Cormac Burke, Rhys Hennessy and sub Alfie Devine also had a great run in their heat to finish in a time of 1:10.82. Earlier Jack McNena had the 2nd fastest time of 9.54 to take the individual silver medal in the U11 Boys 60m.

Conor Mannion had another outstanding day on the track coming home with no less than 6 medals – Conor placed 3rd in the individual rankings in the 60m in a time of 9.74 and combining with Jack Hibbitt’s 9.90 to take the silver medals in the paired events.

The dynamic duo were in fantastic form again later in the day in the 500m with Conor winning heat 2 in a time of 1:37.01 and Jack repeating the feat in heat 3 in a time of 1:37.26 to take the individual gold and silver and as well as the gold medal in the paired competition. And later the pair combined with Dylan Burke and Finn Hughes to take the bronze medals in the U10 Boys relay in a time of 1.05.92.

Also in the relays, the U10 Girls team of Roise Beattie, Muireann Kelly, Emma McGovern and Isabel Maher were very unlucky to just miss out on the podium when winning their heat in 1.11.63 and placing 4th overall just 0.2 of a second from the bronze medalists.

Earlier Muireann and Abigail Machaj paired together to take gold in the turbo javelin while Isabel and Kaci Madden combined to take the bronze medal in the U10 long jump. Muireann was slightly off her brilliant best in the 500m, thinking she had another lap to go and placing 5th in her heat in 1:56.89 with Sarah O’Dea having a brilliant run to place 4th in her heat in 1:55.12.

And in the jumps, Nathan Quinn had brilliant leap of 3.18 to place 4th in the long jump and combine with Rian O’Donnell who was 7th with 3.01 … to take the silver medals in the paired event. While in the U11 girls long jump, a few of the girls struggled a little with their marks for jumping off the board – but a brilliant leap of 3.12 by Cerys Johnston and 3.06 by Ava Burke helped the pair to take the bronze medals in the paired event.

U10 Emma McGovern came 3rd in the 500m with a gutsy run.  Orna Murray stormed home to take 3rd in her heat, both taking silver in pairings for 500m.

There were loads more personal bests from our athletes on the day which didn’t feature in the medals on this occasion and loads of fun on a lovely day out in Dangan. If you didn’t get a medal – don’t worry, lots of our most successful athletes went home empty handed for many years in Dangan!