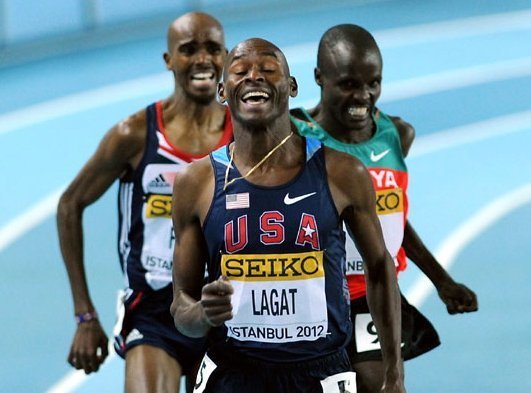 Craughwell AC Athlete Rob Hogan flies out today, taking on the best in the world in the World Speedgolf Championships in Oregon next weekend.  For anyone unfamiliar with the sport of speedgolf, check it out on Wikipedia, where you can see that he has a decent chance of taking the crown, having come 7th last year and won the biggest tournament since where he beat all comers well, including last year’s World Champion.

It won’t be easy – the sport is growing in popularity and exposure.  Among his opponents will be Kenyan-turned American legend Bernard Lagat – seen below.  Lagat has won an incredible seven world titles – including the ridiculously hard 1500m/5000m double in 2007, and medalled in two Olympic games.  He has run the second fastest 1500m of all time – clocking an awesome 3.26.34.  Lagat speaks about his chances in the speedgolf world championships here.

Lagat laying the smack down on Mo Farah in 2012 – but will Rob be so easy to put away?

Some other competitors might not be as familiar to the more casual athletics-fan, but will be no less talented.  New Zealander Nick Willis won Silver in the Beijing 1500m, and has been in superb form of late.  As recently as last month he won the 5th Avenue Mile in New York, the highest quality road mile of all time with an incredible 16 athletes finishing under the 4 minute barrier..   Willis dipped on the line to finish in 3:50, just a fraction ahead of .. none other than Bernard Lagat.  Willis is interviewed about his chances in the upcoming speedgolf tournament here. 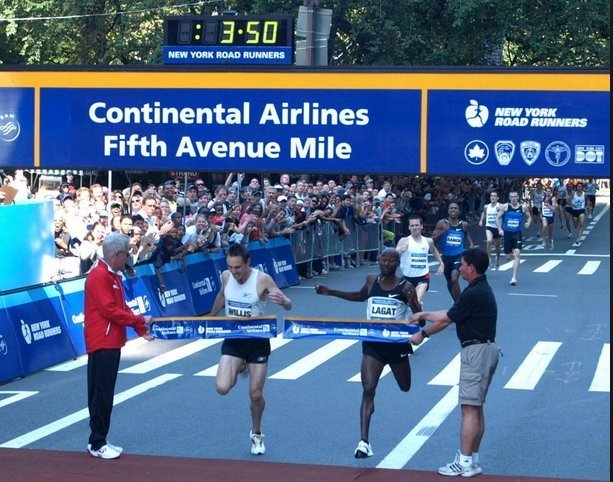 Back at the hall over tea and biscuits all chat was on how to beat Craughwell AC’s Hogan.

Okay, let’s be honest here – even though he’s been going great in training, if it were just a running competition Rob would be hard pressed to even see these guys at half way.  However it’s not a running competition – it’s a speedgolf one, and the general wisdom is that golf skills should count more than running skills when it comes to deciding the overall winner.   Rob has proven that he has the right combination of speed and skill to do the job, so it’s all about getting some luck on the day.  It should be very interesting – if you have time on the weekend you can watch the tournament live on stream at http://www.bandondunesgolf.com/.

In other world championships news, good luck to former Craughwell AC athlete Peter O’Sullivan as he heads off to Brazil to compete in the masters track and field championships along with clubmate Mary Barrett. Hopefully both of them will have a great experience and come home with some metal to show for their efforts.  Looking at the results from 2011, they should both have every chance.