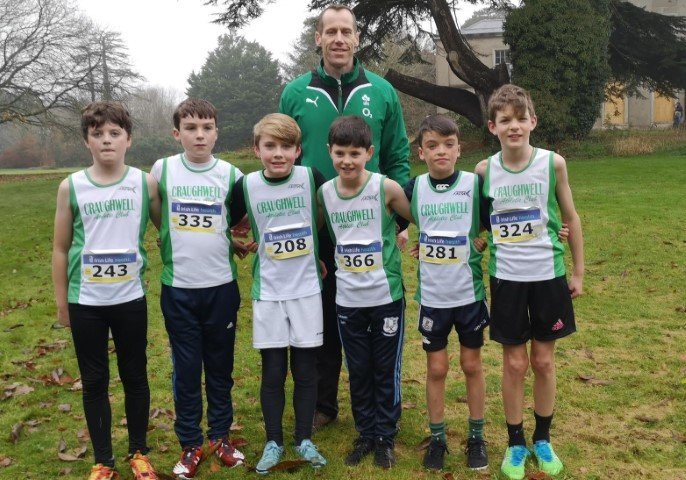 After the heavy rains of late, the National Cross Country course in Abbotstown provided a challenging and muddy venue for the 2019 Even Age and Senior National Cross Country Championships.  The nationals represent a culmination of the year for many – a chance to show the fitness gains made in the long weeks and months of training since the Summer, but also tricky to be right on the day.  Coming from Connacht, the standard can be a shock to the system and medals are always rare.  Fortunately on this occasion almost all of the Craughwell Athletes managed to deliver season-best performances at the right time, and it made for a record-equalling best day for the club at this level in terms of success with no less than two individual medal winners, one club team medal, contributing athletes on a Galway team medal and several breakthrough performances which guarantee the athletes participation in the Connacht Endurance squads for 2020.

In the second race of the day, Craughwell AC’s under 12 boys team won team Bronze with an excellent score of 205 points in a ferocious race over two challenging 1km laps.  They were led home by Stephen Joyce, stepping up in age who was 22nd, followed by Keelan Moorehead in 36th with Declan O’Connell and Stephen Ruane working well together in 73rd and 74th.  This is a phenomenal result, and great credit goes to them and their coaches, led by the inimitable Ronnie.  The u12 girl’s team of Emma O’Donovan (102), Katelyn Walsh (112), Keevagh Barry (127), Ciara O’Connor (143) Amelie Bocquet and Aeveen Kelly all ran strongly in the very challenging conditions. 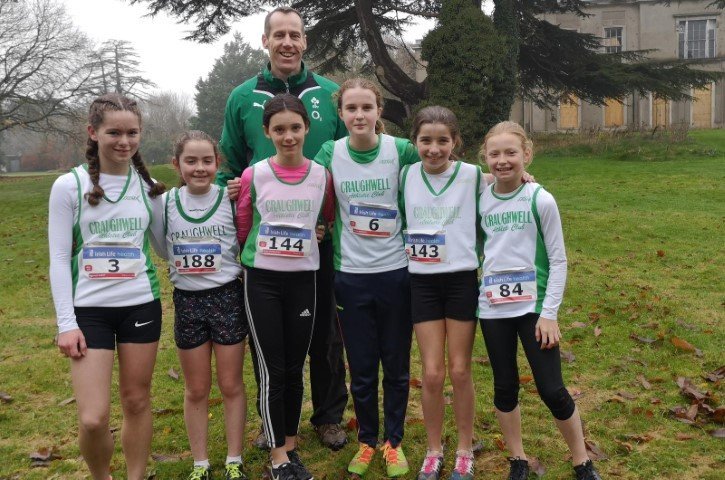 U12 Girls with Ronnie – all ran brilliantly!

Mathys Bocquet finished 5th in the u14 boys race in a razor tight photo-finish to win Bronze as Craughwell’s highest individual finisher of the day.  There were just 5 seconds separating the first 6 athletes.  I have to confess on the day I was convinced Mathys was 4th and a few re-watches of the AAI live stream hasn’t changed my mind!  It was as close as it gets!  Mathys had Galway company in Gearoid King of Castlegar who was 10th which is a great result for the county. 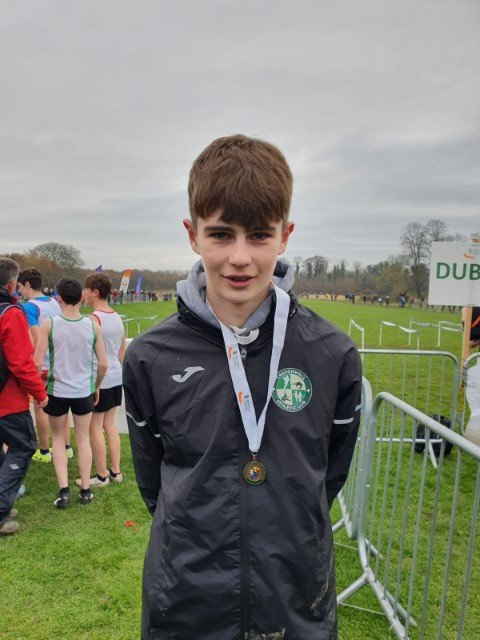 Mathys finishes in the medals for two years running!

This is the second year in a row that Mathys has medalled at the nationals – last year he finished 6th – an amazing achievement! 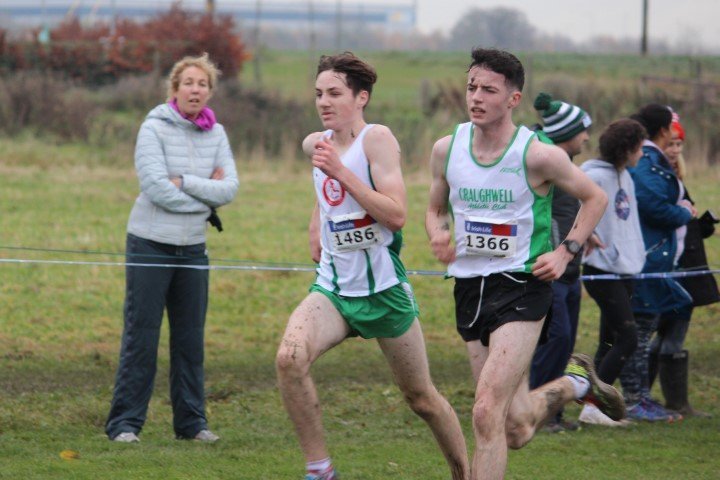 Sean battling for the line against an ambush!

Sean Cotter had a fantastic run, stepping up in age to come 6th in the hotly contested u18 Boys race, one of the most challenging categories and surely a contender for Craughwell performance of the day.  Sean is no stranger to the podium at national level – he looked fresh, fast and full of running. 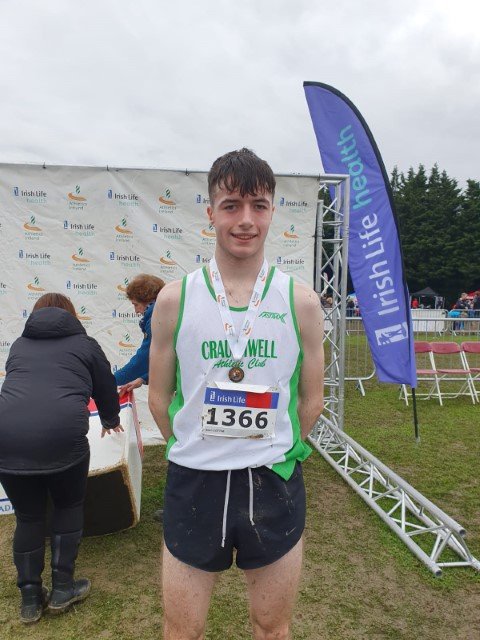 Yet another national medal for Sean!

I think my vote, and that of many others I spoke to for performance of the day also came in that race.  Kyle Moorehead has been super-solid in training for the last few months but often walks away from XC races wondering why his training form isn’t translating to race position as it should. 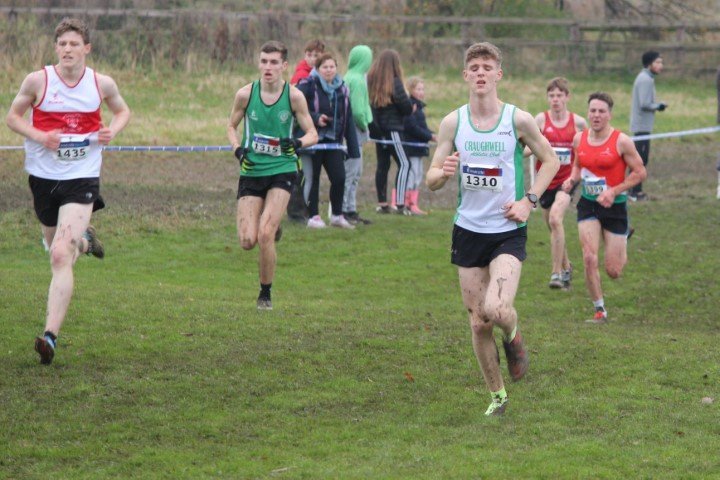 Yesterday the 2019 international steeplechaser shook that monkey off his back as he went out fearlessly from the start and drove through the field tirelessly with the big guns.  About 3.5k into the 6km race disaster struck on the uphill as the mud sucked his shoe off him and he was left with one spike for the remainder of the slippery course.  Amazingly, Kyle didn’t let that deter him and he only lost a few positions over the last 2.5k.  I have no doubt that the shoe cost Kyle about 20-30 seconds over the course so there is no telling where he might have ended up had is stayed on.  Regardless, it was a fantastic run from Kyle!  When looking for pics of the event, one of the AAI photographers had captured this artistic shot of a shoe hanging from a tree – yes, it’s Kyles :D!! 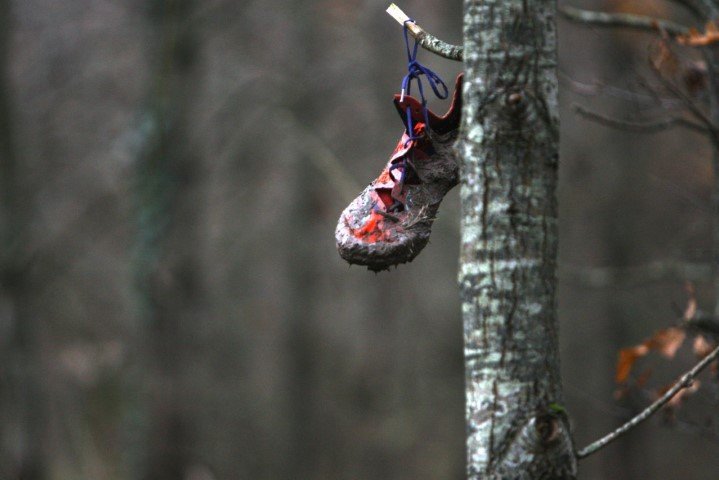 Kyle’s Spike is probably still decorating this tree in Abbotstown

Three Craughwell AC Athletes contested the Junior men’s race. William Fitzgerald took his place as one of the top prospects in the country with a superb 17th place finishing position with Patrick Noonan in 58th of the 130 finishers.  This was a phenomenal performance for William in particular, to finish second Galway Junior on the day.  William and Patrick both scored in the Galway team which took national Bronze medals.  Ben Ryan is building back to running fitness and also ran in the race and acquitted himself very well. 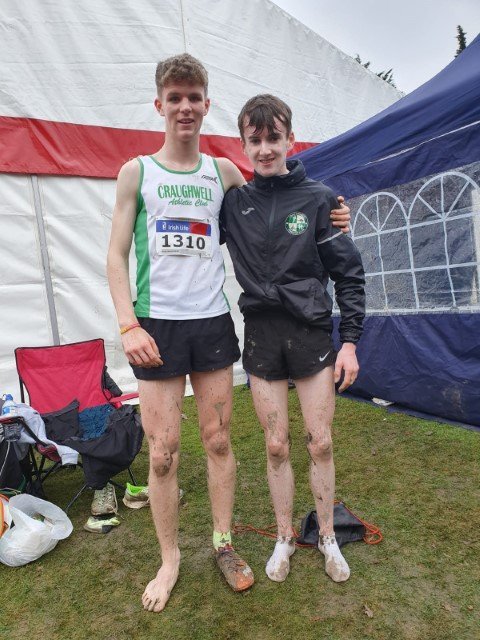 Kyle and William after the race 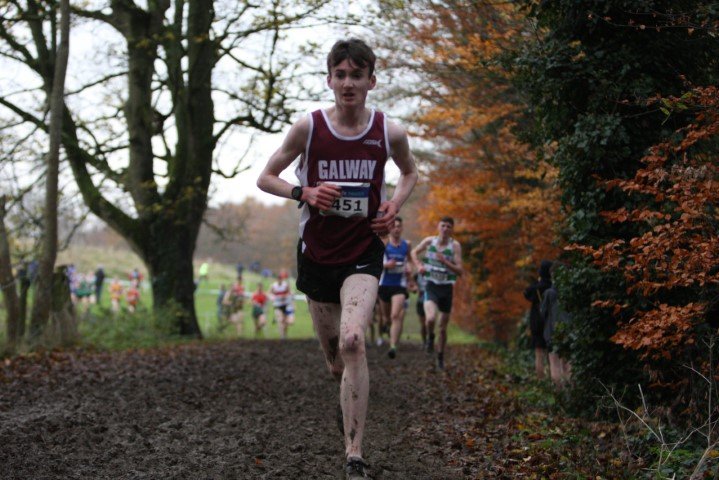 One note of hindsight!  Afterwards we were informed that u18s could be entered as Juniors – had we thought of that we would have been 4th Junior team behind Ennis and very close to medalling as a team with the combined performances of Sean, William, Kyle and Patrick.  Doh!! Next year!!  It is FANTASTIC to see Galway Juniors medalling at the Nationals.  A phenomenal Galway result worth mentioning in the race was Thomas McStay of GCH’s brilliant Bronze – great to see!  This current crop of Galway Juniors are all super-sound, supportive of each other and have an excellent attitude to the sport – I’m really optimistic about the future of Galway distance running! 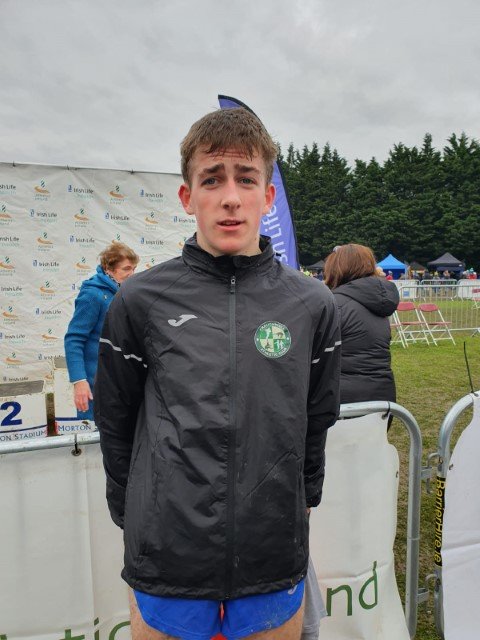 In the u16 boys race, Ross McGuinness ran a phenomenally quick race 4000m to finish 32nd and first Connacht man home.  Ross managed to sustain a superb 3:28/km for the distance over atrocious muck.  Anthony Boyle, running his second ever cross country recovered well from a quick start to finish 97th in the very strong field. 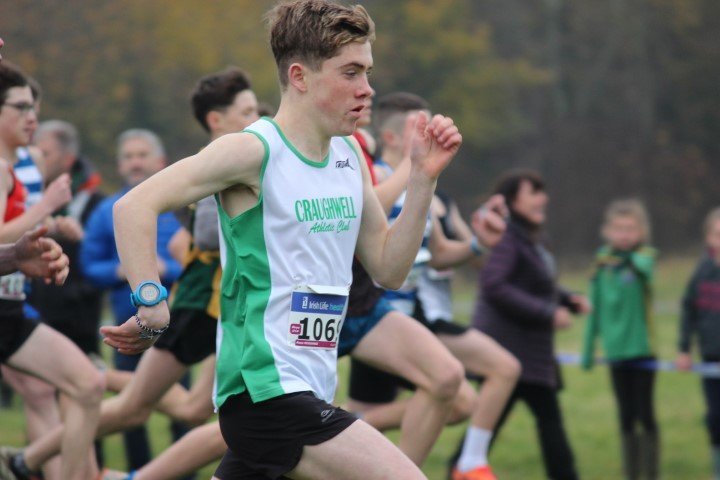 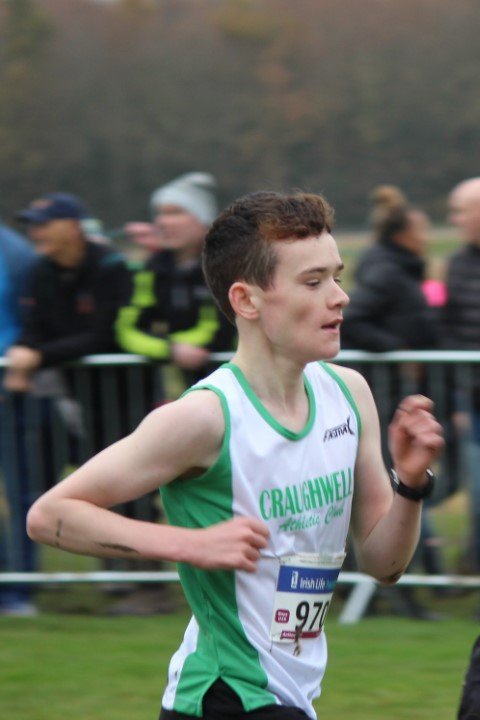 Emily Miskella continued to improve as she finished 38th home and 2nd Connacht girl in the u16 girls race, which had a massive field – Killary sorted for next year!. 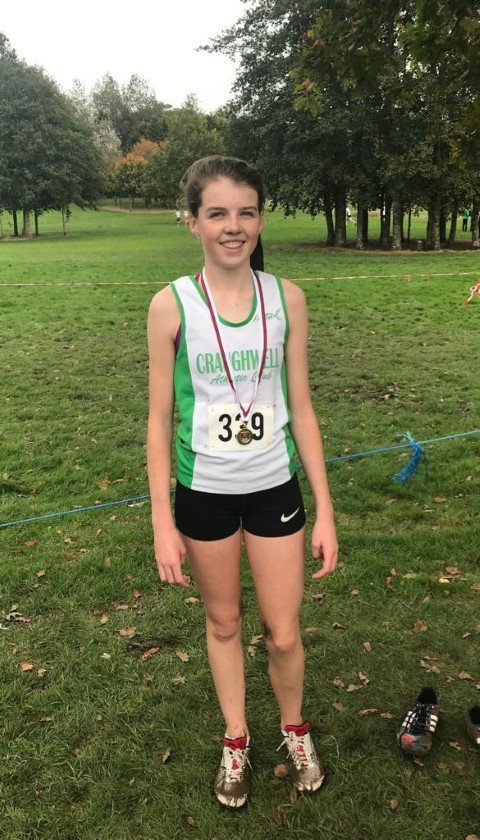 Emily delighted with her top-40 finish!

Emilie’s clubmate and training partner Emma Boyle also had an excellent run in the u18 girls race to finish 47th and 3rd Connacht woman – a fantastic performance for Emma and marked step up from her last outing. 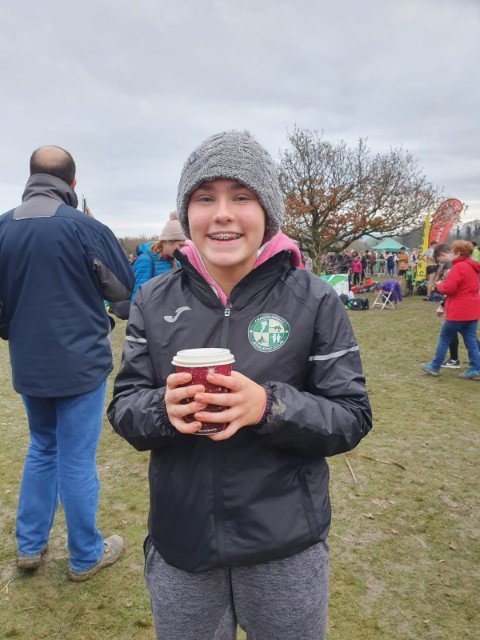 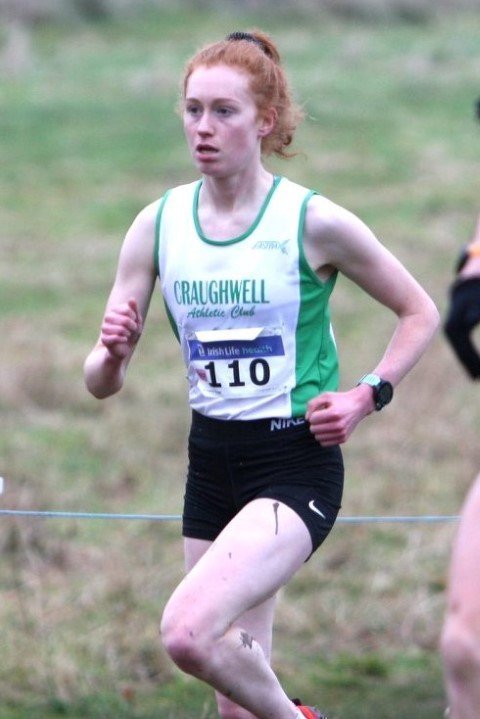 In the Senior men’s race over 10km, I (Mark Davis) was first home for Craughwell in 97th place followed by Jack Miskella who came 16th u23 in the same race.  For anyone that might finish high up in their local road races or win the odd park run, the event is an eye opener and a good reality-check!!  To put in perspective, pretty much anyone in the top 140 would be a potential 5k series winner in Galway!  I actually think the standard has risen in my time involved in the sport and I feel this is the case in many age groups – it’s great to see! 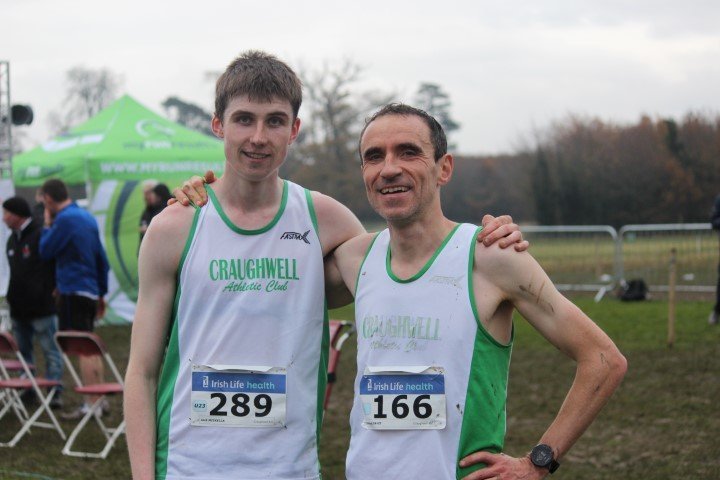 10k XC is fun and all, but Jack and Mark happy that’s over!!