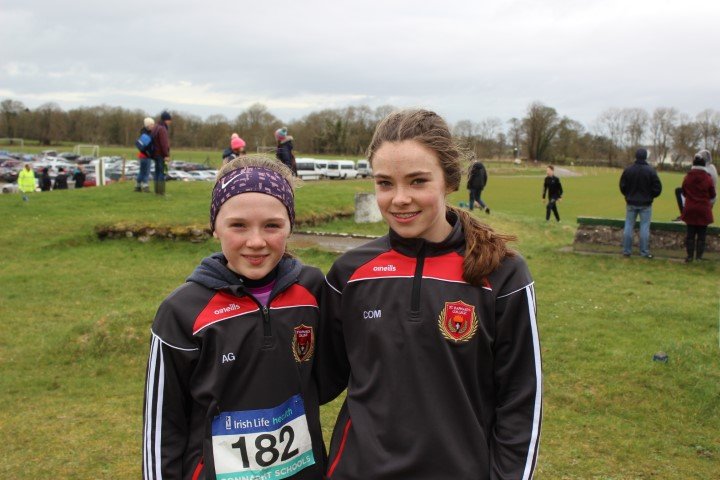 The finalists from North and South Connacht competitions met today in perhaps Ireland’s finest Cross Country course at Bushfield, Loughrea.  The weather was perfect for racing – a welcome change from the horrible conditions in the qualifiers, and the footing was ideal for the athletes.  Typically for a Saturday – numbers were smaller than the qualifiers (no day off school here!), but the standard was noticeably higher in all races.

Craughwell AC Athletes represented their schools with pride again, both individually and as a team – with some of the winning teams comprising entirely of athletes from the club!

The distances were all a little longer for this event than the earlier one and as usual the action kicked off with a very competitive Minor Girls race.  Clodagh O’Meara, representing St.Raphaels, Loughrea was once again the standout performer with a superb performance to take 3rd position.  She ran strongly all the way in a brilliant show of talent and determination.

Fantastic running from the St.Raphaels Girls!

Close behind Clodagh, Leonore Church representing PCA also had a fantastic run to drive home in 9th position in a hard-fought field.  Perhaps the most impressive breakthrough run of the day came from Alanah Grogan of St.Raphaels.  Alanah is known as a talented race walker with a great running style – she really dug deep today and drove home well up the field with great pace – I’m not sure of her finishing position but she looked to be in the qualifying spots to me!

In the next race, the Minor Boys Mathys Bocquet would have been the hot favourite after his domination in the qualifiers, but he is struggling with a slight niggle the last week or so so decided to choose the wise route and sit it out. The only athlete I am aware of is Killian Walsh representing PCA who had a very solid run to finish 24th.  If anyone knows of more Craughwell Athletes from this race please send it on! 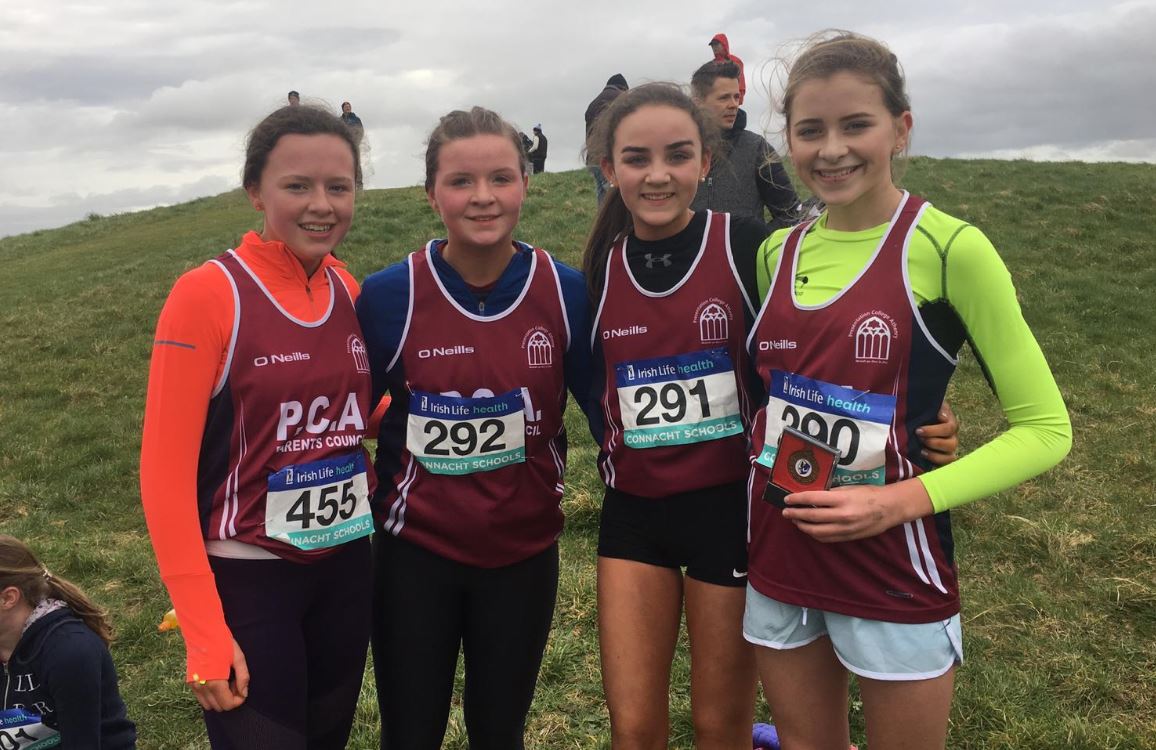 In the Junior Girls Race, Club standout Fauve Alymer was also absent due to family commitments, however her clubmates certainly accounted for themselves brilliantly, with the Presentation College Athenry team winning the team category and putting themselves through to the all Irelands.  First home for the Pres with a marvellous individual Bronze medal was the spectacular Aoibhe Carr. Aoibhe bravely took on the race and ran strongly throughout, such a talented prospect!.  Next home for the Pres in 11th position was Jade Moorehead closely followed by Grace Leen and Aine Hardiman. A brilliant performance from a great group of young athletes, and it was rewarded with the pres getting the first slot on the new perpetual plate – the first piece of silverware to cross the door of the new School!? 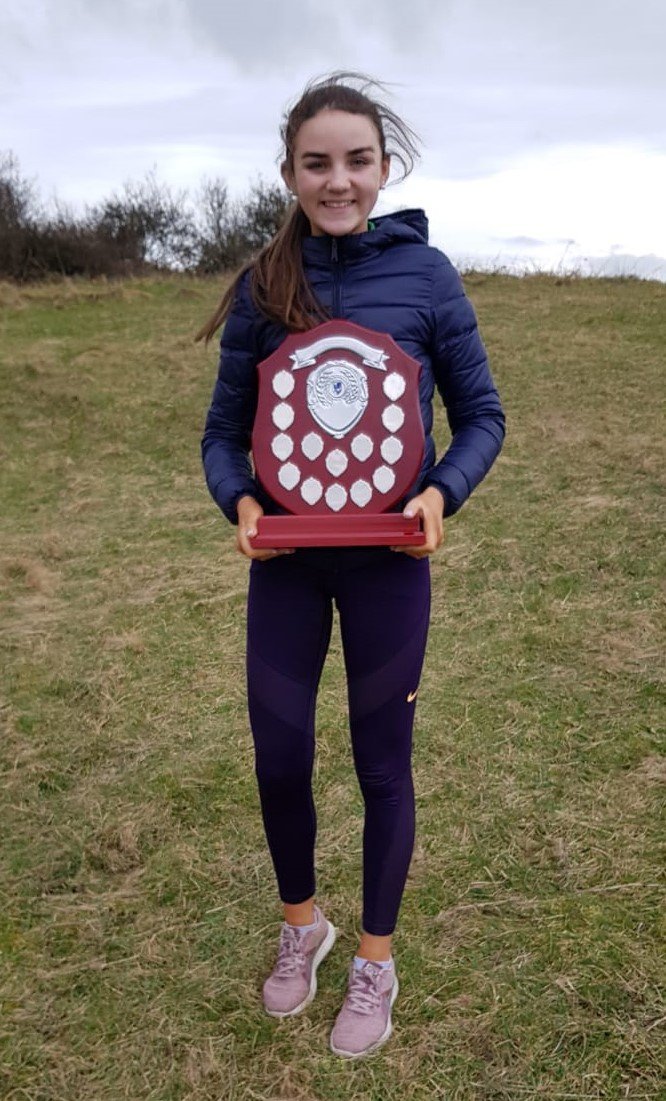 The girls kick off the decorating of the new Pres School!

Craughwell AC had no athletes that I’m aware of in the Junior boys race (someone send me the details if I’m wrong here!). 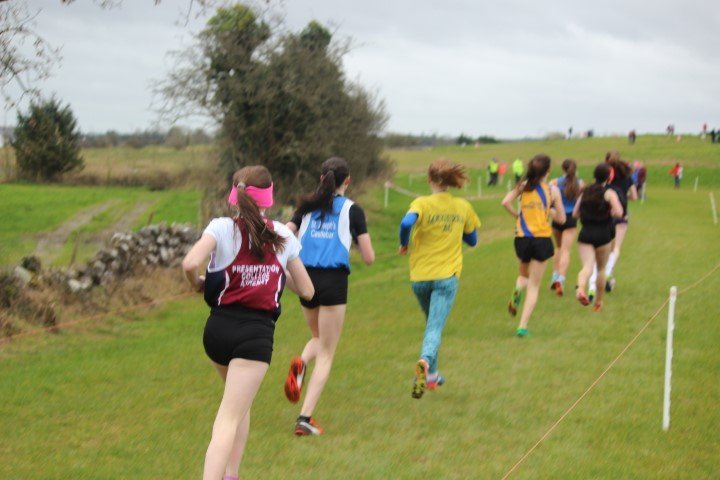 Emily working her way smartly through the field!

Next up was the 3000m Intermediate Girls race and it was a really high standard affair with a very strong group of about 12 or so top athletes taking to the front early.  Young for the age group (she will be there again next year), Emily Miskella of PCA was the sole representative of the club and her school.  Emily has been training very consistently this year and it’s showing in her performances.  She ran a perfect race tactically from start to finish – tucking in at the back of the leading group of 9 athletes for the first 1500m loop, and making all the right moves at the right times to consistently reel in those ahead of her.  She was gaining on the leaders all the way to the end, but ultimately finished in a fantastic 4th place, very close to the top 3 and easily qualifying for the All-Irelands next month – a smashing performance!! 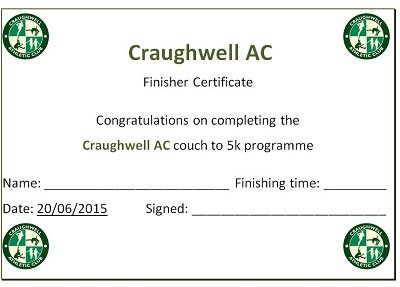 A fantastic race by Emily!

The Intermediate boys 4500m was next and unlike the South Connachts which had a relaxed vibe, no prisoners were taken this time!  The field was deep and the race was fast from the off!  The leading group of Michael Morgan, Sean Cotter, Ross McGuinness and Barry Murphy set out at a punishing pace of close to 3:10 per kilometer.  Behind them, a large following group contained other Craughwell Athletes – Kyle Moorehead, Oisin Davis and Luke Burke. 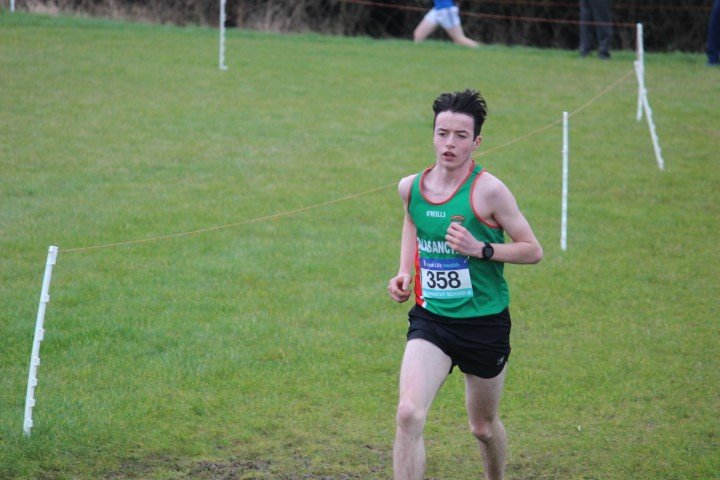 Back in the groove – Sean had a powerful run

The classy Morgan continued to push the pace and soon the field spread with several athletes trading places as they felt the burn.  Sean Cotter representing Calsanctius had a sensational run to finish in Second place overall, a fantastic return from injury for Sean who is looking stronger for the break.  Next home for Craughwell and representing the pres was Oisin Davis in 4th.  Oisin ran a smart race, not getting drawn in by the early pace and climbing strongly through the field for what looked like a comfortable finish.  Next home for the pres was Ross McGuinness in 5th place.  Ross had a great run especially given that he was quite ill last week and also that he did get involved in some of the early fast kilometers! Another triathlete Luke Burke had a sensational run to come home next in 8th place.  This was one of Luke’s best ever performances – he also took his time to settle into the race and built through the field and it worked out great for him.  He was very close to claiming 7th but the finishing straight was just not quite long enough for him!  Pres team captain – Kyle Moorehead rounded out the Craughwell domination with 5 athletes in the top 10 of a high quality field.  The second plate for the new pres! 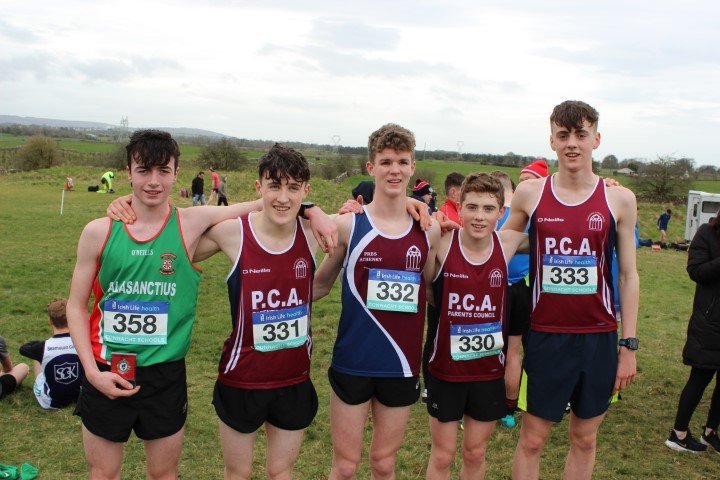 The action continued apace in the Senior Girl’s race over 2000m with two 1km laps.  The relatively short distance made for a ferocious pace with a packed finish.  Ailbhe Miskella bravely took on the race, getting stuck in at the head of affairs right from the off. It was a superb run and as they turned into the home straight, I really thought she had done enough to seal Silver for herself but right on her shoulder was 800/1500m specialist Maeve Dervan and despite a fantastic fightback from Ailbhe she got just outkicked – a fantastic race and super bronze won!! 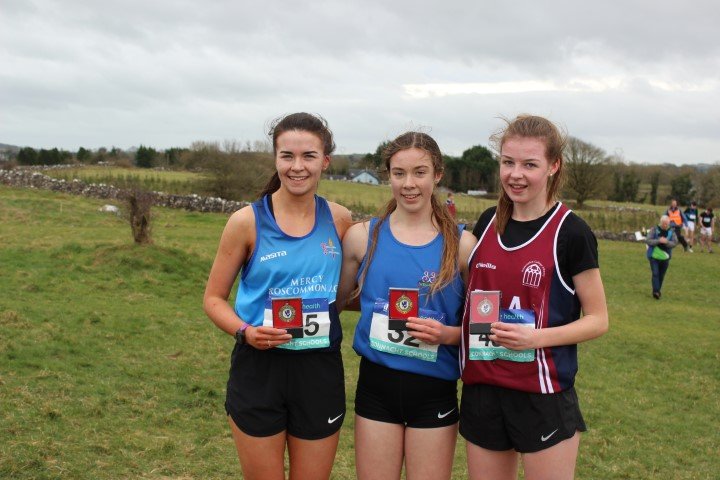 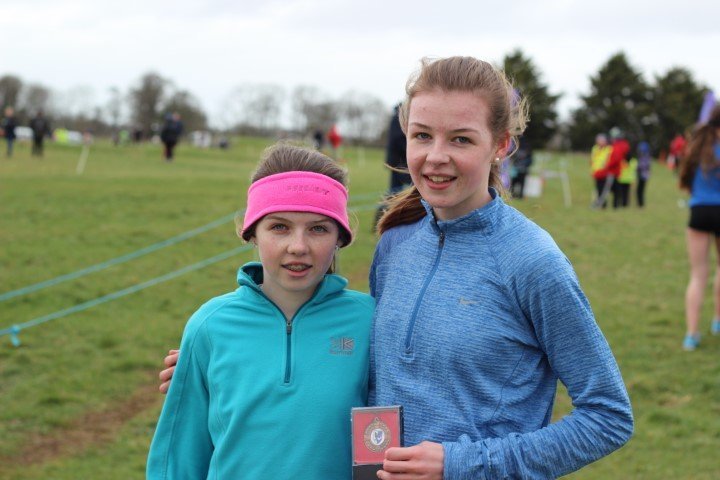 The final race of the day was another barnstormer!  The Senior boys race was run over 5500m which is quite a distance on that undulating course.  The top group of 3 athletes were of the highest standard – Keelan Kilrehill taking out the field at a savage pace and bringing two along with him.  Patrick Noonan soon found himself in a fascinating battle for 4th place, stuck shoulder to shoulder with the excellent Thomas Devaney for the entirety of the race.  The last 500m was particularly interesting – Patrick made a move with 500m to go but Devaney was not having any of it and responded with a kick of his own in the last 200m to make a dive for home.  Patrick hung on and made a final surge for the front, just pipping Thomas in the last 5 metres or so.  A fantastic race by both young men and the dramatic finish was captured brilliantly by the Connacht Telegraph (Harry Murphy/Sportfile) below: 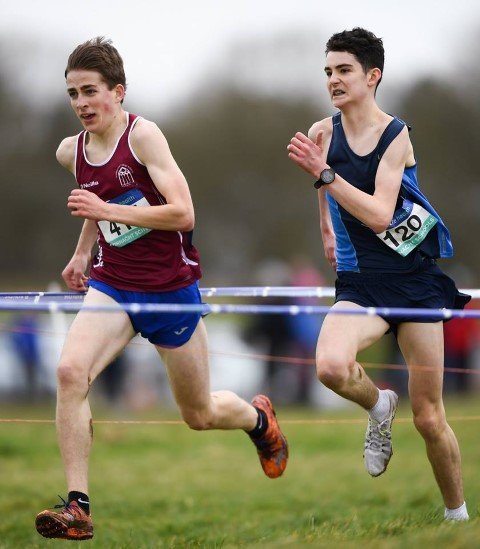 Patrick’s rapidly improving brother Sean also had a super race finishing well inside the top 10.  Sean was in a battle for the first few kilometers, but burned off his opponents and then found himself in a bit of a “no man’s land” where he didn’t have opponents in range either in front or behind him for the remainder of the race.  He kept his concentration and ran hard throughout and in the end I felt that he was gaining on those ahead of him.  When it came to the home straight – Sean didn’t disappoint and delivered his trademark kick to finish off a great run for perhaps his last XC of the Season. 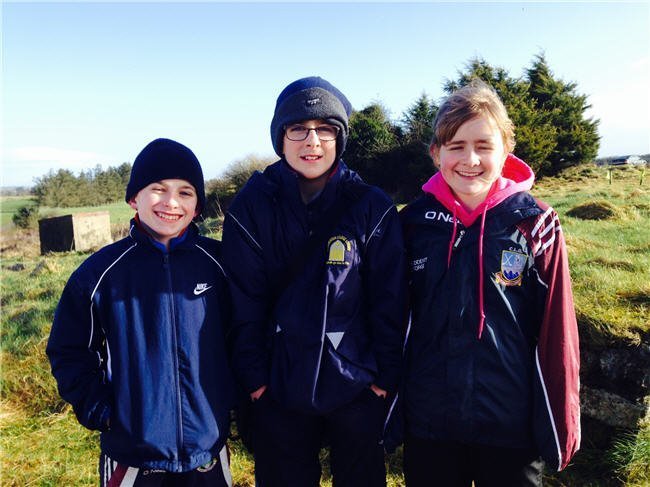 Brothers in Arms – Great performances from the Noonans! 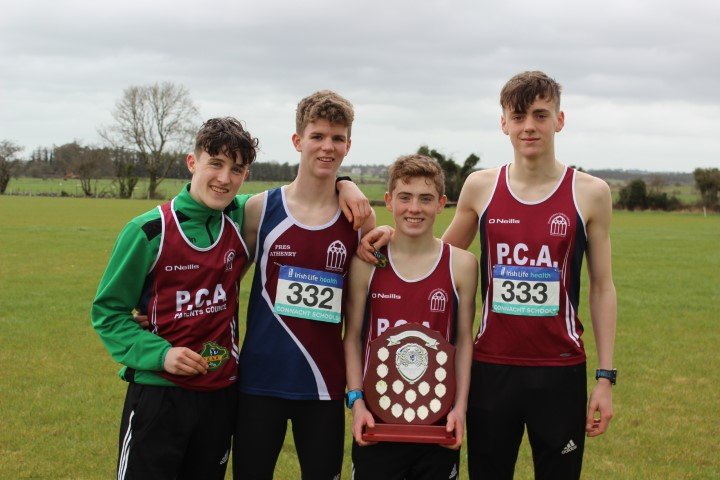 Another Shield won for the new Presentation School!