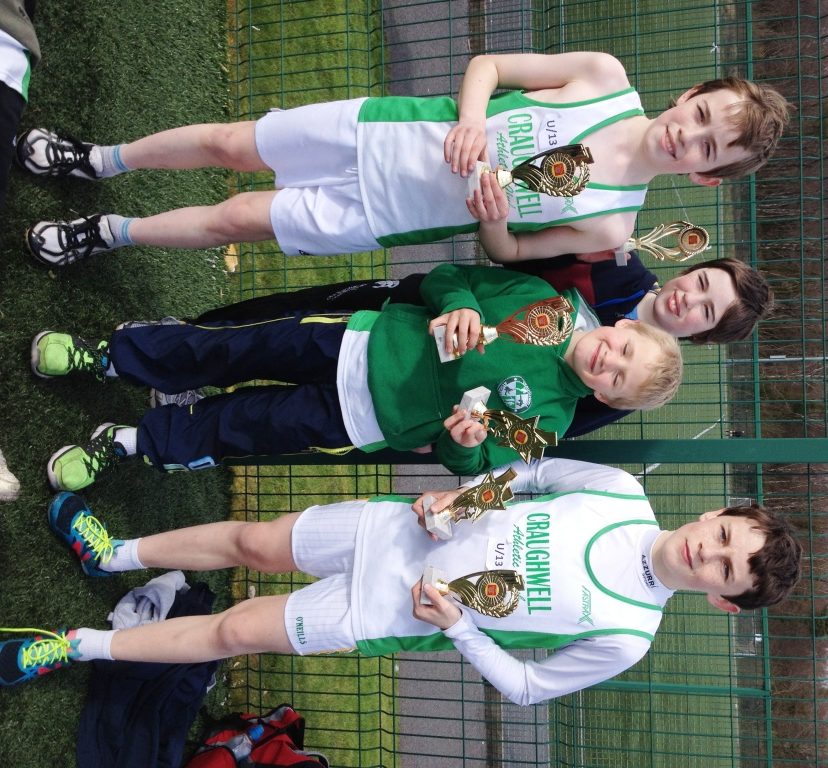 Some of the victorious Craughwell AC athletes in Ennis

A small band of Craughwell AC athletes had a great day at Ennis Track the weekend before last. First off was the U14 shot putt where Micheál McFadden (who hadn’t intended taking part at all so had no proper gear!!) along with Finbarr McFadden and Ryan Gallagher stepping up an age, took part in the U14 shot with Micheál coming 3rd!

Grace Lynch was 4th in the U9 sprint heat. Evan Moran and Cormac McFadden then both made the final of the U9 sprints with Evan putting in a fantastic run to win the final. Luke Flynn took part in the U10 sprints, Rebecca Flynn and Emily Miskella were both 4th in their U11 sprint heats. Emma-Jane Moran made the final of the U12 sprints. Four Craughwell AC girls (Emma-Jane Moran (u12), Rebekah Flynn, Emily Miskella and Rebecca Lynch] took part in the U12 long jump. It was the first outdoor competition jumping from the board for the latter 3 under 11s and all 3 registered clean jumps between 3.13m and 3.19m. 3.17 for Rebecca Lynch was a competition PB.

Ryan Gallagher came 1st in the U13 sprint final with Finbarr McFadden 4th. All took part in the distance races. Grace Lynch was 7th in the U9 300m in 1:08. Evan Moran had a fantastic run to win the U9 300m in an astonishing 54secs with Cormac McFadden 4th. Luke Flynn put in a great effort over the last 50m to take 5th in his U10 500m with Emily Miskella a very solid 6th in the girls U11 500m and Rebecca Flynn (a close 4th despite just returning from a lengthy injury) in the U11 500m. Emma-Jane Moran was well inside the top 10 in a very competitive U12 600m. Finbarr McFadden was a classy 2nd in U13 600m and Ryan Gallagher a fast-finishing 3rd.

Luke Flynn U10, with Grace Lynch, Cormac McFadden and Evan Moran all stepping up an age, had a great run in the U10 mixed relay to take 2nd place out of 10 teams.

Emma-Jane Moran, Rebecca Lynch, Rebecca Flynn and Emily Miskella finished 5th in their U12 mixed relay heat in a very quick 64 seconds. Their competitors included several all-boys teams, with some boys a year older and literally a foot taller than the girls! Micheál McFadden, Ryan Gallagher, Finbarr McFadden made up an U14 team with Ruari from Limerick AC with Ryan putting in a blistering finish, unluckily finishing 4th by a whisker.

Ennis is a turbo javelin stronghold, so the club can be very proud of an incredible 1-2 in the U11 boys’ turbo javelin, with Liam McDonagh (1st with 18m) and Oisin Keane (2nd with 16m) throwing into a strong headwind against a large field. Our girls u11 trio were simultaneously competing in Long Jump (Rebekah, Rebecca and Emily) yet all 3 were just outside the top 3 in the end.