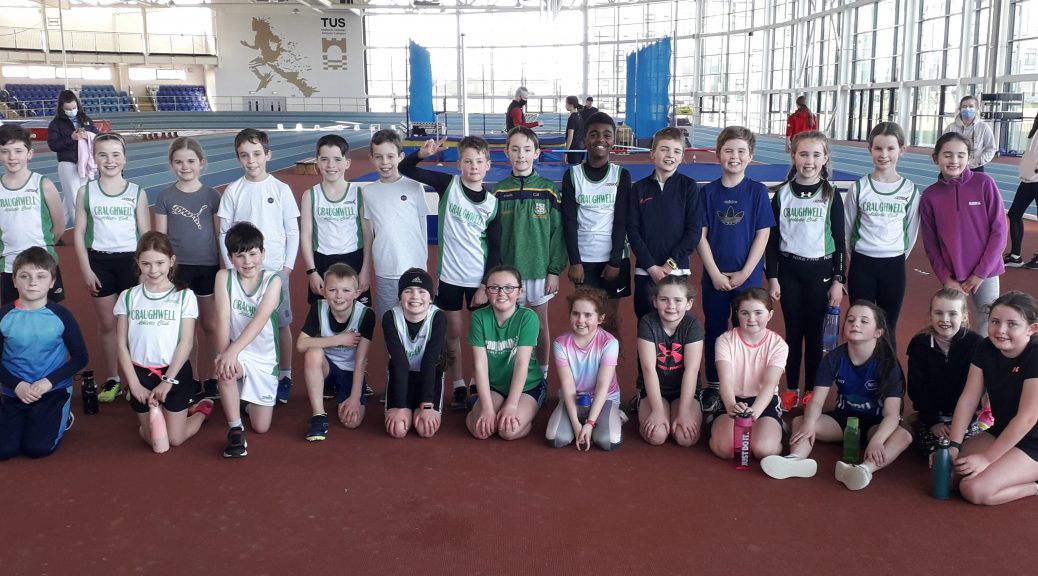 Our U11s training group descended on Athlone International Arena on Sunday for the inaugural ‘Craughwell Indoor Olympics’ on Sunday. The event was a team event with the athletes split into 3 evenly balanced teams and competing across 5 events – 60m, 400m, shot put, long jump and high jump with loads of fun and some great performances.

On the day the ‘Orange’ team just shaded it in the team event to claim the gold medals with 395 points. The ‘Purple’ team claimed silver with 366 points, very closely followed by the ‘Green’ team with 358 points.

There were some fantastic performances throughout the day particularly in the two 400m races where Jack McNena just pipped Conor Mannion on the line in the boys race and Laoise Colleran overtook long-time leader Maeve Desbonnet on the home straight to take the victory.

The shot putt saw big throws from Maeve Desbonnet and Cormac Burke to take the individual victory. While there were impressive performances in the jumps with Halle Feerick clearing 1.06 to win the boys event and Laoise Colleran 1.10 to win the girls event and very close contests in the long jump with Laoise Colleran leading with 3.46m and Nathan Quinn on top in the boys events with 3.34m.

There were some very tight finishes in the sprints with Laoise Colleran, Ella Whyte, Jack McNena and Halle Feerick taking the individual victories.

A great day was had by all and something that the club hope to do again in the not too distant future. And a big thank you to all the coaches and parents who helped out as it was a busy hour and a half to fit all of that in.