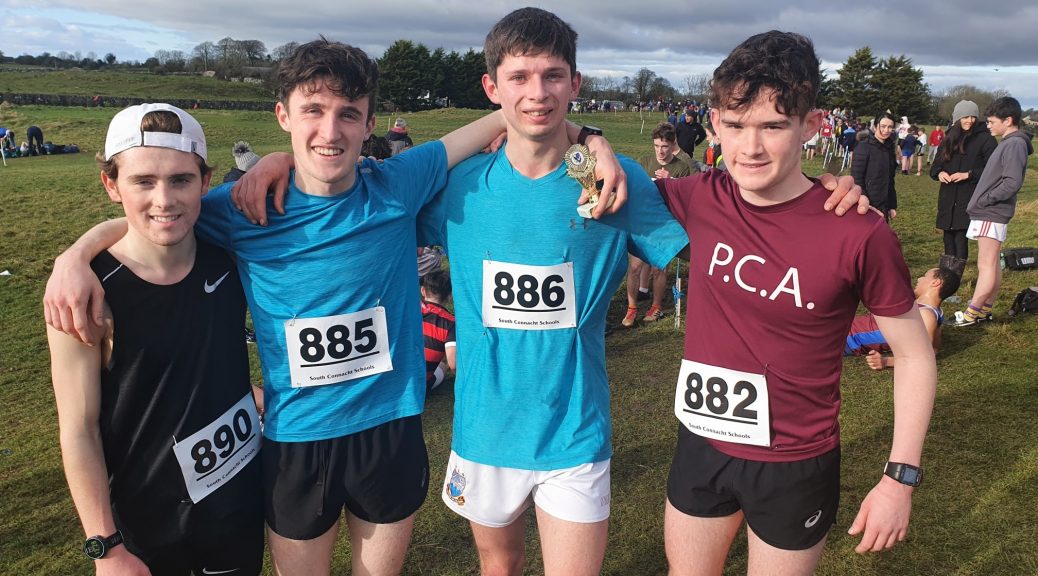 A very short report in on a super two day’s Cross Country during the week. A change this year was to have the girls on Wed and the Boys on Thursday and I think it worked out quite well with timing, etc. My lunch break meant I missed the earlier races but there were some fantastic results from Craughwell AC athletes for their schools, including almost a clean sweep of victories in the lads races! (I haven’t had the chance to cross reference all the names and I don’t know all the athletes names so please let me know who I missed – I’m sure I missed loads, just picking out the couple of names I happen to know!!)

In the girls races on Wednesday, the weather was wonderful and there were some awesome breakthrough runs from many Craughwell AC Girls, delivering super results for their clubs. One of the first girls to get such a breakthrough was Amelie Bocquet who finished a wonderful 6th in the Minor Girls Race. The relaxed Amelie has really started to get into her groove recently and is enjoying her training and it’s starting to show!! Emily Cotter also had a superb performance to finish 12th in the strong Junior Girls Race and was quoted afterwards as saying “she didn’t hate it!”, so is well on her way to catching the addiction!! Emma O’Donovan also was well up there with an 18th place finish in the same race.

In the Intermediate girls, Holly O’Boyle continued to build back from a series of niggles with a strong 20th place finish.

The Senior girls was a strange race as there was a mix-up on distances so the Athletes had no idea how long the race was. In the end I think it was 2.5km, and Emily Miskella finished a solid 4th for Presentation College Athenry, with Grace Leen closing well in 9th place.

Boys to the Fore in all races

On Thursday it was the turn of the boys and they really took charge with some cracking results. Stephen Ruane, representing Calasanctius Oranmore won the Minor boys race in a great battle. Stephen’s friend and training partner Declan O’Connell matched him with a comfortable win in the Junior boys race for Clarin college, no surprised from the national u14 champion. Keelan Moorhead, representing Presentation College Athenry, also ran well with an 11th place finish in the Junior boys race, despite twisting his ankle in one place.

Mathys Bocquet is getting into good fitness recently and was also my tip for the Intermediate Boys race and I was surprised to see an athlete able to stick with him.

They had a great battle all the way over the 4000m, well clear of the rest of the field and in the end Mathys got pipped in the end, but it was a super run for him and just the kind of battle he needed! I went up and chatted to the winner, but the very friendly and talented kid Arturo told me he had just been in Ireland for a couple of weeks and only here for a few months to learn English. the Canary islands are probably too long a commute to Craughwell so I didn’t hand out any membership forms!! There were some other excellent results behind Mathys from Craughwell athletes, notably Oliver Ginty in 7th and Liam O’Connell who finished 11th from the 170 runners!! Cian Lavan from Calasanctius also had a strong performance in 34th, helping Calasanctius to a fine Silver medal.

In the senior boys, Oisín Davis led a strong Presentation College Athenry team consisting entirely of Craughwell athletes home to victory with a dominant win. After one feeling out lap, Oisín pressed ahead to win by quite a distance. Ross McGuinness has been on fire in training but wasn’t feeling 100% during the race but finished it up strongly to come 3rd. Next home for Craughwell and the Pres was Anthony Boyle who closed nicely in 5th place. Luke Forde completed the pres team with a fine finish in 12th place. Luke was just behind Brían Ni Chulain who made a welcome comeback to XC running.

All set for the Connachts which happen the day before the leaving cert mocks – possibly not the best timing in the world!!!