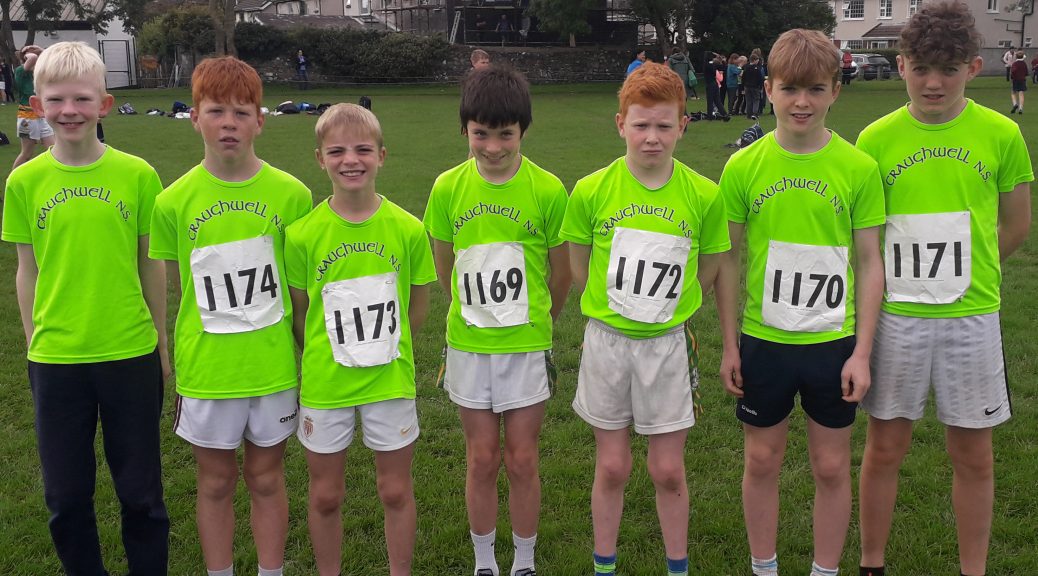 Another glorious day of primary schools cross-country action saw some super performances from athletes in the club while representing their schools.

Pride of place went to Alan Hallinan who had possibly the unique achievement of winning the 6th class race while still only in 5th class. Alan becomes only the 2nd boy from Craughwell NS to take the Galway Schools Senior Cross Country title, with Kyle Moorhead the other back in 2014.

It is the 5th time that Craughwell NS have won the Senior Boys team event in this race. See attached pdf for full details of the school’s performances over the years.

In the Junior Boys 1000m, Lisheenkyle NS won a super team silver medal with 98 points with half the team coming from the McNena family whose first cousin and club stalwart Paul Joyce had many a good cross-country day here in Renmore way back 15 years ago. Ciaran McNena placed 17th in the race with Ruairi 21st and Jack 84th – a great day for McNena AC and Lisheenkyle!

Donal Coyle (Ballinderreen NS) had a powerful run in the same race to take individual 5th place, going on a mad sprint in the last 200m to overtake about 20 lads. Noah Kinneen (Craughwell NS) also had a fine run, placing individual 36th in the race as did Nathan Quinn (Scoil Iosaif Naofa Oranmore) who placed 48th.

In the Junior Girls 1000m, Carrabane NS had a super performance to take the team silver with a score of 70 points. Emily Raftery was the leading runner from Craughwell NS with a fine run to take individual 13th place (an incredible improvement on her 29th place in the semi-finals!) and led her team to 10th place overall with Katie Murphy 55th, Reailtin Ward 61st, Laoise Colleran 62nd, Niamh Keaveney 64th and Ava Burke 65th.

Full results of the day’s action are here:-