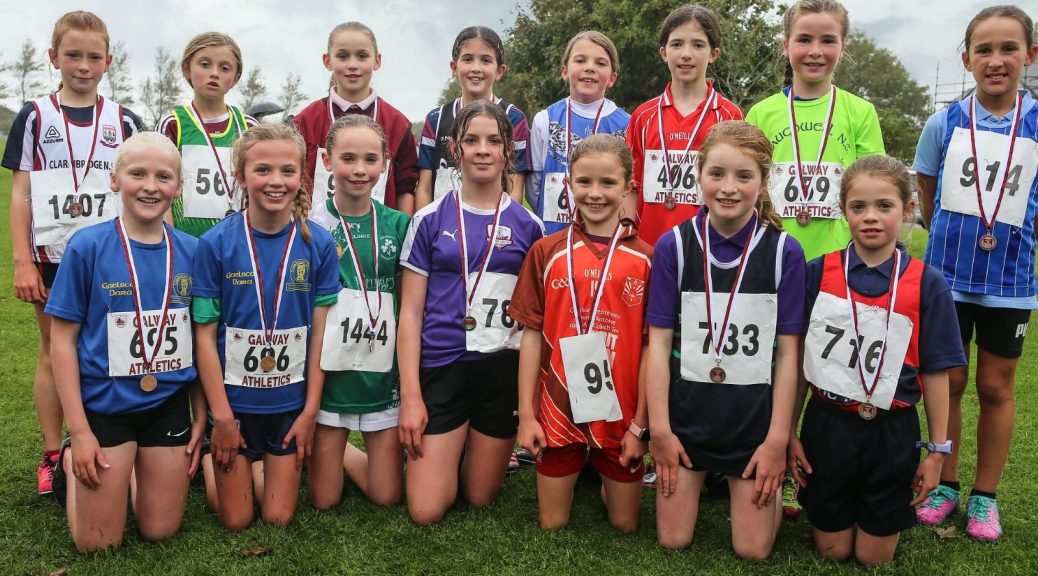 In Renmore there were some fantastic results for Craughwell AC Athletes representing their schools.  Alan Hallinan once again stole the show with an outstanding win in the 5th and 6th class boys final.  Alan led his Craughwell N.S. team of Darragh O’Donnel, Sean Colleran and Zach Keane to a marvellous first place.  The standard was sky-high so this was an exceptional win for the talented young athlete.  Oisin O’Donovan of Ballymanna NS had another superb run to finish in 7th place.  Craughwell’s Sophie Meehan was again well up there in 5th in the Senior Girls race.

Muireann Kelly (Scoil Mhuire) and Laoise Colleran (Craughwell NS) were well up there in the Junior Girls 1000m in 10th and 11th place.  Conor Mannion of Craughwell NS came 7th in the furious Junior boys 1000m with a fine run.

The finals were preceeded by an equally amazing semi-finals on the previous Tuesday.

Record numbers turned out for the Galway Primary School Cross Country in Renmore on Tuesday and there were fantastic performances from craughwell AC athletes representing schools all over the county.  An incredible 2211 athletes finished the races.  This shows exceptional growth since 2005 where there were 259 finishers and well up from the previous high of 1892 in 2019.  The top individual athletes and teams in each field made it through to the finals in Renmore on 27th September.

It would be impossible to highlight all the great performances, but Alan Hallinan from Craughwell Ns. was again an exceptional winner in the East Division 5th and 6th class boys 1200m just ahead of his clubmate Oisin O’Donovan, representing Balymana, in 3rd. Darragh O’Donnel (9th), Sean Colleran (12th) and Zach Keane (16th), Edward Donoghue (24th) and Ethan Beaty (29th) also shone among the 261 competitors to claim a convincing team victory.

In the Senior girls, Sophie Meehan came 4th with teammate Jenna Brady (20) and Katie Murphy (36th) also to the fore in the large field.