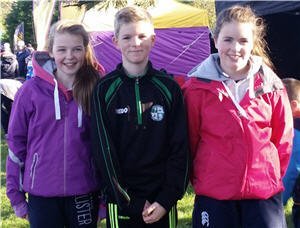 This level of quality is repeated in the juvenile age groups where you have the top 200 in action from each age group in the country. This is the elite of the elite. With perhaps 60,000 kids born in the same year and with each race comprising 2 ages, you are up against the best of 120,000 children born in the same 2 years as you. Often times this can be forgotten when people compete at National level and finish down the field a little – but you are competing against the best of the best and to be even there in the same race is a fantastic achievement.

The best performance of the day for the club came in the Junior Men’s 6000m where Damian O’Boyle had an impressive run to place 11th in the Junior Men’s 6000m in a time of 19:21 – one of Damian’s finest runs in cross country since his debut as an U13 in 2009. Interestingly Damien made his National cross country debut in the ill-fated Coleraine cross country in 2009 and placed 11th in the rerun in Boyle the following February – the same place that he occupied on Sunday against a star-studded field.

Well done to all of our participants. Full results are at:- http://www.athleticsireland.ie/competition/results/