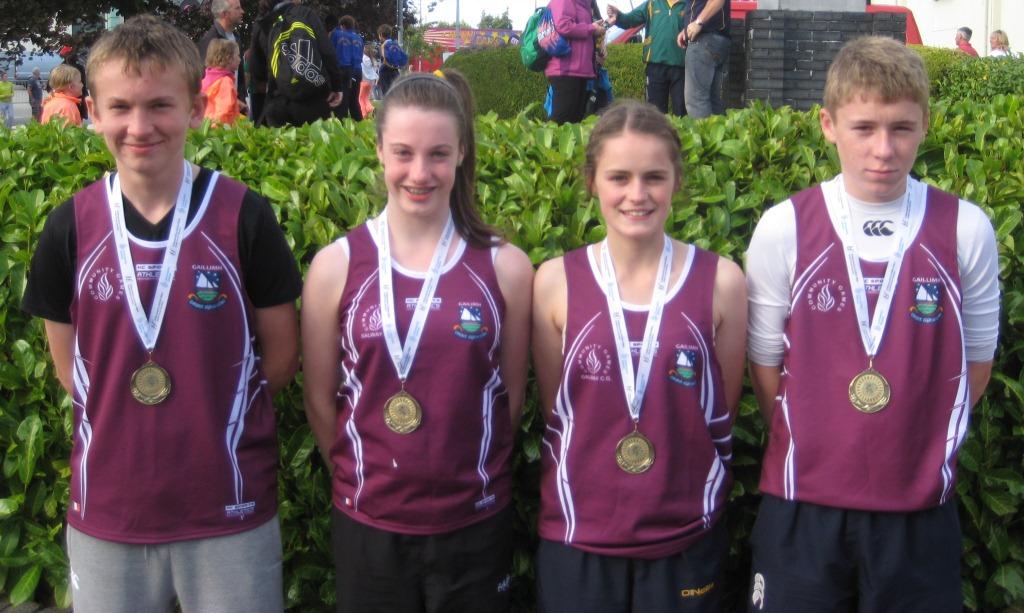 A superb display of baton-passing saw Craughwell’s U15 mixed 4x100m relay team take national honours when placing 4th in the National Community Games finals in Athlone IT. The quartet of Mary Dunphy, Cian Waters, Michelle Duggan and Dylan Finn put in a superb series of performances to place 2nd in their heat, 3rd in their semi-final and 4th in the final to earn their place on the podium. The Community Games award medals to the top 4 teams and this was the first time ever a relay team from Craughwell parish made the podium at National level in the Community Games with the previous best being a 6th place finish by the U16 girls team in 2011 (Maria McNamara, Maireád McCan, Sineád Gaffney, Ellen Fitzpatrick, Gabrielle Tobin) and a similar finishing place for the U15 mixed relay team in 2008 (Ashley McDonnell, Katie O’Donoghue, Pádraic Tobin, Brendan Gallagher, Shaun Gallagher). 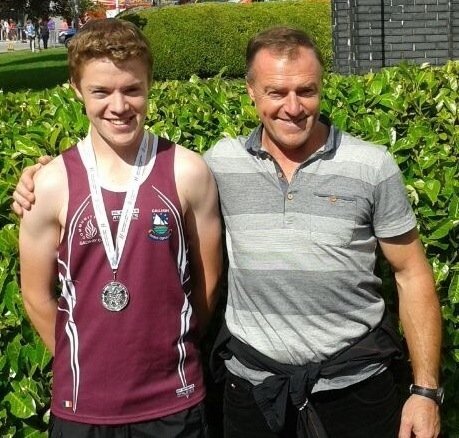 Also hitting the medal podium, Aidan Conneely (who has recently rejoined the club) had a splendid series of runs to take the silver medal in the final of the U16 Boys 100m. This is Aidan’s 4th time on the podium in the National Community Games finals having taken gold in the U10 100m in 2007, silver in the U12 100m in 2008 and gold in the U14 100m in 2009. It is great to see him back at the top! Aidan’s silver medal follows Conor Duggan’s silver in the same event last year … to my knowledge the only 2 Galway men to medal at this level in the U16 grade in the sprint in the last 15 years.

The multi-talented Cian Waters also placed 8th in the U14 shot with a throw of 10.10m – a little down on his best but more than made up for by his superb run in the relay.

Oisin Doyle (representing Athenry area) having won the Galway title a year out of his age, was contesting the U16 1500m semi-final. It didn’t go his way on the day, but if he bides his time there are some exceptional performances waiting inside Oisin in years to come as his strength catches up on his growth.

Oisin Lyons (representing Oranmore/Maree area) had an exceptional performance in the U14 800m. Like his namesake Oisin Doyle, he had won the Galway title out of his age and it was always going to be difficult against athletes a year older. He ran a tactically assured semi-final on Saturday to place 4th and followed this up with a very strong performance in the final on Sunday where he took 6th place in a time of 2.17.1. This was a new PB and achieved despite having to run in unfamiliar sprint spikes which he luckily was able to borrow for the final having forgotten his own.

Final competitor to compete from the club was Caoimhe O’Donoghue (also representing Oranmore/Maree). Caoimhe is used to the Community Games finals having competed in the sprint on numerous occasions placing 3rd in the National finals as an U8 in 2008, taking silver in 2010 in the Galway U10 finals behind Bullaun’s Siobhan McGrath who went on to medal in the National finals, taking gold in the Galway U12 finals in 2012 and going on to make the National final after placing 2nd in the heats and semis. This year Caoimhe triumphed in the Galway finals despite being a year out of age and went on to have a superb National finals, winning her heat and placing 3rd in her semi-final and 7th in the final. The final was held very shortly after Caoimhe was instrumental in leading her Oranmore/Maree U13 basketball team to the National title in the Athlone campus – so a busy weekend for this talented Oranmore athlete.

For those who like statistics, here’s a list of those from the club who have placed in the top 4 (since records began!). If anyone spots any inaccuracies or anything missing, let me know. I have to add in details of the Community Games cross country finals yet.