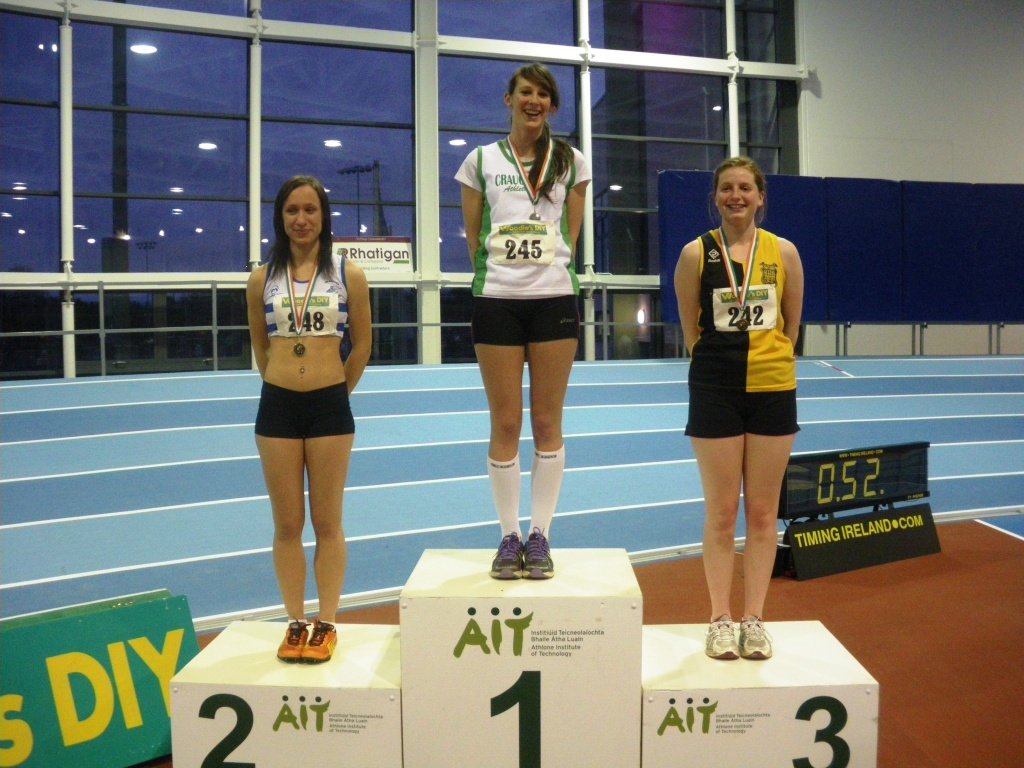 Katie O’Donoghue made history last Saturday on the occasion of the first weekend of competitive action at the fantastic new indoor facility in Athlone IT. Katie was competing along with Damien O’Boyle and Sam McArdle in the National Indoor Pentathlon Championships and the trio became the first 3 athletes from the club to compete at the new facility. The new facility is a dream come true for athletes and athletics fans and being just 40 minutes over the road, it’s going to be a huge bonus to local athletes.

Katie was competing in the Junior Women’s Pentathlon. Touted in the preview on the AAI website as last year’s AAI Indoor U19 Champion and the Irish Schools Champion and one to watch for this event, Katie did not disappoint. She put in a fine series of performances across the 5 events to take the National title by narrow margin amongst the 7 competitors. The events kicked off with the 60m hurdles where Katie ran a blistering 9.92 to move into a slight lead of 9 points, in the process setting a club junior record for the 60m hurdles. 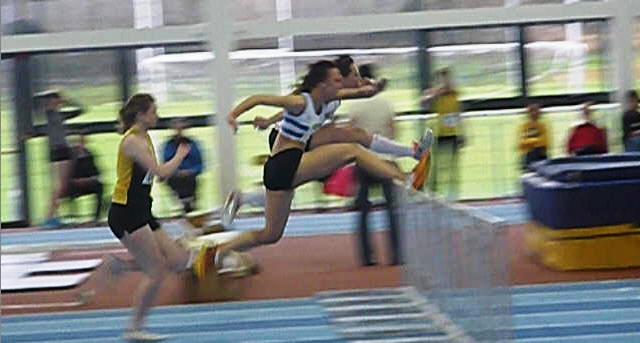 The long jump was next where Katie struggled to get a decent mark on the board, jumping from at least 40cm from behind the break line each time. With a best jump of 4.49m, Katie slipped from 1st to 4th in the overall standings- just 11 points behind 3rd and 10 behind 2nd, with the Celbridge athlete moving into the lead by 135 points with a fine leap of 5.03m. It was all down to the wire for the final event where any of the top 5 athletes could have claimed the National title.

Not knowing what sort of form her competitors were in and not having done a lot of 800m work herself in recent times, Katie set her sights on running a 2:40 time. Helped immensely by the Athlone timing system which had 2 large Seiko clocks placed at the start line and at the 100m mark, Katie ran almost perfect splits to record a time of 2.39.81 – a super performance under pressure. I timed the difference to the leader as 13.x seconds. With between 9 and 11 points awarded for 800m performances in this range, it was going to be a very close call. Much to our delight when the results were posted, Katie took the National title by the narrow margin of 13 points.

Full results of Katie’s event are at:-
http://www.athleticsireland.ie/content/wp-content/uploads/2006/05/combined-events-indoor-2013.pdf 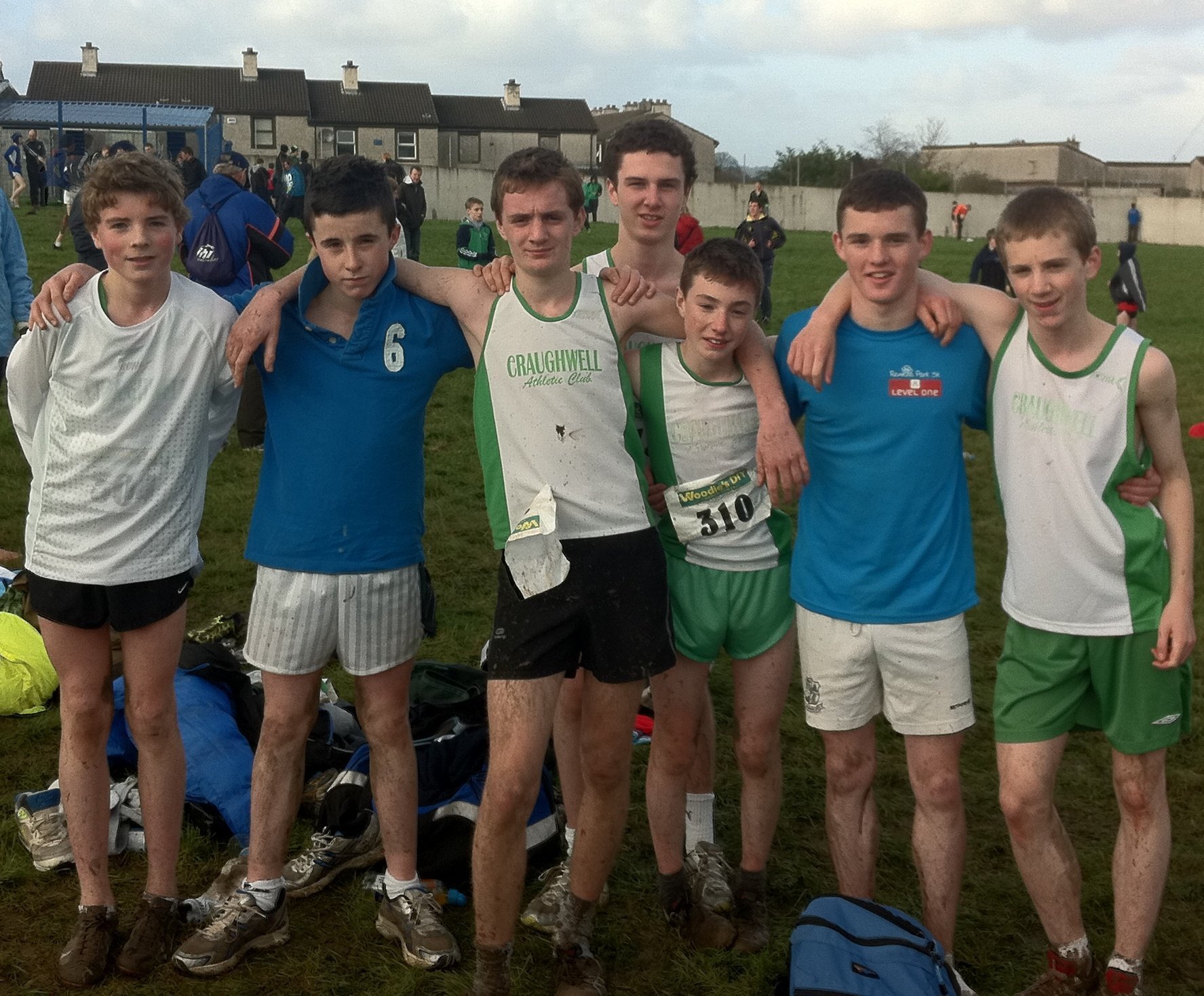 Sam McArdle and Damien O’Boyle completed the history-making trio with Sam placing 11th in the U15 Pentathlon and Damien placing 7th in the Youth (U18) Pentathlon. When quiz-time is taking place in years to come and the question is asked “Who was the first Craughwell AC athlete to compete in the Indoor Arena at Athlone IT”, the answer is Sam McArdle who had the honour of being the first onto the boards when competing in the 60m hurdles. Sam had a good series of performances but particularly in the high jump where he set 3 PBs, leaping 1.36, 1.39 and 1.42. Sam’s remaining results were hurdles 12.2, long jump 3.70, shot putt 8.15 and 800m 2.38.96. Damien had a fine run in the 60m hurdles in a time of 10.55 and followed this up with 1.45 high jump, 4.69 long jump, 8.89 shot putt and victory in the 800m in 2.06.03.

Checkout http://www.athleticsireland.ie/content/wp-content/uploads/2006/05/combinedevents-juvenile-2013.pdf for the full results.

I can’t finish the article without a brief comment on the fantastic AAI Open Games held the following day. Mark has already commented on the detail so I am just giving a brief synopsis from a juvenile perspective. Highlight has to be Nicholas Sheehan’s powerful 1.59.37 to knock 3.5 seconds off the club record that he set last year in Scotland. This is the first time ever that an athlete from the club has broken 2 minutes for 800m, the previous best being as long ago as 2004 when Emmet Farrell ran 2.00.15 in the Universities T&F in Cork. And signs are that we could have several lads under 2 minutes by the end of this indoor season with Conor Gillen running a blistering 2.01.63 in his race with John Cormican recording 2.08.41, Neil Greaney 2.09.04 and Keelan Ryan 2.23.5. Ciara Greene had the honour of becoming the first female athlete from the club to compete in an individual event in Athlone, where she bravely took to the field amongst the senior women and recorded a solid 5.30.05.

Another club record fell to Peter O’Sullivan in the men’s 3000m, breaking 9 minutes for the first time with an incredible of 8.55.84 while Peadar Harvey put in a strong effort in the same race but couldn’t match Peter on this occasion.  Sarah Finnegan placed 5th in the 60m hurdles with 10.26 and in the triple jump with a leap of 10.01. 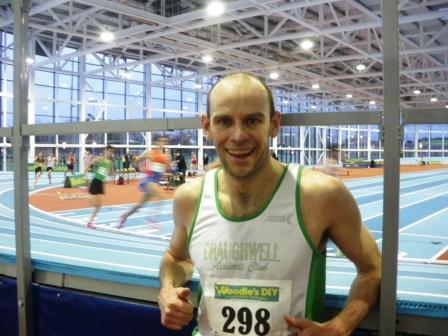 Check out flotrack for some videos of the day, including Peter’s race.