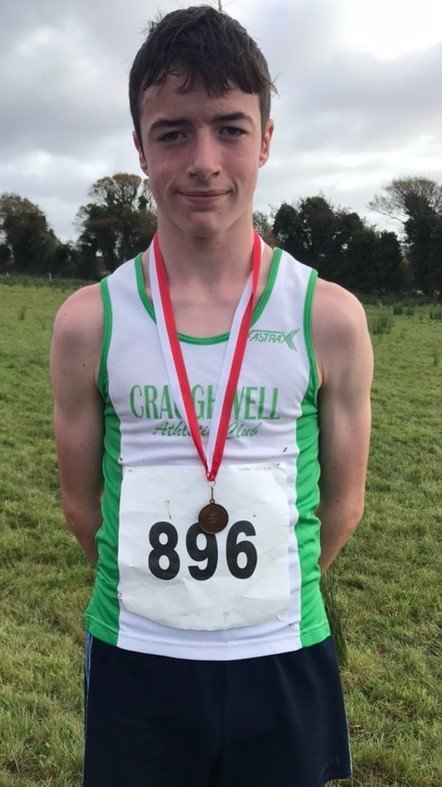 (Firstly, can I apologise for the length of time it has taken to submit this article…intentions were good)

It is always a tough time of year for competition with athletes and parents having to travel significant distances in extreme weather conditions. The first weekend of X Country All Ireland’s in November, proved challenging with Met Eireann weather warnings the night before and black ice on the roads down to Abbottstown that morning. Nonetheless Craughwell had athletes representing ages from U12 up to Junior men/women.

Cross country winter racing is not for the faint hearted and preparing yourself before a race is a huge part of the challenge. There is the extreme cold air to contend with which can literally take your breath away, along with the apprehension of how you will perform; whether you will manage to sprint out from the maddening crowd or take your time at the start to avoid potential injury or getting pushed over and even trampled over. Both the mind and body need to be ready for this onslaught.

Unfortunately, on this morning, this necessary preparatory period was missed by most of our athletes. With the severe conditions of the road causing most athletes to arrive late, racing was delayed by 40mins. There were scenes of athletes jumping from cars to run to get numbers and start their very short or non-existent warm up. With nerves heightened by these experiences our younger athletes coped very well and arrived at the start line a little shaken but nonetheless prepared to do their very best. Mathys Bocquet, (U12) one of our young talented athletes was running both on the Galway and Connacht teams and had a strong run from the gun to storm into the finish in 32nd place. Mathys was the first Galway county runner in and the 4th Connacht runner to finish.

Aoibhinn Keane (u14) found the conditions very tough and yet still managed to score for the Galway county team. (A huge congratulation to Emma Moore (U14) from GCH who during the same race had an incredible 3rd place finish. At All Ireland level this is a remarkable achievement).

Next to run were the U14 Boys where Craughwell on this day had only one brave runner; Ross McGuiness who had a fine performance coming in 70th place.

Unfortunately, due to a recent injury Ailbhe Miskella who held a place on the Galway County team was unable to make the race, which left Ciara Shepard to represent the u16 girls. Ciara also running for the Galway County team has also been battling through injury recently however, faced the challenge with little experience at All Ireland level. Ciara managed to hold her strong position throughout the race and finally finished in 101 position.

In one of the finest performances of the day; Sean Cotter (U15) running up an age in the U16 race battled the mud, cold and hills and at one stage appeared to be around 40th position and out of nowhere with only one lap to go, charged forward and crossed the line in 15th place and the first Galway team member to finish. Kyle Moorhead also ran for Galway and had a fine race.

U18 and Junior men ran together, and as I have mentioned before, it is such a difficult race to watch (never mind run in), as you are never sure who your contenders are until the final results go up. Ben Ryan was competing both in the U18’s race and on the Junior Men’s Galway team (even though he actually age category is U17). Ben’s strong run brought him to a finishing 16th place, falling just a few places off a National medal. Also running in this race and charging to the finish line with only two places between them was Patrick Noonan and Luke Evans. William Fitzpatrick who has trained incredibly hard this season was forced to abandon the race after experiencing difficulties half way through. William not wanting to let his fellow runners down on the day, courageously went to the start line, despite spending the previous two weeks on antibiotics for a chest infection.

For the finale of the All Ireland’s Even Ages; was Ben Ryan’s equally talented sibling; Caron who raced in the Junior Women’s race and coming in 11th place led the Galway County team to 4th place in the All Irelands. All the recent successes of this strong athlete were rewarded when Caron was selected to represent Ireland in 2018 in her debut International Cross Country.

With 3 weeks between the two All Ireland’s our cross-country group continued training relentlessly to see could they better their previous performances. Such energy and enthusiasm were evident down at the field over the following few weeks which saw temperatures plummeting to 1 degree centigrade with ice underfoot around pathways down in renville, oranmore (where they also train).

Hard work and motivation paid off for the athletes who returned to take part in the Uneven Ages All Ireland’s which were held in the WIT arena in Waterford. Again, with the cold weather and distraction of xmas planning it can proof challenging to fit in competitions of such a level. On Sunday the weather was mild, breezy and dry in comparison to Abbottstown, however, the soft conditions underfoot made this hilly course a real challenge for athletes.

On this day in Waterford last Sunday, history was made!

I have looked over the statistics that are so diligently put together by our resident statistician; Mike Tobin, (and unless I am mistaken), Craughwell AC had the finest performances ever, with 3 of our athletes placing 3rd, 5th, 8th.

For the first race of the day, Darragh Reidy, Fionn Higgins and Sean Lavan represented our U11’s and battled hard through very tough race conditions. All three athletes found the All Ireland race pushed them to limits that even the most seasoned of runners would find a huge challenge. Despite harsh conditions they ran extremely well to finish in 100, 102 and 106 positions, Darragh although not medalling was the 6th runner to score on the Galway County Team. A lone runner Fauve Aylmer represented the girls U13’s and in her fine performance was the 3rd Galway team runner across the line and the 5th Connacht runner. She placed 60th.

Next to the start line were are U13 boys; Mathys Bocquet (U12) and Cian Lavan (U13). Mathys replicated his fantastic achievement from the previous weeks All Irelands and finished in a fine position of 43rd. Mathys was the 1st boy to cross the line from the Galway team and Cian the 6th.

Unfortunately, due to last minute injuries/sickness we were unable to send along a full complement of team for our U15 boys. Our duo instead of Sean Cotter and Liam Leen made their way to the start line, where conditions underfoot were now treacherous. We have often mentioned Liam Leen’s ability to turn up to such high calibre races with very little training due to his huge commitment to so many other sports at which he always excels. This young athlete never disappoints and had a steady start and in Liam style worked his way through the field of athletes, in particular in the last lap where he took over several runners and finished in a strong performance to come in 53rd position and 2nd Galway County team runner in.

Sean Cotter has simply gone from strength to strength over the past 3 years, which is shown by the following statistics;

Seán ran out a little more aggressively than Liam from the onset and was in the leading pack of 10 athletes for the first 2k. After dropping back to around 19th position going into the final lap Seán dug deep into his residual energy resources and charging on the straight with only 50m to go was “neck and neck” for 4th place. He was “pipped” at the finish line and with the performance of his lifetime had an incredible 5th place position. There are only a small number of athletes who will ever be able to say they achieved this position in All Ireland’s Cross Country. This is a just reward for this dedicated and motivated athlete.

This was the first of our top 3 places.

Second phenomenal achievement was Ben Ryan’s 8th place finish. After achieving 16th place in Abbottstown, Ben was determined to reach his full potential in this nail biting race that saw him sitting back slightly in the group at one stage and then charging into such a high position, where neck to neck with a few other runners he fought incredibly hard to come in and came 8th. Another All Ireland medal for this fantastic runner.

The final race for Craughwell this day in Abbotstown saw Caron Ryan achieving what few athletes ever have! A third place in a National All Ireland Cross Country Final. I have said in previous articles these medals are like “hens teeth”, a medal that many would aspire to but few achieve, due to the sheer volumes in the race, along with the endurance, strength and bravery required.

As stated by Mike Tobin:

“It has been a phenomenal year for Caron Ryan who was recently selected for the Irish Development Team to contest the Celtic Cross Country in Antrim in early January. Caron’s incredible 2017 saw her place 12th in the National Junior Women’s 4000m in Abbotstown and she followed this up with an amazing 3rd place finish in the National U19 4000m in Waterford IT. Her selection for Ireland is richly deserved for a very dedicated athlete”.

Mike’s photo from previous article: (unfortunately with all the excitement on the day…photo’s were scarce): 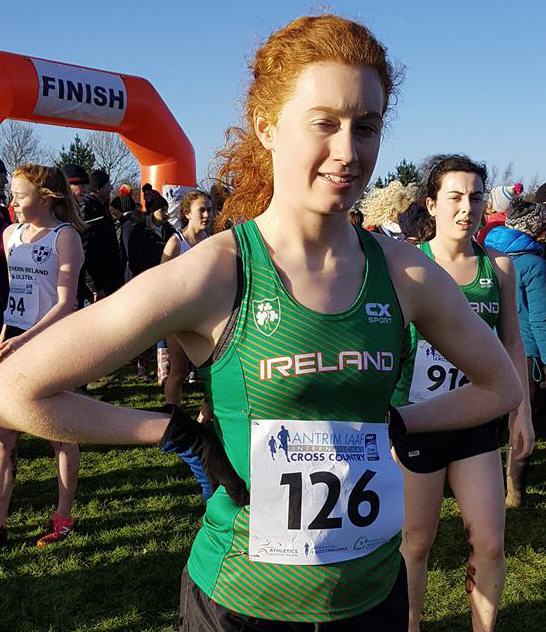