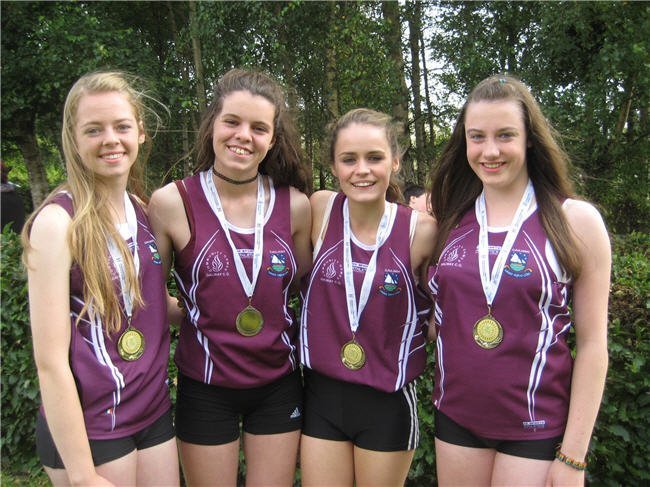 The past weekend saw the National finals of the Community Games take place in Athlone IT with one of the best ever years for athletes from the club. The relays threw up their usual share of excitement with the highlight being a magnificent 4th place for the Craughwell U16 girls’ team in their final in a time of 51.4. The girls were 4th fastest going into the final having placed 2nd in their semi in a time of 52.3 and 2nd in their heat in a time of 52.9. It was the best ever performance from a girls relay team from the club in the Community Games relay.

The previous best was 6th place by the U16 girls in 2011 (Sineád Gaffney, Maria McNamara, Maireád McCan and Ellen Fitzpatrick) while back in 2007 the U16 girls won Galway and looked very impressive in the first round of the National finals with their team of Cathriona Farrell, Rachel Finnegan, Rachel Kenny and Leah Creaven but unfortunately they were eliminated on a marginal zone fault. The 2014 performance equaled the 4th place obtained by last year’s U15 mixed relay team of Mary Dunphy, Dylan Finn, Michelle Duggan and Cian Waters.

In the individual events, the stars of the show were Oisin Lyons and Matthew McKernan (both representing Oranmore/Maree). Oisin ran a very astute race in the semi-final of the U14 800m on Saturday, finishing in 2nd place in a time of 2.16. On Sunday, the race erupted into a fast pace from the gun and Oisin was initially placed towards the back of the field but worked his way up into 4th over the first lap. At the bell, the leading group began to pull away and Oisin was well placed in the midst of them. Going wide on the penultimate bend, Oisin moved onto the heels of the top 2 athletes. As the pace quickened down the back-straight, Oisin held 3rd place but things were very tight with 5 or 6 athletes in the group. Holding 3rd place as they rounded the final bend, Oisin drove for home opening a small gap along with the Meath athlete over the chasing bunch who were only meters behind. It was a two-horse race with about 40m to as they had edged 4 or 5m clear. Just as well as there was carnage behind them on the track when 2 of the chasing pack took a tumble and hit the tartan. The leading pair were almost joined together for the remaining 40m with the Meath athlete just shading it to take the gold and Oisin taking silver in a very impressive time of 2.06.4 – a massive PB for Oisin.

Also in the medals, Matthew McKernan put in a stellar performance in the U16 triple jump. Leaping into a headwind, all of Matthew’s jumps were close to the 12m mark, with the victor the only one to leap over the 12m. Matthew claimed the bronze medal with a leap of 11.78m – his second National medal of 2014 to add to the one he won last year. Matthew has made incredible progress over the last few years and it won’t be long now before he starts to shatter our club senior records in both triple jump and long jump. 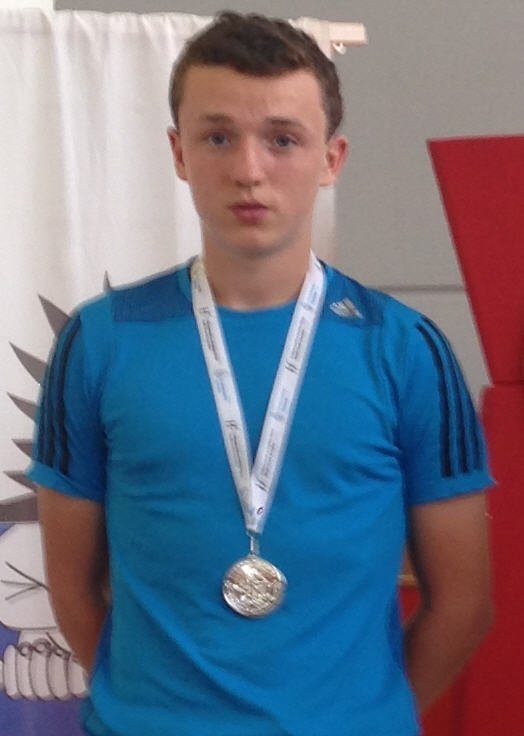 Aisling Keady showed she is getting back to her best when clearing 1.50m easily in the U16 girls’ high jump in windy conditions. It was Aisling’s best performance since her indoor victory in March and she came very close to clearing the 1.55m – the height that took both the silver and bronze medals – just pulling the bar off with her lower leg on her final attempt.

Caoimhe O’Donoghue (also representing Oranmore/Maree) put in a strong performance in her heat to take 3rd place and make the semi-finals of the U14 girls 100m. Caoimhe went on to take a magnificent 3rd place in her semi-final before taking 5th place in the final on Sunday, a super series of performances. In the U16 girls 100m, Michelle Duggan had the misfortune to be placed in the same heat as the eventual top 3. She had a super race to place 5th and just miss out on a semi-final spot. 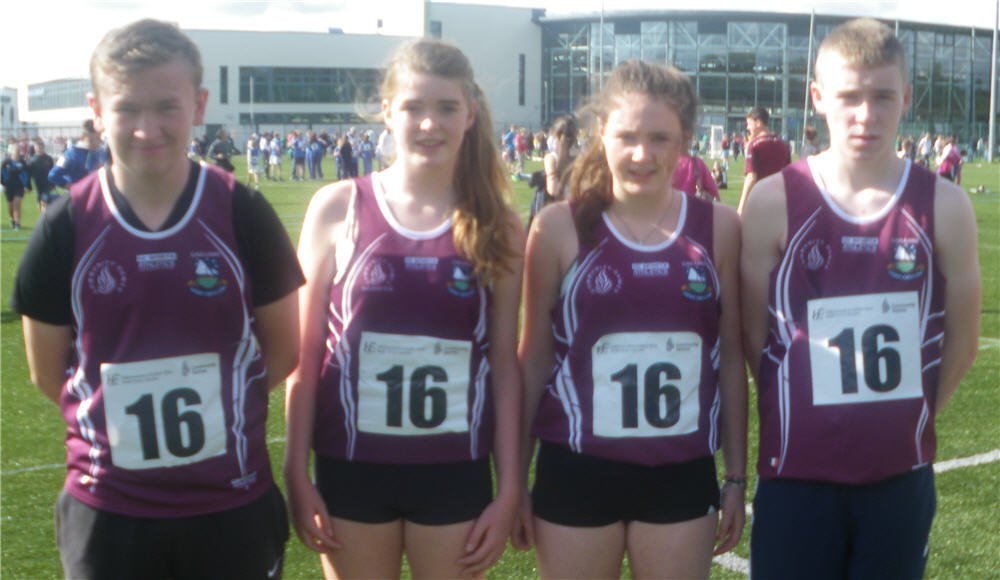 The U15 mixed relay team of Aoife Walsh, Dylan Finn, Laura Cunningham and Cian Waters had a fine National finals also – winning their heat comfortably in 52.7 before taking 4th place in their semi in 52.6. Eighth fastest going into the final but less than a second behind 5 of the other teams, it was all to play for in the final. The team battled hard with a slight improvement on their time with a 52.5 in the final but having to settle for 8th place – nevertheless a great performance all around. The U13 mixed relay team of Eva Kelly, Finbar McFadden, Mia Waters, Ryan Gallagher and Kyle Moorhead had the misfortune of slipping twice on the track (pity the athletes cannot wear spikes in that age group) and didn’t make it through the heats. But they can still hold their heads up high as Galway champions and there will be plenty of opportunity in the years ahead in the U15s and 16s mixed relays to do themselves justice.

Elsewhere on the track, both Kyle Moorhead and Liam Moran had super runs in the heats of the U12 600m and U16 1500m to make the finals. Kyle ran his 600m semi like a true professional, going with the leaders when they kicked with 300m to go and placing 4th in a time of 1.51.1. A high speed 600m final ensued the following day with Kyle running strong to place 9th or 10th. Liam Moran (representing Clarinbridge) ran a strong 1500m semi, initially going into a substantial lead before easing back and finishing 6th in 4.54.9. In the final, Liam battled hard to stay with the leaders for the first 1000m of the race and fell back a little in the final 500m but held on for 9th or 10th place. In the field events, Finola Kelly (representing Oranmore/Maree) had a series of good jumps to take 7th place in the U14 long jump while Laura Cunningham jumped 8.79m to take 9th place in the U16 girls triple jump – very promising for Laura who still has a year left in this age group. Likewise Eva Kelly had a strong performance in the U14 girls shot putt where she placed 9th or 10th with a year more in this age group next year. 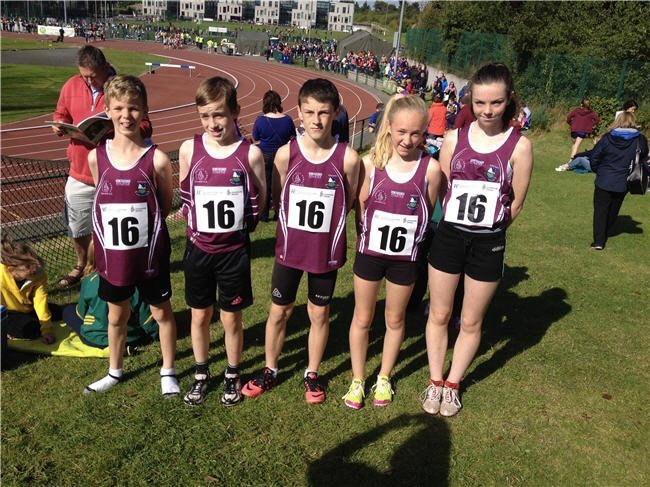